Sanctions tit-for-tat between Russia and the West keeps going on.

Yesterday, Canada announced new economic and travel sanctions against Russian banks and high-ranking officials to match the latest round of of the EU and the US measures (see: http://trueeconomics.blogspot.it/2014/08/282013-sanctions-v-russia-some-fallout.html).

Canadian Prime Minister Stephen Harper said that: "Export restrictions announced by the European Union with respect to military and military dual-use goods destined to Russia are already in place in Canada. We are also committed to imposing the necessary regulations to enact export restrictions on technologies used in Russia's oil exploration and extraction sector. Those will be implemented in parallel with our allies."

The Russian entities hit by the sanctions are:


Canada's list of sanctioned individuals excludes three business owners who are sanctioned by the US and EU, but have extensive business interests in Canada. The full list of entities and individuals impacted by Canadian sanctions is available here: http://www.ctvnews.ca/politics/canada-to-deploy-military-supplies-equipment-to-ukraine-ctv-news-1.1948163

What Russia is doing to mitigate the adverse effects of sanctions?

1) Imports substitution (long-term process) - ramping up production of components usually imported by its own defence industries to replace supplies lost due to sanctions and Ukraine trade disruption. For example:

2) Imports switching by substituting new longer term contracts for supply of goods and services in favour countries that are not imposing sanctions. Three examples:


3) Longer-term exits from the markets:

In retaliation against Western sanctions, Russian President Vladimir Putin on Wednesday signed a decree limiting the import of agricultural, raw and food products from countries that imposed sanctions against Russia. Moscow banned, for one year (mating duration of Western sanctions) imports of all meat, fish, dairy, fruit and vegetables from the US, EU, Canada, Australia and Norway.

Further sanctions are likely. These are expected to impact:


Conservatively estimating the sales via subsidiaries and distributors, Irish exports to Russia run at around EUR800 million, with roughly 1/3 of these coming from Agriculture, Food and Drinks sectors.

Some estimated 42% plus of these sales come from sectors dominated by Irish indigenous companies with roughly 50% of these accounted for Irish SMEs. There are some really brilliant examples of smaller Irish firms entering Russian markets in recent years and obtaining long term contracts to provide specialist goods and services that are provided from Ireland with zero tax arbitrage component to value added. In other words, when it comes to our trade with Russia, we have much higher indigenous jobs creation and real economic activity generation per euro of exports to Russia than from our exports to other major trading partners. 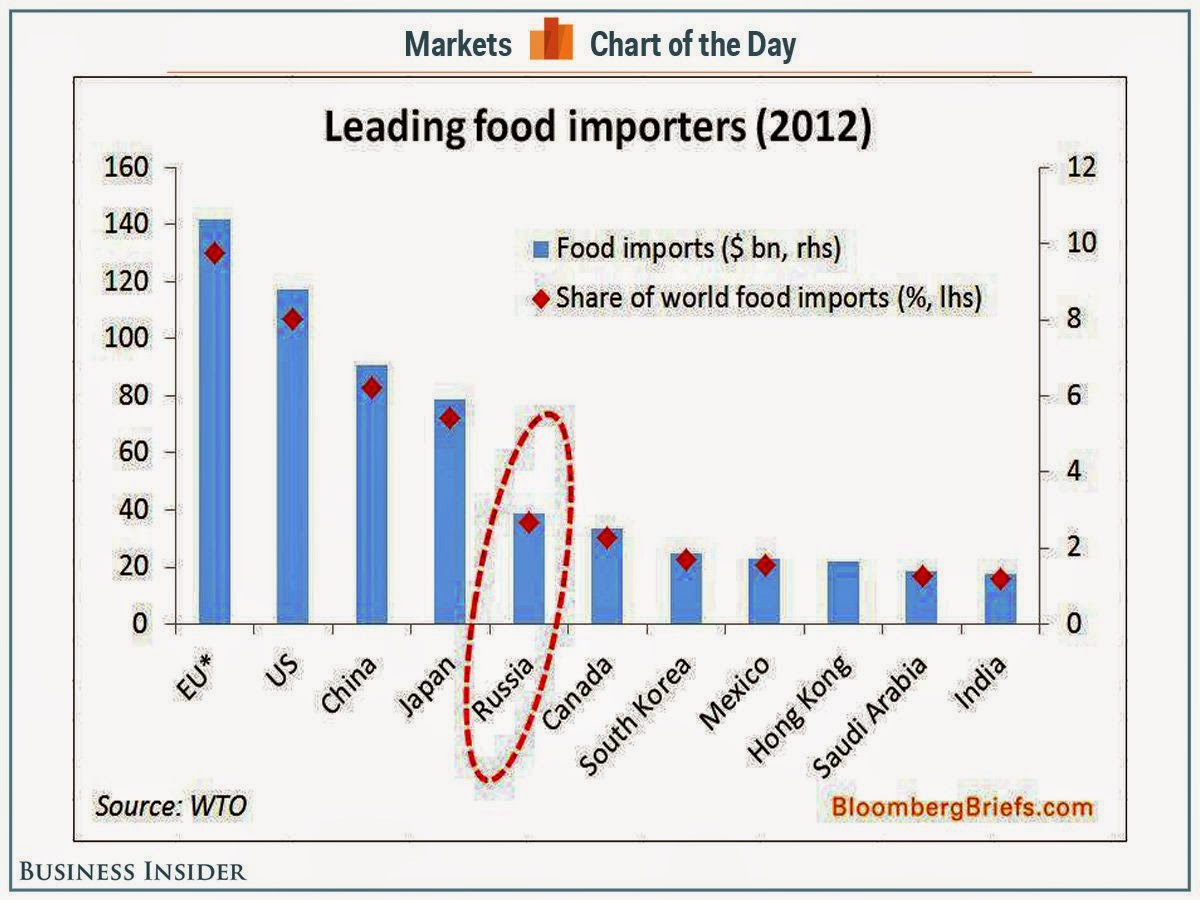 Net conclusions: sanctions response by Moscow will cost Russian consumers through increased prices. That is beyond any doubt. But the sanctions will be supportive (in the medium term) of improved agricultural production and food sector development in Russia. This effect is similar to the one achieved in the devaluations of the ruble post-1998 crisis. Sanctions by Moscow can have a significant impact on smaller open economies of Europe, like Ireland, with this impact concentrated on smaller domestic indigenous producers. If sanctions are broadened to include drinks, there will be even more substantial declines in Irish exports. It is clear that there will be no winners from the tit-for-tat sanctions wars.
Posted by TrueEconomics at 1:36 PM