This is part 2 of two-parts series on Italian economy. Part one is available here: http://trueeconomics.blogspot.com/2014/08/2482014-italy-lifeless-liner-on.html?spref=tw


In Italy, SMEs represent over 80% share of the total economy in terms of employment and almost 70% of value added. In North-East, family businesses hold an even larger share of economic activity. But SMEs credit performance for the economy as a whole is third worst in the euro area, as highlighted in the July note by the IMF: 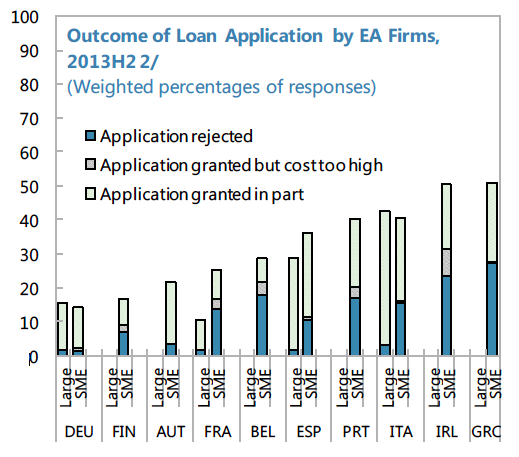 A baker running three busy shops in the area raises as his first complaint high taxes on business, second - high taxes on households and third - lack of credit. For generations, his family owned the bakeries that supply local communities with fresh goods, working from 3 am through evening 6 days a week. Now, the banks with which they have been dealing over the decades are no longer lending, equipment is starting to experience more frequent failures, and customers are slipping into arrears. He holds a ledger of customers credit, like many other shops around, and says majority of businesses in towns are bartering food for small work.

Overall debt levels in the Italian economy are relatively high, as noted in the chart below from the IMF (2014): 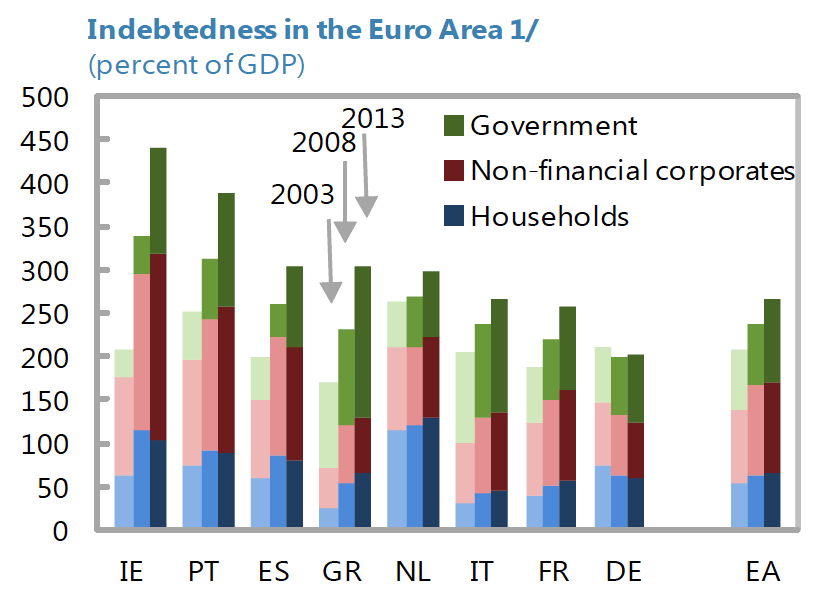 And deleveraging is slow (same source): 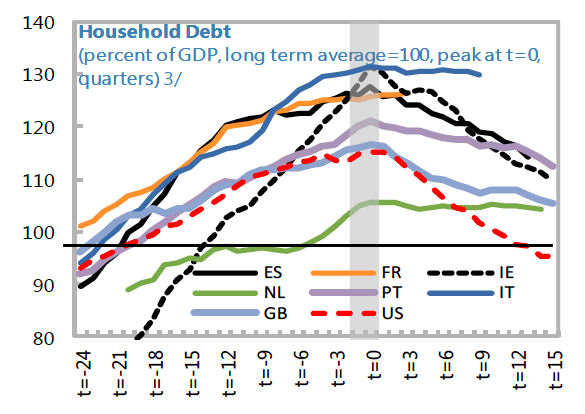 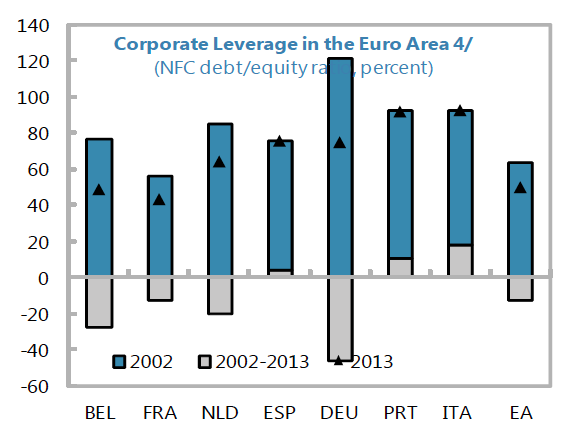 Which means that the current state of affairs (tight family budgets, lack of discretionary spending and dire lack of investment) is here to stay. With it, as IMF shows, there is a negative relationship between total private sector debt and subsequent growth rates in the economy: 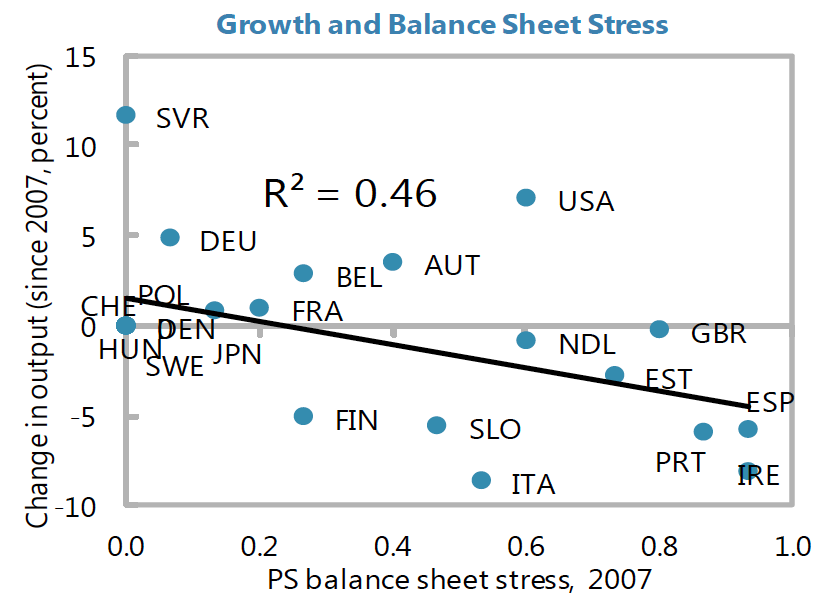 But this relationship in Italy's case also shows that structural problems in the economy (as in the case of Slovenia, Finland and to a lesser extent Ireland and Portugal) compound the adverse effects of debt overhang. In other words, private sector debt overhang appears to account for smaller share of growth pressures in Italy than in other EU states. Which is, actually, bad news for two reasons:


One of the structural drivers for slower growth in Italy, as opposed to other comparable economies is labour cost competitiveness:

Charts above clearly show that crisis-related improvements in Italian economy's labour cost competitiveness are lagging those in other 'peripheral' countries in absolute terms. In relative (to EA17) terms, the country has posted a loss in productivity over the years of crisis that is deeper than for any other country covered in the IMF sample above. This loss in productivity was not offset by the declines in direct labour costs. Thus, in the nutshell, while Italian labour became less productive it also became lower paid - a twin problem, as the former reduces economy's capacity to compete in the international markets, while the latter hammers domestic demand (consumption and investment). It is a tale of 'head sinks, tail sinks' dynamic.

The relationship between high private sector debt levels and weak economic performance, alongside financial and fiscal repression measures suggests that Italian corporate default rates would be somewhere around, but below, those of Spain and Portugal. This is supported by the data: 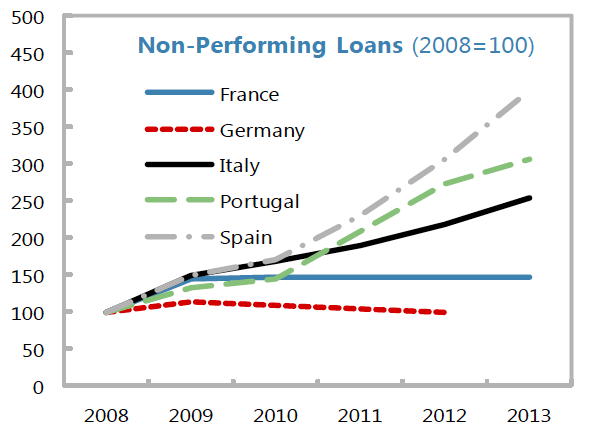 And the above does not reflect credit deterioration in trading sector that can be expected under the Russian sanctions. One of the largest producers of prosciutto in the famed city of San Daniele spots rows and rows of ham legs drying out labelled for the Russian market. The curing facility stretches over 1/4 of a mile and 'Russia-bound' ham is about as dominant as that set for the U.S. The final destination of the former is now highly uncertain, but trade and production credits used to fund it are going to come due.


Back in the piazza of the regional capital - at the junction of the North and South main streets mentioned in the first post - five banks once stood opposite of one another. Two branches are gone completely, the third one has shrunk to about 1/4 of its original footprint. All remaining beaches' windows are peppered with offers of mortgages and business loans at seemingly benign rates of around 2-2.5% above the 3mo EURIBOR. None, according to the local business people and ordinary homeowners I spoke to are actually lending. While diffusion index for lending standards in Italian banks has finally posted some signs of easing at the end of Q2 2014 (see chart below based on Banca d'Italia data), overall conditions remain tight and the recent easing itself is statistically weak. Meanwhile, Banca d'Italia lending surveys show that aside from nominal pricing of the loans, loans approvals conditions continued to tighten at the end of Q2 2014 for collateral requirements, and remained unchanged for margins, non-interest costs and charges, size of loans issued and covenants. 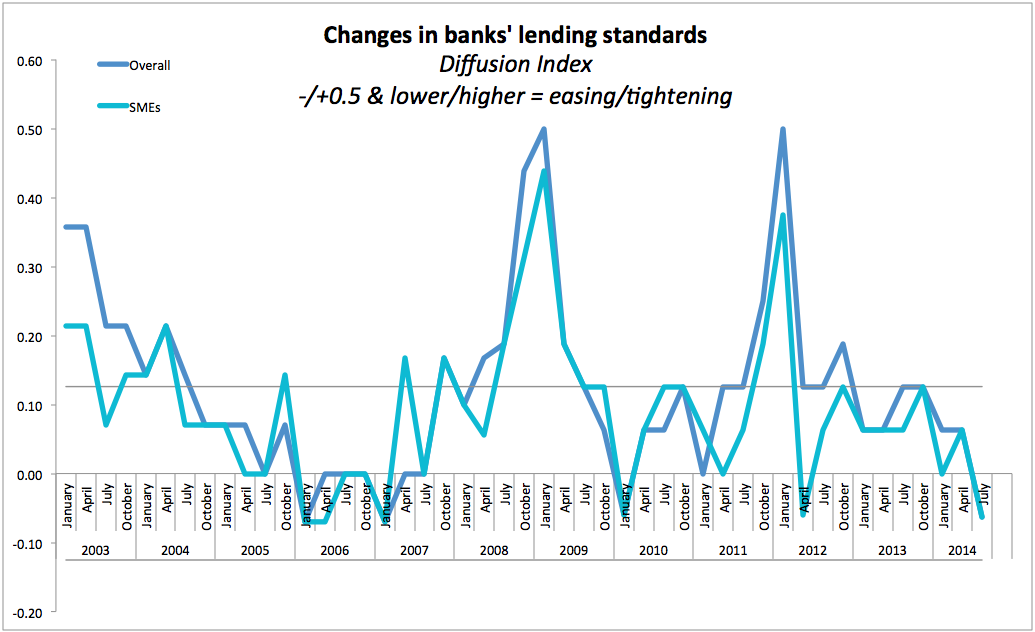 All of which is showing up in the aggregate credit supply statistics: 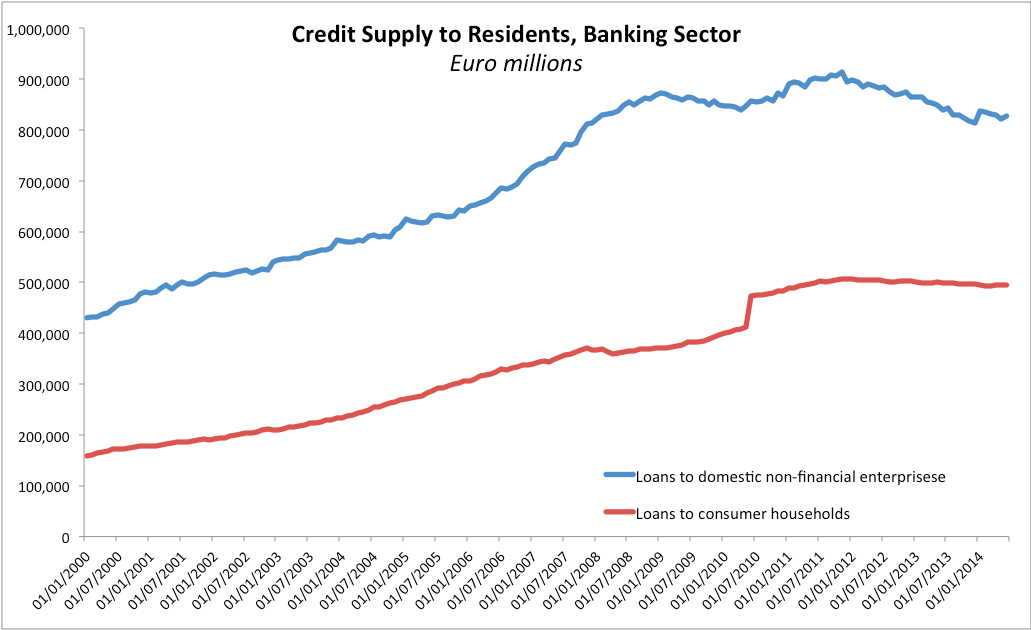 As the chart above shows, domestic resident enterprises stock of credit has failed to recover from the crisis-period decline that set on in late 2011, while domestic households loans (relating to consumption) have remained on the gently declining trajectory since early 2012.


Lacking consumer spending, suffering from high taxes and prohibitive regulatory environments, credit-less and wanting for structural reforms, majority of which, even when enacted, are not followed through, Italian economy is now an ageing liner listed lifeless on the rocks with no tide coming in to lift it off and no repair crews dispatched to make it right. 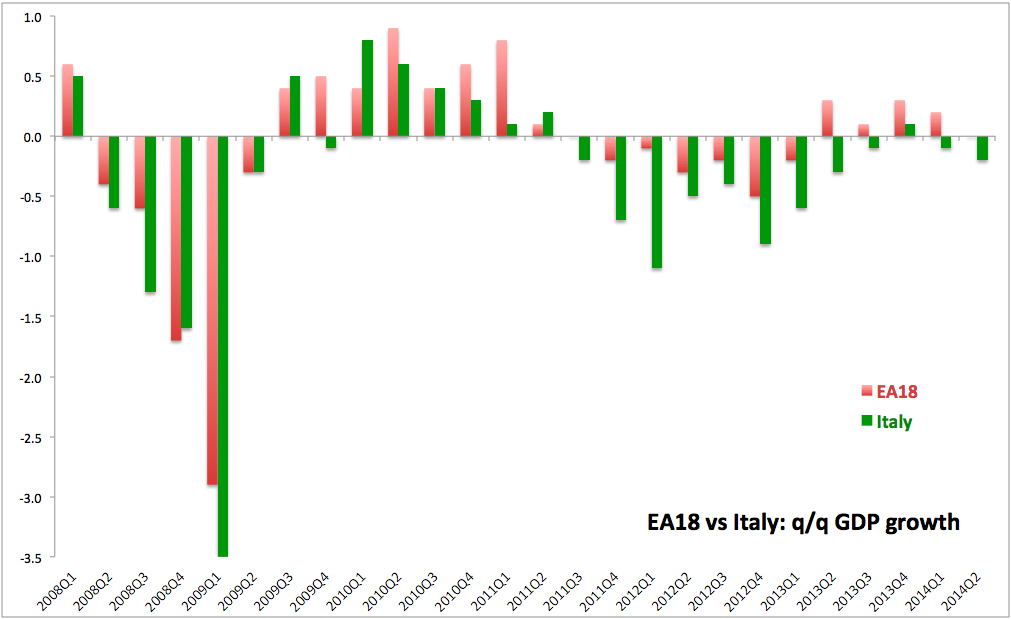 Per latest Eurostat estimates, Italy's real GDP H1 2014 was 9.1% below its pre-crisis peak  and 9.2% below the levels registered at the end of 2006. Country real GDP index now stands at a historical low - performance only comparable to that of Cyprus with every other euro area economy having seen at least modest increases in real GDP compared to the crisis trough. 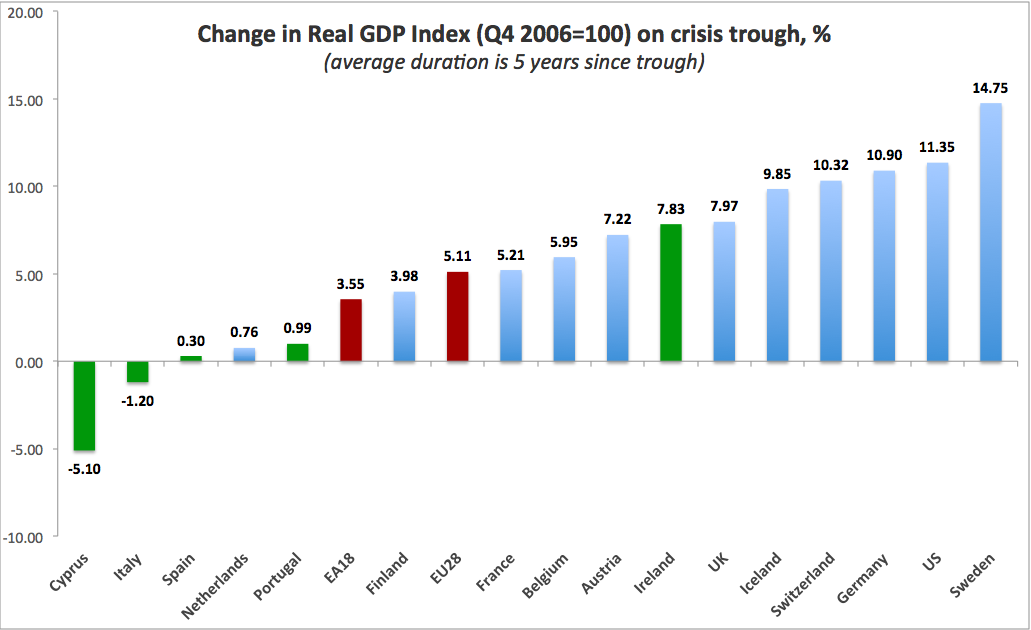 A telling sign of the decline is a small piazza in the regional town, sporting a busy local cafe previously frequented by the local families with kids drawn to a small pet shop next to it, a fountain, previously a focal point for migrants' families working in nearby factories producing luxury goods and high value-added manufactures, and a quiet small grocery store, beloved by the older families and the retired folks. Today, the piazza is quiet: migrant families gone. Local residents tell me that the 'Indians' have moved out, leaving behind falling rents and family-friendly social vibe they helped to define. The cafe is nearly completely empty, with no traditional noise and bustle of local families under the big umbrellas. The grocery store - in place since the 1970s - has gone out of business. One can, for the first time ever, hear the water trickling in the fountain and enjoy a glass of local, brilliantly unique, wines in solitude and calm... a somehow sad calm... a calm of something something gone, something irreparably missing...

Either a heavenly slice of economic hell or a hellish corner of cultural haven, Italy is a society which is facing into a prospect of economic non-future within the euro area. That this conclusion is obvious in the heart of its once vibrant corners - the proudly work- and family-centric North East - is simply damning and infinitely sad.
Posted by TrueEconomics at 12:54 PM

Retail business in Italy and elsewhere is also being affected by move to online shopping. With etailers like amazon operating at wafer thin margins, free shipping and returns, for many goods the brick-and-mortar (with related overheads) based store cannot compete. This is something that city councils need to heed.