This far we know. We also know that:


A recent (December 2011) study by Davis, Steven J. and von Wachter, Till, titled "Recessions and the Cost of Job Loss" (NBER Working Paper No. w17638: http://ssrn.com/abstract=1967372) looks are the evidence on "the cumulative earnings losses associated with job displacement, drawing on longitudinal Social Security records for U.S. workers from 1974 to 2008."

The findings are striking:


The authors "also document large cyclical movements in the incidence of job loss and job displacement and present evidence on how worker anxieties about job loss, wage cuts and job opportunities respond to contemporaneous economic conditions." Specifically they find that "…the available evidence indicates that cyclical fluctuations in worker perceptions and anxieties track actual labor market conditions rather closely, and that they respond quickly to deteriorations in the economic outlook. Gallup data, in particular, show a tremendous increase in worker anxieties about labor market prospects after the peak of the financial crisis in 2008 and 2009. They also show a recent return to the same high levels of anxiety. These data suggest that fears about job loss and other negative labor market outcomes are themselves a significant and costly aspect of economic downturns for a broad segment of the population. These findings also imply that workers are well aware of and concerned about the costly nature of job loss, especially in recessions."

Here's a chart to illustrate the empirical dynamics of earnings losses due to job loss. 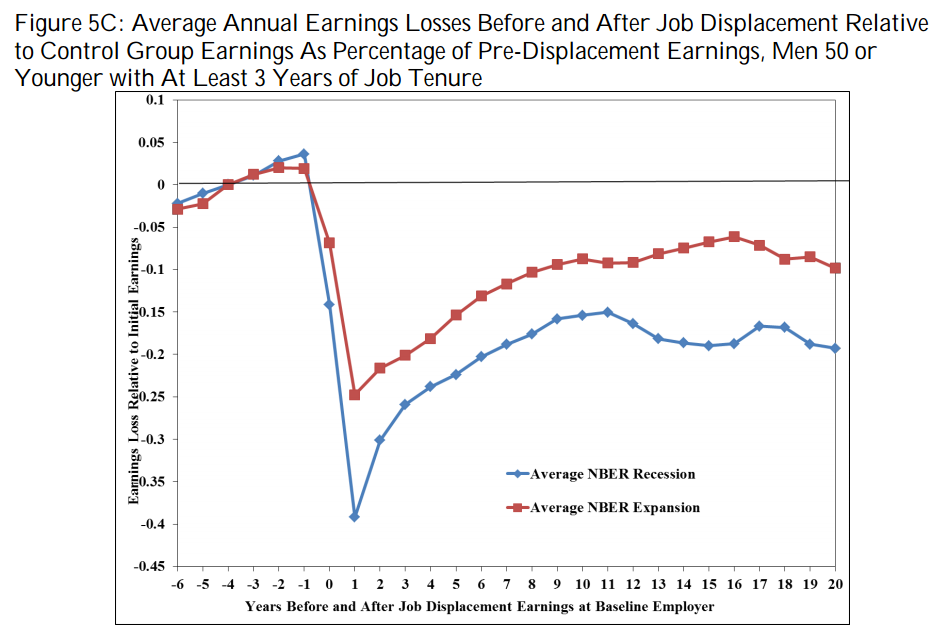 Posted by TrueEconomics at 4:57 PM

There doesn't seem to be much data on the effect of high covered employment/population ratios on society as a whole. Is there a fallacy of composition problem, in which high covered employment is detrimental? There is no significant sector for workers to come from or go to. Lifetime costs have to be paid from current wages. Historically formal employment was an order of magnitude less.

The individual may benefit by employment, but beyond a certain point it is a negative for the economy.