This is part 1 of the two-parts post on the current economic conditions in Italy.


A North-Eastern Italian provincial capital - a normally buzzing and lively medieval city with proud Roman history and previously vibrant high value-added industries and high tech services sits quiet and semi-deserted on the weekend afternoon. This August, a slow month by normal metrics of shoppers numbers and restaurants and cafe's patrons counts, is marked by the waves of recent closures of small businesses across the province. It is also marked by the official return of Italy to a recession - its third one since 2008.


The two halves of the pedestrianised main street tell the tale of the country-wide economic demise.

On the South side of the old piazza, the main street is dotted with few empty shop fronts. Established as a trading centre of the city centuries ago, this section of the city centre is primarily occupied by shops and businesses that owned their buildings over generations. No rent to pay means the businesses remain open, even as international and Italian brands are shutting down their local operations. The vacancy rate of shopfronts is running at around 10% here.

The Northern side of the street is smarter, better designed and more modernised. It was 'regenerated' in the mid-2000s and populated by trendier shops and eateries catering to Yuppie customers. Back in 2007-2008, the street was abuzz with activity: well-dressed patrons, predominantly under the age of 40 browsing in the cutting edge designer stores and boutiques, while visitors from the province and beyond soaked in the atmosphere of the new social hub in cafes, enoteche and trattorie. This year, more than three out of four businesses are shut, empty windows and closed doors greet a rare passerby. Unable to fund rents, as well as high taxes and charges, smaller business owners have gone under. Those supplying locally-demanded daily goods, such as fresh groceries, are trading elsewhere, some dealing exclusively in cash with their established customers. Majority are simply gone. 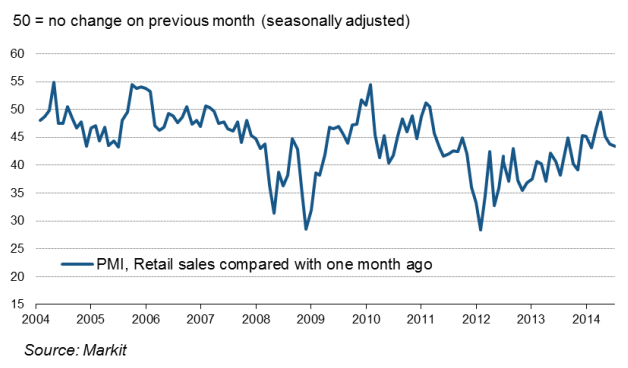 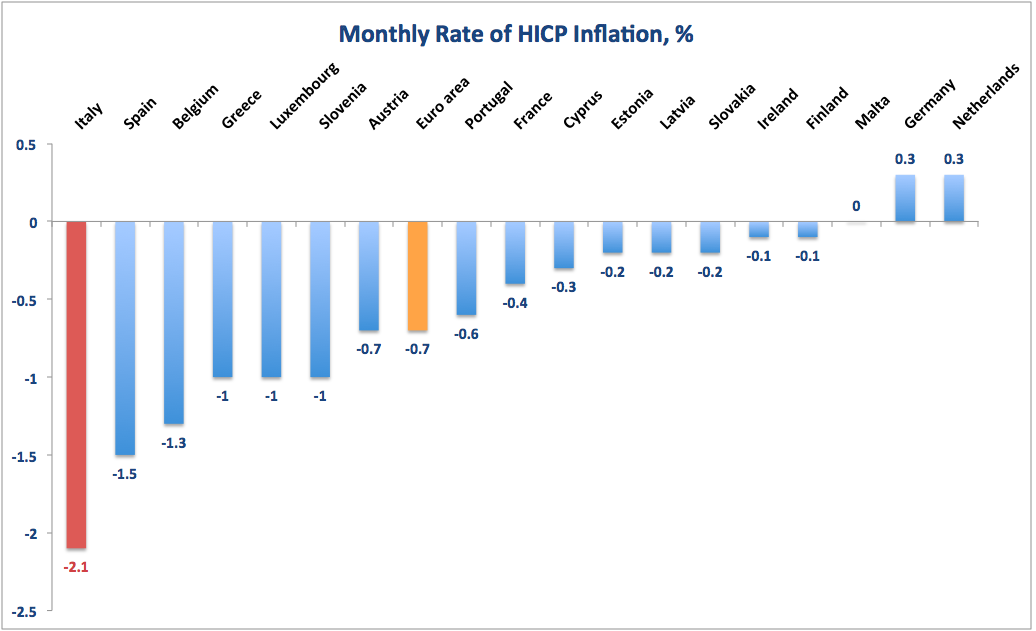 Few kilometres down the road, another wealthy Northern Italian town is showing the same signs of decline. A builder, having completed an apartment block in 2009, was forced out of business by the city authorities saddling his business with the staggering cost of rectifying a planning error committed by… you guessed it, the city authorities. After sitting on the market for 4 years with no takers, the apartments went for auction  earlier this spring. Guiding prices ranged from EUR20,000 for a one-bedroom to EUR46,000 for three bedroom flats. Back in 2004-2006 these properties would be sold off-plans for around EUR150,000 one-beds and EUR280,000 for three-beds. The auction flopped: out of 21 properties on the market, only 9 sold. Prime city-centre retail space on the ground floor of the building remains only 1/5th occupied.

Country construction sector activity is still down 43% on the pre-crisis peak (the sixth largest decline in the euro area) with Q1 2014 reading marking all-time low, the only country in the euro area with construction posting historical low in 2014. And housing markets are singing blues. From the beginning of Q2 2013 and through the end of Q1 2014, Italian house prices fell 4.43%, while euro area as a whole experienced house price deflation of just 0.3%. Within the euro area, only Cyprus and Slovenia posted worse 12 months cumulative performance.


Four internationally trading factories, including two suppliers of high-tech household equipment with export markets around the world, have shut doors since the onset of the Great Recession - all employed more than 200 people each at the peak and all have been in business for decades. In a telling sign of the times, one smaller family firm, counting five generations in business and trading with some exports, closed down while the proprietors continue to trade on a highly reduced volume. New trade is all local and cash-only. Across the area, work supplied directly to consumers is now being routinely quoted priced 'with receipt or without' and in many cases, even registered sales of goods and services are openly under-declared on invoices to avoid VAT and profit taxes. 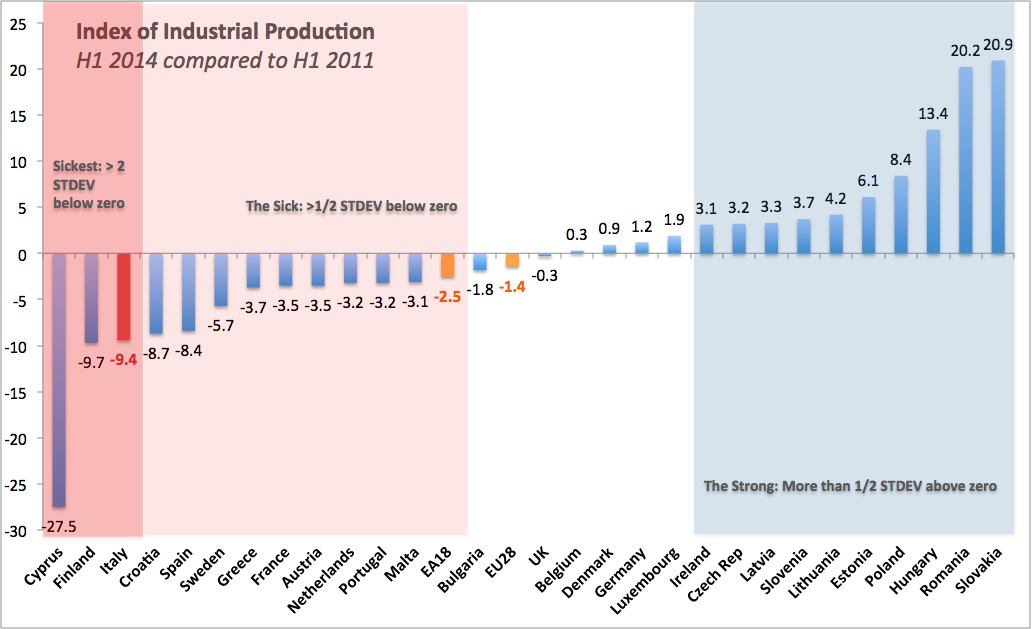 An area once a magnet for labour migrants from Italian South, Eastern Europe and Asia is now once again sending emigrants to Germany, the UK, US and Australia.


On the good news side, Italy's trade surplus (goods only) is up from EUR8.2 billion in January-May 2013 to EUR14.1 billion in January-May 2014, but more than half of this improvement (EUR3.7 billion) was down to decline in imports, with exports increases accounting for just EUR2.2 billion. On a seasonally-adjusted basis, Italian exports were down 3% m/m in June 2014 and country trade balance has deteriorated from EUR1.9 billion surplus in May 2014 to EUR1.7 billion in June.

These figures are not reflective of the Russian sanctions against the EU that came into effect in July 2014. In my conversations with a number of local residents, sanctions loom large. Local area businesses supply higher-end luxury household goods to Russia and via Russia, the rest of the CIS. Some - such as producers of luxury bathtubs and bathroom equipment - are impacted only indirectly, via general slowdown in Russian demand. Others - such as suppliers of premium food and wine - are fearing for their business in the wake of Russian government retaliatory sanctions of agricultural and food imports from EU. All are worrying about energy costs impact of the Ukrainian mess.


Then there's Italian Government. The country fiscal problems are epic even by already stretched euro area standards. IMF forecasts 2014 General Government debt to reach 134.5% of GDP even before the latest data pointing to a possible economic contraction for the full year GDP. That is the second highest public debt burden in the common currency area after Greece. Between 2012 and 2014, Italy's Government debt is forecast to increase by EUR144.2 billion with cumulated Government deficits amounting to EUR193.9 billion in 2011-2014, of these EUR105 billion is structural deficits. Country structural deficits are rising, not falling, up from EUR5.5 billion in 2013 to the projected EUR13.3 billion in 2014. At current bond yields, Italy needs ca 2.5% annual growth in GDP just to stay on a flat debt trajectory. Based on its current outstanding debt mix (referencing maturities and associated yields), this number rises to over 3.3%. 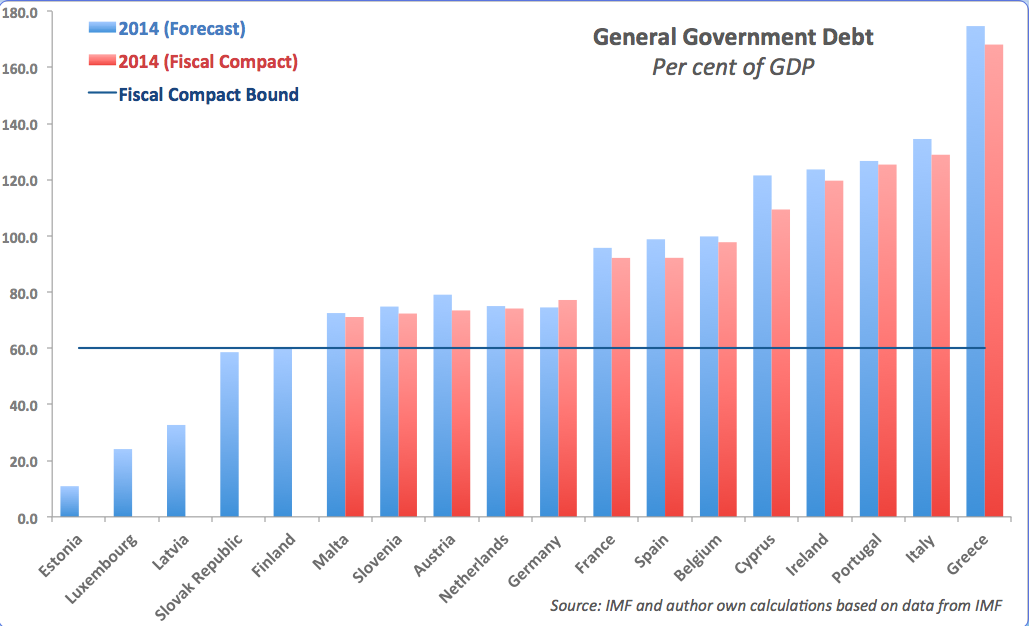 While on debt topic, corporate indebtedness is not improving either, despite years of austerity and financial repression. Here's the latest summary from the IMF (July 2014) covering leveraging levels across main euro area economies. Italy's corporate leverage is getting worse faster than any other euro area economy, save Greece and Portugal. 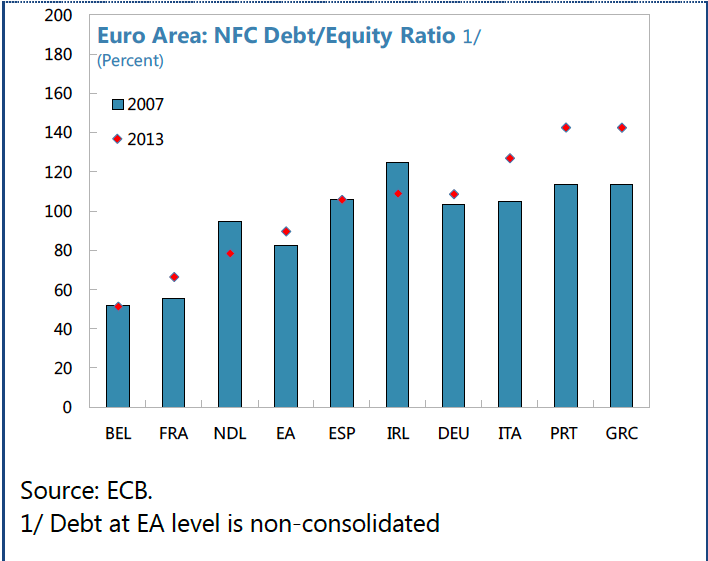 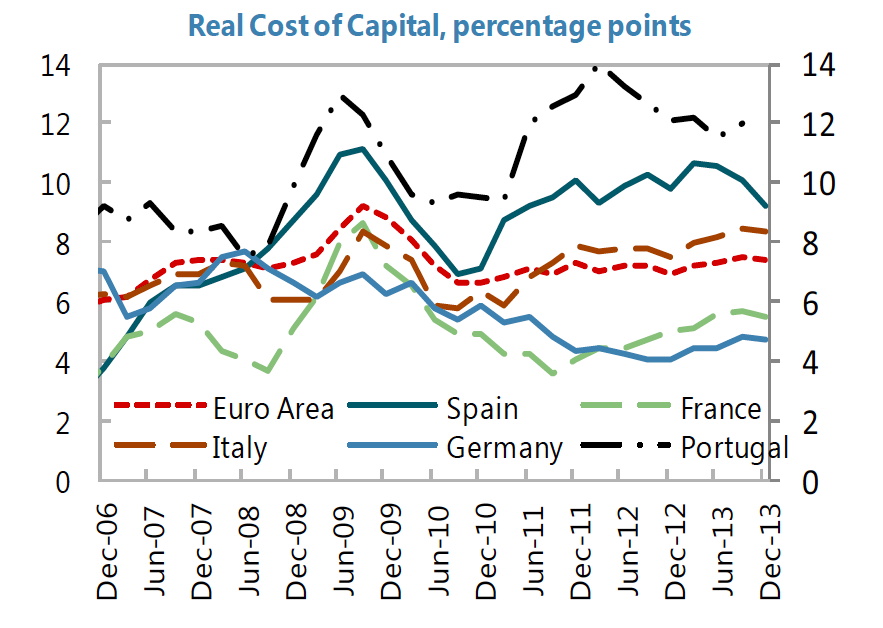 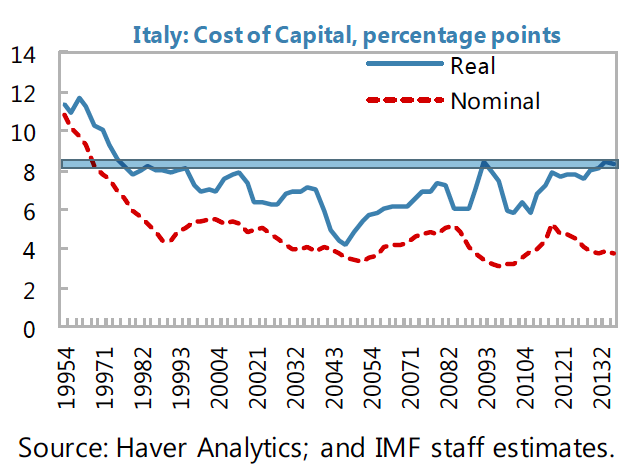 This means two things: firms are having difficulties funding replacement and expansion capital, technological modernisation stalled productivity across factors of production is going nowhere; and employment is unlikely to improve as cash flows are constrained by the need to sustain amortisation and depreciation in the environment of the high real cost of funding capital (which in part reflects also depressed margins).

Posted by TrueEconomics at 12:23 PM