Nothing can be as inspirational as real artistry and craftsmanship. And few examples of both stand head tall over the endless horizon of time than the works of Antonio Stradivari.

This week, Sotheby's announced that it is selling "what is regarded as the finest viola in existence – the "Macdonald" made by Antonio Stradivari in 1719." The 295-years old instrument is expected to go for more than £27m, "a figure that would easily surpass currently standing auction record for an instrument – the Lady Blunt Stradivari, which sold for £9.8m. It would (if achieved) also be higher than any known private sale." Per Sotheby's VC: "The instruments of the Stradivari are in a class of their own among the pinnacles of human craftsmanship and the Macdonald viola stands at the unquestioned summit."

Source: http://www.theguardian.com/uk-news/2014/mar/26/stradivarius-sothebys-macdonald?CMP=twt_fd Announcement: http://www.sothebys.com/content/sothebys/en/news-video/videos/2014/03/the-macdonald-viola-by-stradivari.html and you can read about the sale of Lady Blunt instrument here: http://www.newser.com/story/121578/stradivarius-violin-sells-for-16m.html 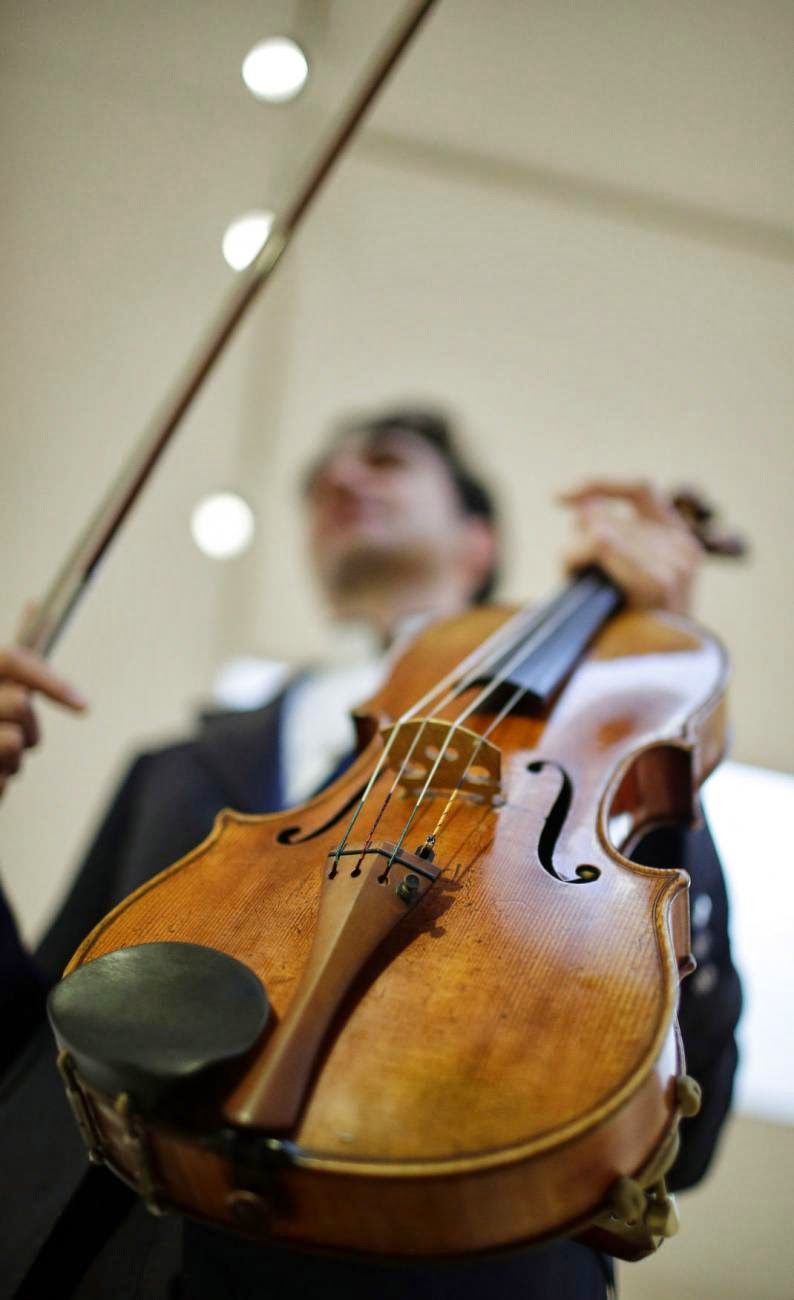 There is little doubt Antonio Stradivari (1644-1737) was the greatest maker of violins and violas of all times, having authored at least 1,116 instruments, although only around half still survive today.

There is a host of arguments attempting to capture the Stradivari's unique character. Here is an example:

"A Stradivarius in a good condition emits high-frequency sounds in a range where human hearing is the most sensitive. These frequencies become more audible in larger rooms. That makes the Stradivarius ideal for concerts in spacious concert halls and for performances together with big philharmonic orchestras.

The sound of these sublime instruments is so very characteristic that an observant listener can distinguish their superior tone when hearing the same artist playing on different instruments.

The sound of the old master instruments is not only superior in the vivacity of the tone; it is also insistent and captivatingly beautiful. The lustre and beauty of the instrument’s tone is as close you can come to the immaculate voice of a great opera diva." (Source: http://stradivariinvest.com/instruments/luthiers/)


But the magic, the allure, the raw emotional connection to Stradivari instruments - wether by public, critics or performers - also raises questions. The most pressing and the longest running one is: What makes Stradivari unique? And the less pressing, but probably more important one is: Is Stradivari unique?

Here is a note about one attempt to answer the first questions - a paper using the x-ray imagery to study the instruments: http://www.telegraph.co.uk/news/worldnews/europe/netherlands/2230123/Secret-of-Stradivarius-violins-superiority-uncovered.html

In contrast to physical qualities, some researchers have argued that chemical qualities to the wood used by Stradivari grant his instruments the power of uniqueness. Here is the paper looking into that aspect: http://www.scientificamerican.com/article/secrets-of-the-stradivari/ and http://www.sciencedaily.com/releases/2009/01/090122141228.htm

But there are doubts about both the existence and the source of Stradivari's violins performance compared to other outstanding works by contemporary and later craftsmen.

Here is an example of the scientific work performed by Colin Gough over the years that attempts to identify unique properties of Stradivari sound and fails to find them:
http://www.fritz-reuter.com/articles/physicsorg/Science%20and%20the%20Stradivarius%20(April%202000)%20-%20Physics%20World%20-%20PhysicsWeb.htm

And a more recent, brilliantly structured (albeit small sample and restricted spatial dimension) double-blind test study attempting to assess the ability of top violinists to discern the instrument they play: http://blogs.discovermagazine.com/notrocketscience/2012/01/02/violinists-cant-tell-the-difference-between-stradivarius-violins-and-new-ones/#.UzRD3a1_uzg

But may be the science of all of this is simply missing one core point: an artist is more than just a collection of physical properties - be they of her/his instrument or her/his own making. May be art is an intimate expression or at least a reflection of the soul (let me be old-fashioned here and surmise that soul exists without having to resort to attempting to explain what it might be). If so, then who cares if technically Stradivari's greatest achievement might have been in his instruments ability to trigger a (scientifically) placebo effect. The core result is the effect itself, as far as we are concerned with art. And that effect is undeniable. Virtuoso violinist Anne-Sophie Mutter likened playing her Strad for the first time to meeting her soul mate: "It sounded the way I (had) always been hoping," she said. "It's the oldest part of my body and my soul. The moment I am on stage, we are one, musically."

You might smile and say 'But studies show…' or you might marvel at her music and remember that is some intangible, non-scientific, quasi-religious way, it is a product of the Strad and thus a product of some guy who lived 300 years ago in a town called Cremona and had no computers, no state-granted labs, no complicated supply chains to procure and deliver rare varieties of wood, no precision equipment to mix his glues, lacquers, dyes and so on… and yet was able to give us something that no scientist to-date was able to explain...

Not bad. 300 years old… yet to be surpassed by anyone or anything, short of Stradivari's younger contemporary: Bartolomeo Giuseppe Guarneri del Gesù…  yet to be explained by anything or anyone... yet to be definitively established as anything beyond being sublime...
Posted by TrueEconomics at 10:35 PM

I think this is why Stewart Brand and his colleagues developed the idea of a 'Long Now Foundation'. Many of his collaborators worked at the very cutting edge of 20th century technology, and strangely as a result of that, it made them very much aware of the absence of an intelligent debate about the longer term, in the modern culture.

I always recommend something like Clay Shirky's talk to the Long Now Foundation, as an interesting place to start, in order to think about this. Enjoy.