CSO released QNA for Q4 2013 and I will be blogging at length on the core results, so stay tuned.

Here is the release link: http://cso.ie/en/releasesandpublications/er/na/quarterlynationalaccountsquarter42013/#.UyGWmfTV9bs

And the key highlights: 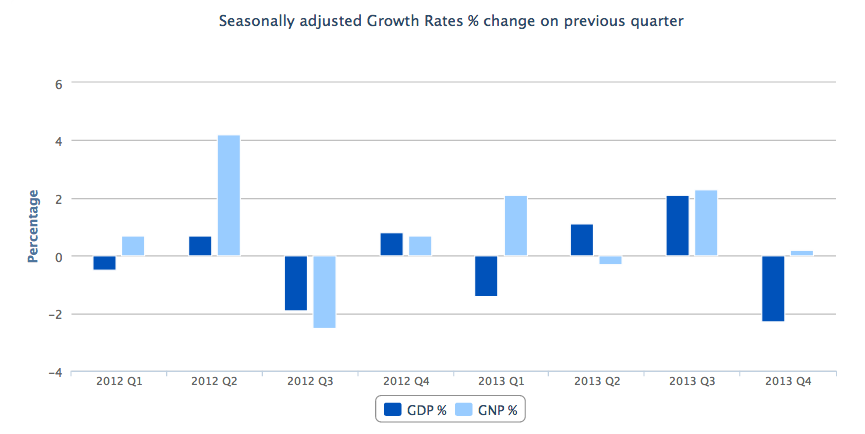 Since the official end of the Great Recession in Q1 2010, we had 9 quarters of rising GDP and 7 quarters of falling GDP.

As a result, constant market prices terms (2011 prices), GDP in Ireland now stands at EUR 162.303 billion, which is below 2011 and 2012 levels. Officially, there is no recession. Practically, GDP is shrinking.

Decomposing the above aggregate changes:

Taxes less subsidies rose to EUR15.223 billion in 2013 from EUR14.811 billion, contributing EUR412 million to 'growth'. Taxes are snow back to levels just below 2010 which should make our trade unionists rejoice, somewhat.

Looking at sectors of economy:

So here we go… recovery then… negative GDP growth (due to industry, distribution, transport, software and communications, and government activities shrinking, only partially offset by growth in other services, construction and agriculture, and rising taxes net of subsidies). Oh, and 25,000 new farmers adding on average ca EUR9,500 per person in annual output to the economy (remember - they are all gainfully employed, right?)...
Posted by TrueEconomics at 12:16 PM