This is an unedited version of my Sunday Times article from February 23, 2014.


Jobs, domestic investment, exports-led recovery and sustainable long-term growth are the four meme that have captured the current Coalition, setting the early corner stones for the next election’s promises. Resembling the ages-old "Whatever you like, we’ll have it" approach to policymaking, this strategy is dictated by the PR and politics first, and economics last. For a good reason: no matter how much we all would like to have hundreds of thousands new jobs based on solid global demand for goods and services we produce, given the current structure of the Irish economy, these fine objectives are largely unattainable and mutually contradictory.

Firstly, restoring jobs lost in the crisis requires restarting the domestic economy and investment both of which call for an entirely different use of resources than the ones needed to sustain exports-led growth. Secondly, domestic and externally trading economies are currently undergoing long-term consolidation. Expansion or growth will have to wait until these processes are completed. Thirdly, replacing lost jobs with new ones will not lead to a significant decrease in our unemployment. Majority of current unemployed lack skills necessary to fill positions that can be created in a sustainable economy of the future.

Torn between these conflicting calls on our resources, Irish economy is now at a risk of slipping into a ‘new normal’. This long-term re-arrangement of the economy can be best described as splitting the society into the stagnant debt-ridden domestic core and slowly growing external sectors increasingly captured by the aggressively tax optimising multinationals. Only a major effort at reforming our policymaking and tax regimes can hold the promise of escaping such a predicament.


In simple terms, Ireland's main problem is that we lack new long-term sources for growth.

Let's face the uncomfortable truth: apart from a historically brief period of economic catching up with the rest of the advanced economies, known as the Celtic Tiger from 1992 through 1999, our modern economic history is littered with pursuits of economic fads. In the 1980s the belief was that funding elections purchases via state borrowing delivers income growth. The late 1990s were the age of dot.com ‘entrepreneurship', and property and public 'investment'. From the end of the 1990s through today, correlation between real GDP per capita growth and the growth rates in inflation-adjusted real exports of goods collapsed, compared to the levels recorded in the period from 1960 through 1989. In the early 2000s dot.coms fad faded and domestic lending bubble filled the void. Since the onset of the 2010s, the new promise of salvation came in the form of yet another fad - ICT services.

Decades of growth based on tax arbitrage and the lack of sustained indigenous comparative advantage and expertise left our economy in a vulnerable position. Ireland today has strong notional productivity and competitiveness in a handful of high value-added sectors dominated by multinationals. As past experience shows, these activities can be volatile. As the recent data attests, they are also starting to show strains.

Last week, the Central Statistics Office published the preliminary data on merchandise trade for 2013. The results were far from pretty. Year on year, total value of Irish goods exports fell to EUR86.9 billion from EUR91.7 billion in 2012, and trade surplus in goods shrunk by EUR5.25 billion. Overall, 2013 was the worst year for Irish goods exports since the crisis-peak 2009.

This poor performance is due to two core drivers: the pharmaceuticals patent cliff and stagnant growth in exports across other sectors, namely in traditional and modern manufacturing.

The data clearly shows that we are struggling to find a viable replacement for pharmaceuticals sector. If in 2012, trade balance in chemicals and related products category accounted for 105 percent of our trade surplus, in 2013 this figure rose to over 106 percent. Just as our exports in this category are falling, our trade balance becomes more dependent on them.

The strategy is to replace traditional pharma activity with biopharma and other sectors that are more research-intensive than traditional pharma. Alas, our latest data on patenting activity shows that Ireland remains stuck in the pattern of low R&D output with declining indigenous patent filings. Institutionally, we have some distance to travel before we can become a world-class competitor in R&D and innovation. The latest Global Intellectual Property Index published this week, ranks Ireland 12th in the world in Intellectual Property environment. Beyond this lies the problem that much of the innovation-linked revenues booked by the MNCs into Ireland relate to activity outside of this country and are channeled out of Ireland with little actual economic activity imprint left here.

From the point of view of our indigenous workforce, it is critical that Irish indigenous exporters aggressively grow in new markets. Yet, Irish exports to BRICS economies and to Asia-Pacific have fallen in 2013. Our trade deficit with these countries has widened by 87 percent to EUR858 million last year.

So far, the short-term support for falling goods exports has been provided by relatively rapidly rising exports of services. This process, however, is also showing signs of stress. While we do not have figures for trade in services for 2013, the IMF most recent assessment of the Irish economy shows that our share of the world exports of services remains stagnant. And the IMF projects growth in Irish trade balance on services side to slow down significantly after 2015.


While exports engine is still running, albeit in a lower gear, domestic side of the economy remains comatose under the huge weight of our combined public and private debt overhang.  Total government and domestically-held private sectors debts stood at 189 percent of our GDP in 2007. At the end of 2013 it was 252 percent. This does not include debts held outside our official domestic banking system or loans extended to Irish companies abroad. The good news is the cost of funding this debt is relatively low. The bad news is – it will rise in the longer term.

And, in the long run, the wealth distribution in Ireland is skewed in favour of the older generations. This leaves more indebted working age households out in the cold when it comes to saving for future retirement and funding current investment in entrepreneurship and business development.

Irish economy is heading for a major split. Across the demographic divide the generation of current 30-45 year-olds will go on struggling to sustain debts accumulated during the period of the Celtic Tiger. They will continue facing high unemployment rates for those who used to work in the domestic economy. A stark choice for these workers will be either re-skilling for MNCs-dominated exports-focused services sectors, emigrating or facing permanently reduced incomes. Even those, likely to gain a foothold in the new ICT-led economy will have to stay alert hoping that the footloose sector does not generate significant jobs volatility.

All in, the unemployment rates in the economy are likely to remain stuck at the ‘new normal’ of around 8-8.5 percent through the beginning of the next decade, contrasting the 5 percent full employment rate of joblessness in the first decade of the century.


At this point in time, it is hard to see the sources of growth that can propel Ireland to the growth rates recorded over the two decades prior to the crisis. Back then, Irish real GDP per capita grew at an annualised rate of some 4.7 percent. The latest trends suggest that our income is likely to grow at around 1 percent per annum over 2010-2025 period - the rate of growth that has more in common with Belgium and below that expected for Germany. Aptly, the IMF puts our current output gap – the distance to full-employment level of economic activity – at around 1.2 percent of GDP, which ranks our growth potential as only thirteenth in the euro area. This clearly shows the shallow growth potential for this economy even in current conditions.

Slow recovery in employment and continued deleveraging of the households mean that Ireland will be staying just below the Euro area average in terms of income and consumption, and above the EU average in terms of unemployment. In that sense, the economic mismanagement of the naughties will be reversed by not one, but two or more lost decades.

Ireland has some serious potential in a handful of domestic sectors, namely food and drink, and agrifood, as well as in the areas where our ability to create and attract high quality human capital can offer future opportunities for growth. We have a handful of truly excellent, globally competitive enterprises, such as CRH, Ryanair and Glanbia. But beyond this, we are not a serious player in the high value-added game of modern economic production. In sectors where we allegedly have strong expertise: pharma, biotech, ICT, and finance, Ireland has no globally recognised large-scale indigenous players.

Ending the lost decades on a note of rebirth of the Celtic Tiger will take much more than setting political agendas for ‘kitchen sink’ growth agendas. It will take big-ticket reforms of the domestic economy, tax system, and political governance. Good news is that we can deliver such reforms. Bad news is that they are yet to be formulated by our leaders. 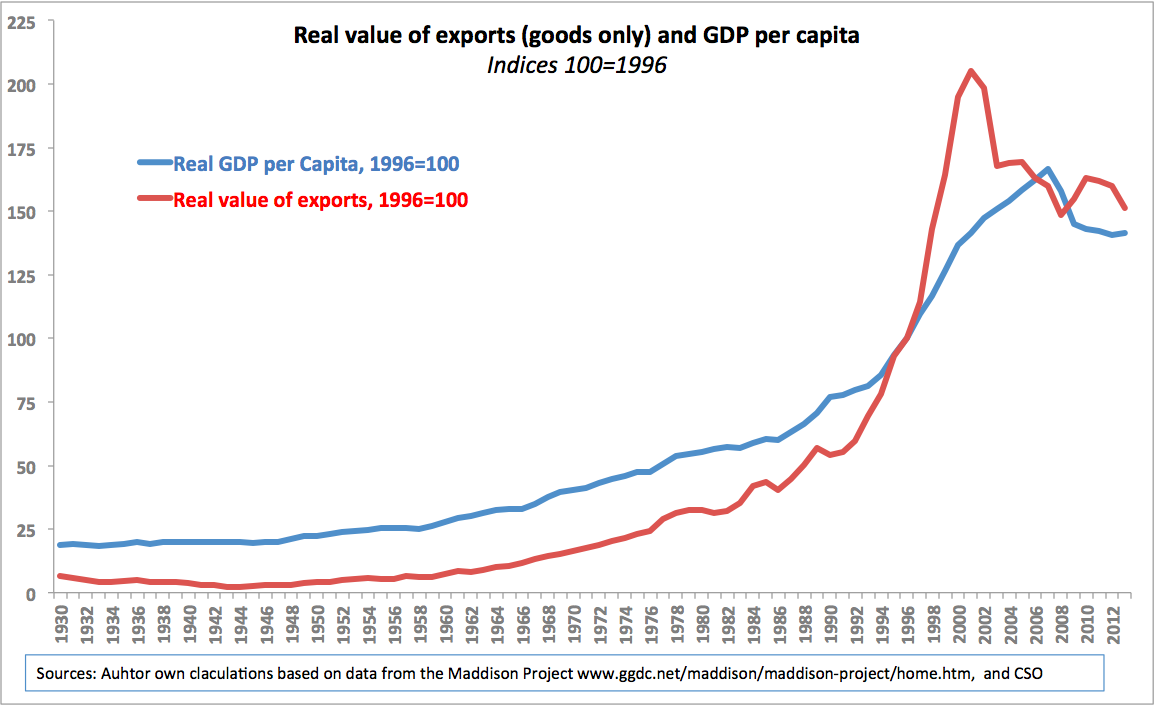 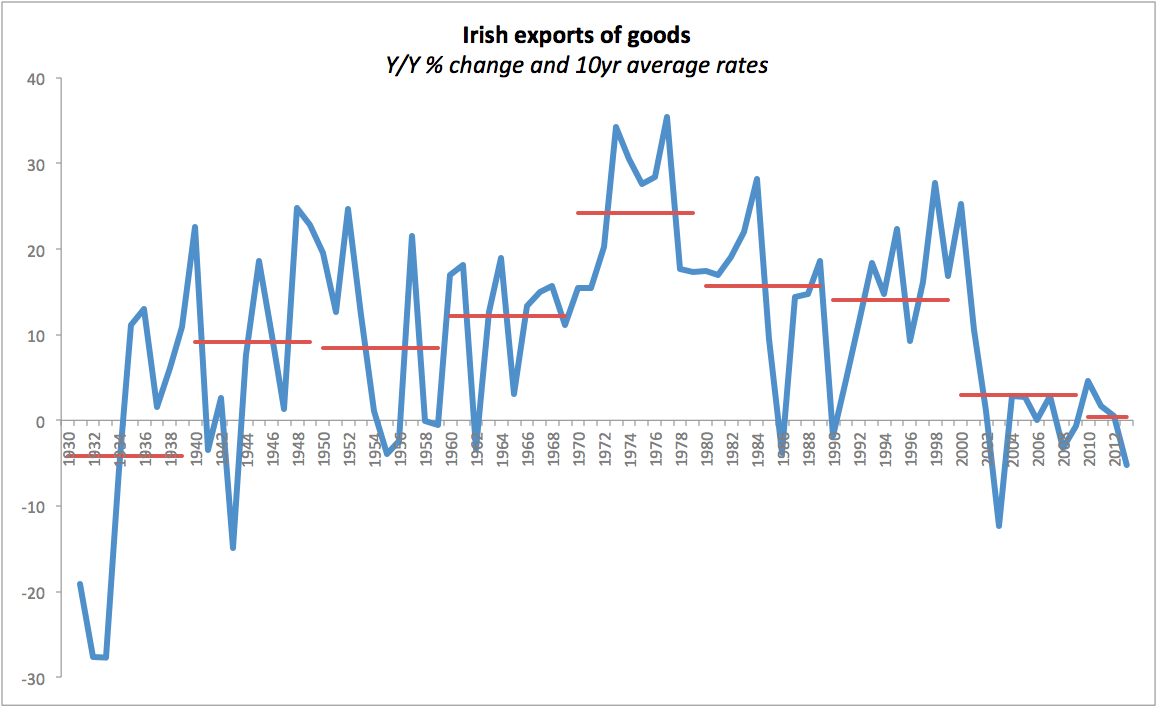 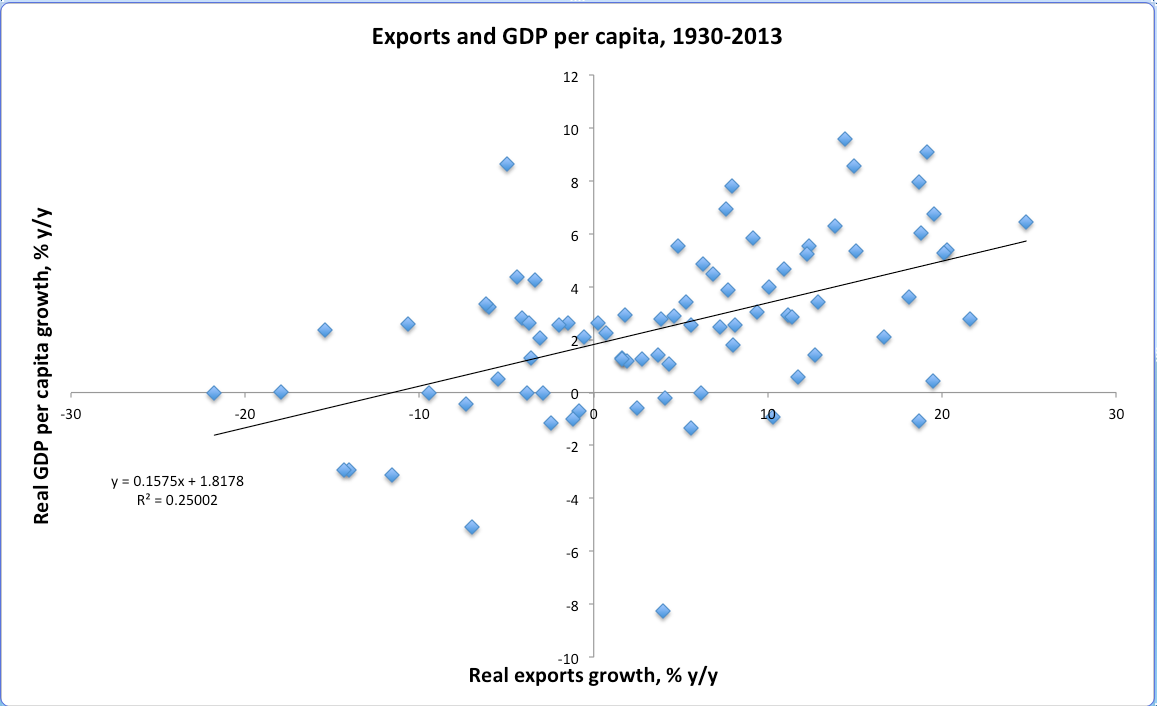 Recent research note from Kamakura Corporation provided yet more evidence of the damaging effects of the EU's knee-jerk reaction policies in the wake of the global financial crisis. Specifically, Kamakura study published last week focused on the July 2012-issued blanket ban on short selling in the European Credit Default Swaps (CDS) markets. CDS are de facto insurance contracts on sovereign bonds, actively used by professional and institutional investors for risk management and hedging. The study found that as the result of the EU ban, trading activity declined for eighteen out of 26 EU member states' CDS. Put in more simple terms, as the result of the EU decision, risk hedging in the sovereign debt markets for the majority of the EU member states' bonds was significantly undermined, leading to increased risk exposures for investors. At the same time, liquidity in the CDS markets fell, implying further shifting of risk onto investors in sovereign bonds. Kamakura analysis strongly suggests that investors holding sovereign debts of euro area ‘peripheral’ countries like Spain and Italy are currently forced to pay an excessive liquidity risk premium in CDS markets. At the same time, the EU regulators, having banned short selling can claim a Pyrrhic victory in public by asserting that they have reacted to the crisis by introducing tougher new regulations. In Europe, every political capital gain made has an associated financial, social or economic cost. This is true for economic decisions and financial markets regulations alike. Too bad that those who benefit from the former gains rarely face any of the latter costs.

Posted by TrueEconomics at 10:25 AM

Emigrating to Australia next week. I won't be buying any houses...