In previous post I have shown that IBF mortgages approvals data is primarily driven by the excessive volatility recorded at the end of 2012 - beginning of 2013, thus skewing the entire result for February 2014. The details here: http://trueeconomics.blogspot.ie/2014/03/2832014-irish-mortgages-approvals.html

However, we can also look at quarterly data and extend the series to cover periods before IBF data became available. Based on CSO's heavily lagging (the latest we have is Q3 2013) series for House Loans Approved and Paid and extending it with IBF data for Q4 2013, we have data on the issue of number of loans approved and their value from Q1 1975 through Q4 2013. We can also use January-February 2014 data from IBF to estimate Q1 2014 with relative accuracy.

Here are the results: 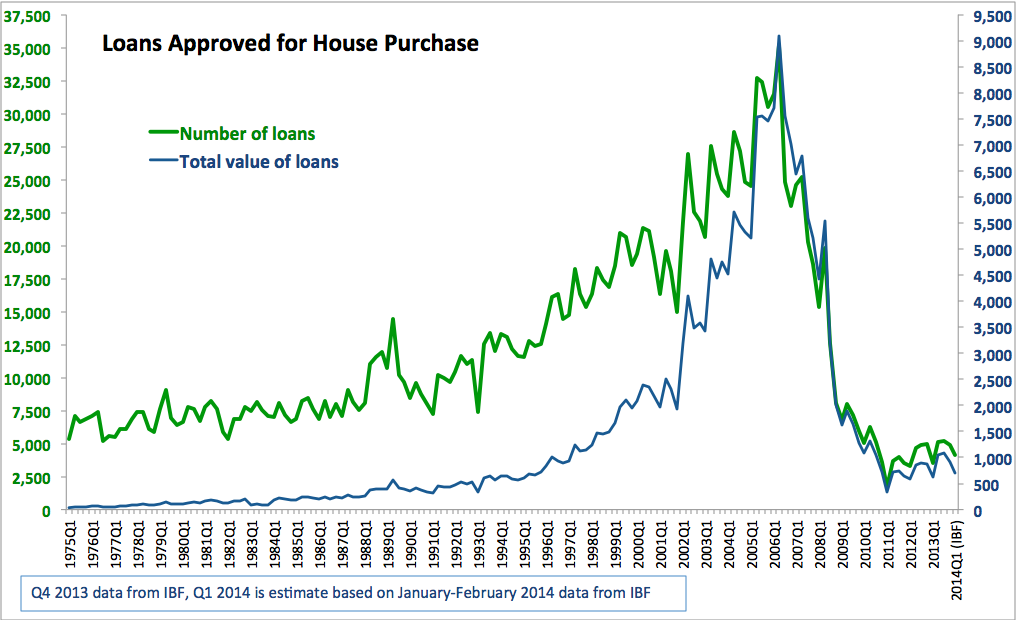 The argument is that January-February data and indeed data for the later part of 2013 shows improvement in the markets, and even recovery in the markets.

In the last 2 quarters, based on IBF data, there were around 4,510-4,530 house loans approved. This represents 8th lowest quarterly result for the entire history. This also represents lower levels of lending than in Q2 and Q3 2013. Prior to the onset of the crisis, there is not a single quarter on record when there were fewer new loans issued by numbers.

In terms of volumes of lending, without adjusting for inflation, things are only marginally better. Volume of lending over Q4 2013-Q1 2014 averaged at EUR809 million per quarter. This is comparable (but slightly lower) than levels of lending attained in Q4 1995-Q1 1996.

As you can see from the chart, you need to have pretty vivid imagination to spot any recovery in the above series.
Posted by TrueEconomics at 7:52 PM

I'm trying to reconcile the lack of lending recovery in this chart with the surge in house sale prices I'm observing (in South County Dublin). Two stories with somewhat different conclusions I can come up with are:

1. It is impressive that the house prices have been surging even without a lending uptick. When lending does resume to prior levels (even rates in the 1990s), the surge will strengthen considerably.

2. The surge in house prices must be mainly driven by cash buyers and not mortgage lending, which presumably is a finite pool of buyers. When that pool of buyers dries up, prices could drop significantly again.

Could others give their opinions about the dominance of 1 or 2 in the next few years, or other factors they see as relevant?