According to Reinhart and Rogoff recent (December 2013) paper "Financial and Sovereign Debt Crises: Some Lessons Learned and Those Forgotten" (by Carmen M. Reinhart and Kenneth S. Rogoff, IMF Working Paper WP/13/266, December 2013 http://www.imf.org/external/pubs/ft/wp/2013/wp13266.pdf) many economies in the advanced world will require defaults, as well as drastic measures of Financial Repression, including savings taxes and higher inflation as debt levels reach a 200-year high.

You can read the entire paper, so I am just going to summarise some core points, albeit at length.


R&R open up with a statement that is more of a warning against our complacency than a claim of our arrogance: "Even after one of the most severe crises on record (in its fifth year as of 2012) in the advanced world, the received wisdom in policy circles clings to the notion that advanced, wealthy economies are completely different animals from their emerging market counterparts. Until 2007–08, the presumption was that they were not nearly as vulnerable to financial crises. When events disabused the world of that notion, the idea still persisted that if a financial crisis does occur, advanced countries are much better at managing the aftermath..."

This worldview is also not holding, according to R&R: "Even as the recovery consistently proved to be far weaker than most forecasters were expecting, policymakers continued to underestimate the depth and duration of the downturn."

The focal point of this delusional thinking is Europe, "…where the financial crisis transformed into sovereign debt crises in several countries, the current phase of the denial cycle is marked by an official policy approach predicated on the assumption that normal growth can be restored through a mix of austerity, forbearance, and growth."

The point is that European (and other advanced economies' policymakers are deceiving the public (and themselves), believing that they "…do not need to apply the standard toolkit used by emerging markets, including debt restructurings, higher inflation, capital controls, and significant financial repression. Advanced countries do not resort to such gimmicks, policymakers say. To do so would be to give up hard-earned credibility, thereby destabilizing expectations and throwing the economy into a vicious circle."

Note: per R&R "“Financial repression” includes directed lending to government by captive domestic audiences (such as pension funds), explicit or implicit caps on interest rates, regulation of cross-border capital movements, and generally a tighter connection between government and banks. It often masks a subtle type of debt restructuring."

The warning that stems from the above is that "It is certainly true that policymakers need to manage public expectations. However, by consistently choosing instruments and calibrating responses based on overly optimistic medium-term scenarios, they risk ultimately losing credibility and destabilizing expectations rather than the reverse."

It is worth noting as a separate point in addition to the above issues that:

So the key lessons from the past are as follows.

Lesson 1: "On prevention versus crisis management. We have done better at the latter than the former. It is doubtful that this will change as memories of the crisis fade and financial market participants and their regulators become complacent." 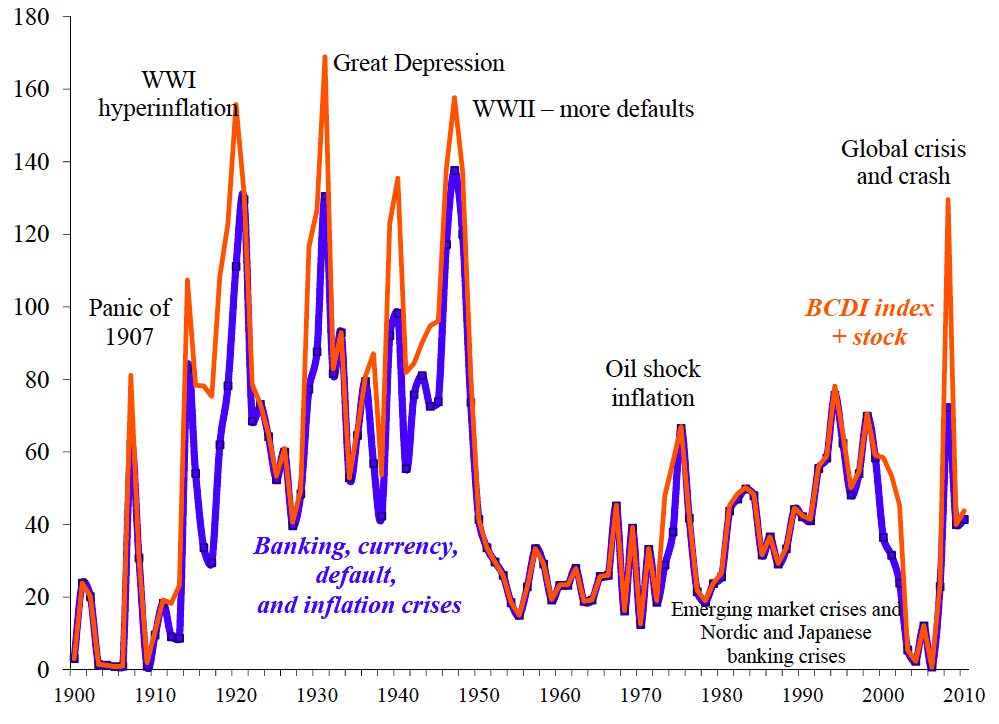 
Lesson 2: "On diagnosing and understanding the scope and depth of the risks and magnitudes of the debt. What is public and what is private? Domestic and external debt are not created equal. And debt is usually MUCH bigger than what meets the eye."

R&R are not shying away from the bold statements (in my view - completely warranted): "The magnitude of the overall debt problem facing advanced economies today is difficult to overstate. The mix of an aging society, an expanding social welfare state, and stagnant population growth would be difficult in the best of circumstances. This burden has been significantly compounded by huge increases in government debt in the wake of the crisis, illustrated in Figure 2. …As the figure illustrates, the emerging markets actually deleveraged in the decade before the financial crisis, whereas advanced economies hit a peak not seen since the end of World War II. In fact, going back to 1800, the current level of central government debt in advanced economies is approaching a two-century high-water mark." 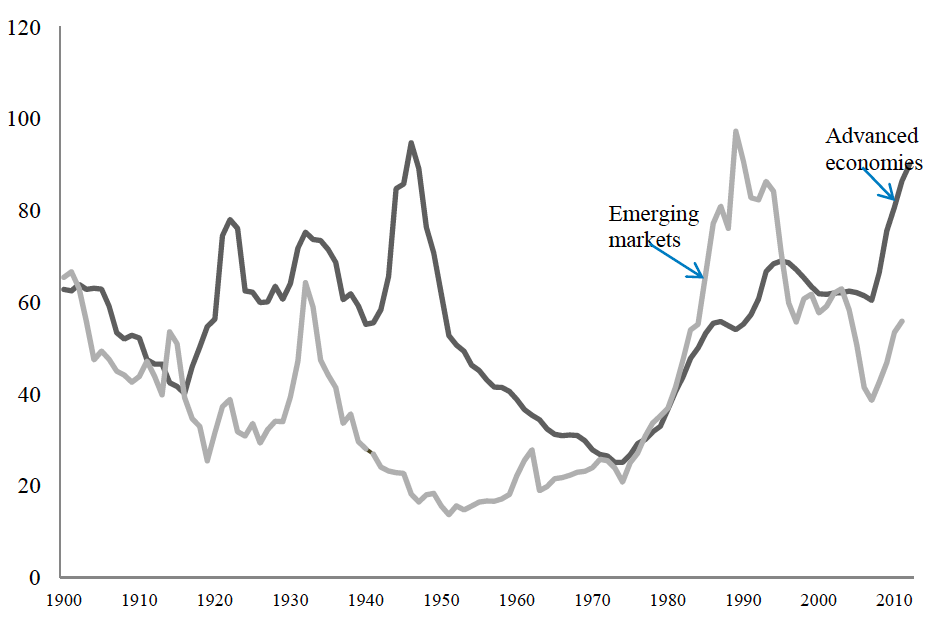 Things are even worse when it comes to external debt, as Figure 3 illustrates. 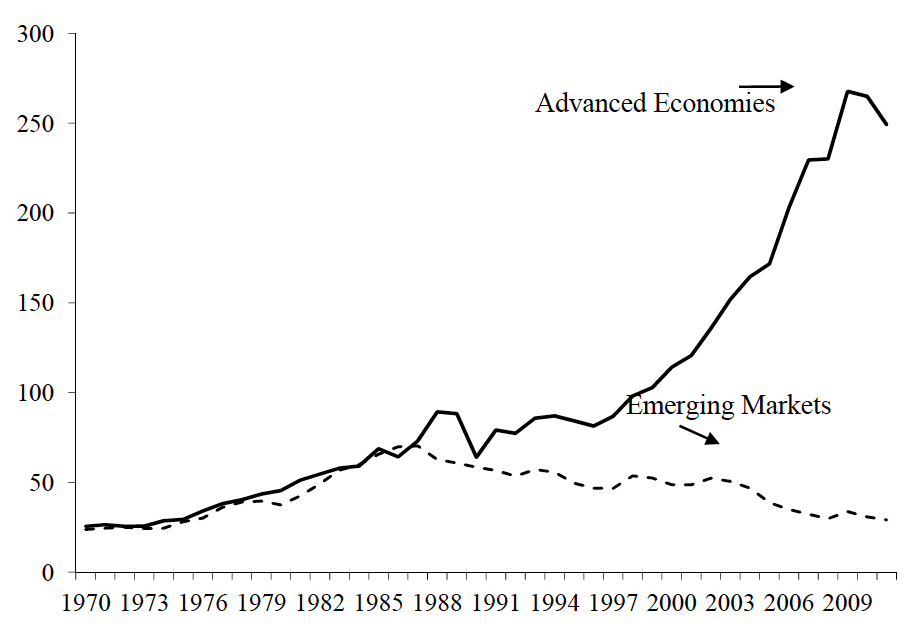 Note the 'exponential' trend on the chart above since the 1990s...

This is non-trivial (as per Figure 2 conclusions). "The distinction between external debt and domestic debt can be quite important. Domestic debt issued in domestic currency typically offers a far wider range of partial default options than does foreign currency–denominated external debt. Financial repression has already been mentioned; governments can stuff debt into local pension funds and insurance companies, forcing them through regulation to accept far lower rates of return than they might otherwise demand. But domestic debt can also be reduced through inflation."

And, as Figure 4 illustrates, public and external debts overhang are just the beginning of the troubles: "the explosion of private sector debt before the financial crisis. Unlike central government debt, for which the series are remarkably stationary over a two-century period, private sector debt shows a marked upward trend due to financial innovation and globalization, punctuated by volatility caused by periods of financial repression and financial liberalization." 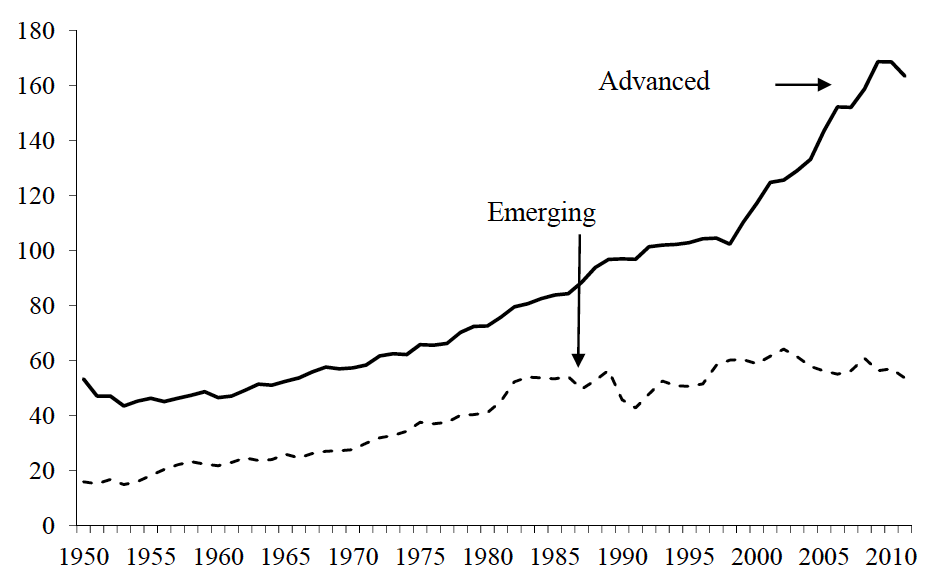 Lesson 3: "Crisis resolution. How different are advanced economies and emerging markets? Not as different as is widely believed."

R&R (2013) show "five ways to reduce large debt-to-GDP ratios (Box1). Most historical episodes have involved some combination of these."

As R&R note, "the first on the list is relatively rare and the rest are difficult and unpopular." But more ominously, "recent policy discussion has tended to forget options (3) and (5), arguing that advanced countries do not behave that way. In fact, option (5) was used extensively by advanced countries to deal with post–World War II debt (Reinhart and Sbrancia, 2011) and option (3) was common enough before World War II."

Beyond the fact that the two measures have precedent in modern history of the advanced economies, there is also the issue of the current crisis being of greater magnitude than previous ones.

"Given the magnitude of today’s debt and the likelihood of a sustained period of sub-par average growth, it is doubtful that fiscal austerity will be sufficient, even combined with financial repression. Rather, the size of the problem suggests that restructurings will be needed, particularly, for example, in the periphery of Europe, far beyond anything discussed in public to this point. Of course, mutualization of euro country debt effectively uses northern country taxpayer resources to bail out the periphery and reduces the need for restructuring. But the size of the overall problem is such that mutualization could potentially result in continuing slow growth or even recession in the core countries, magnifying their own already challenging sustainability problems for debt and old age benefit programs."


The authors conclude that "…if policymakers are fortunate, economic growth will provide a soft exit, reducing or eliminating the need for painful restructuring, repression, or inflation. But the evidence on debt overhangs is not heartening. Looking just at the public debt overhang, and not
taking into account old-age support programs, the picture is not encouraging. Reinhart, Reinhart, and Rogoff (2012) consider 26 episodes in which advanced country debt exceeded 90 percent of GDP, encompassing most or all of the episodes since World War II. (They tabulate the small number of cases in which the debt overhang lasted less than five years, but do not include these in their overhang calculations.) They find that debt overhang episodes averaged 1.2 percent lower growth than individual country averages for non-overhang periods. Moreover, the average duration of the overhang episodes is 23 years. Of course, there are many other factors that determine longer-term GDP growth, including especially the rate of productivity growth. But given that official public debt is only one piece of the larger debt overhang issue, it is clear that governments should be careful in their assumption that growth alone will be able to end the crisis. Instead, today’s advanced country governments may have to look increasingly to the approaches that have long been associated with emerging markets, and that advanced countries themselves once practiced not so long ago."


What R&R are showing in their paper is that Financial Repression already underway is hardly inconsistent with the potential for further restructuring and repression. They also show that the current crisis is still unresolved and ongoing and that the current de-acceleration in crisis dynamics is not necessarily a sign of sustained recovery: things are much longer term than 1-2 years of growth can correct for. In the mean time, as we know, the EU continues on the path of shifting more and more future crisis liabilities onto the shoulders of savers and investors, while offloading more and more public debt overhang costs onto the shoulders of taxpayers. All along, the media and our politicians keep talking down the risks of future bailouts, bail-ins and structural pain (lower growth rates, higher interest rates, higher rates of private insolvencies).


Note: You can read more on the rather lively debate about the effects of debt on growth by searching this blog for "Reinhart & Rogoff" Some of the links are here:

Posted by TrueEconomics at 8:14 PM