Much talk about sanctions, punishment and pain for Russia... and one of the cornerstones of these is the idea of 'isolating' the Kremlin. Step one in this direction was the 'suspension' or 'temporary suspension' of Russia's membership in G7+1=G8 group of countries that represent, allegedly, the largest and most powerful states/economies in the world.

Except they do not do such a thing. Today. And they will not do so in the near future either.

Here are two charts, plotting, in current US dollars, GDP of the top 20 nations. Black bars represent countries that are 'permanent' members of G7. 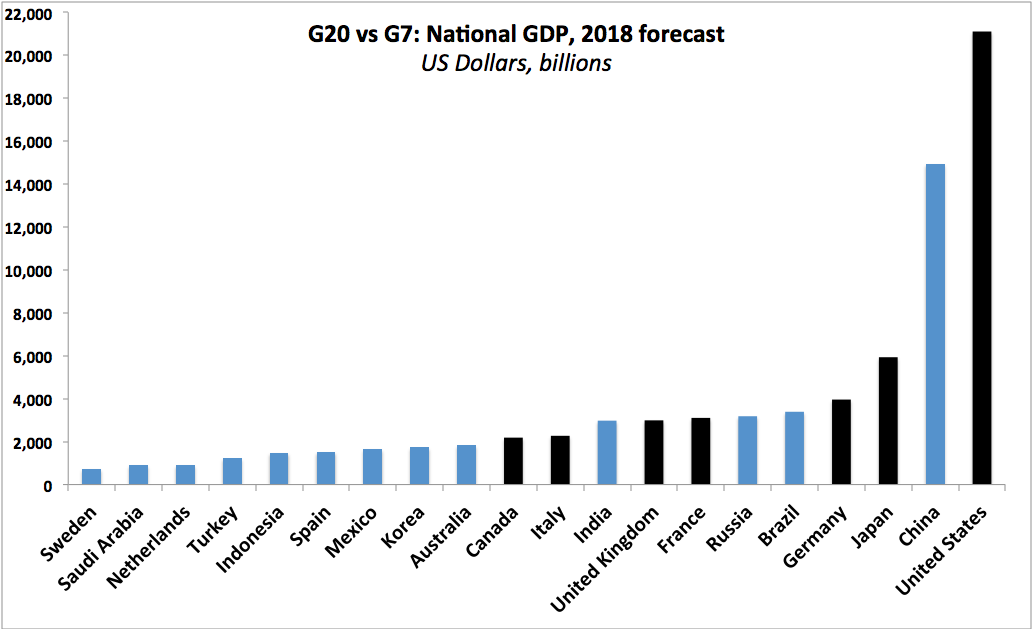 And so in very near (in economic and geopolitical terms) future, 3 of the current G7 members will not be qualifying for G7 membership based on economy size, and Canada won't make it into G10.

Instead, of course, the G10 (no, we do not need G7) should include today India, Brazil, Russia and China. If you are to make a club that stands for anything other than being the economic Gerontology Central, you do need to extend it to those countries that matter.

Alternatively, we can look at top 20 as a set of several distinct groupings:


Though all of this is still pretty arbitrary and subject to adverse shocks and more glacial trends...

One way or the other, kicking Russia out of G8 makes about as much sense as keeping Canada and Italy in G7. G8 is not a club where they drink fancy aperitifs and discuss latest Sotheby's sale. It is a club where the largest nations deal with real issues (allegedly), so China, Russia, Brazil should be in, and Canada and Italy should be out.
Posted by TrueEconomics at 3:51 PM