IMF announced the agreement to provide USD14-18 billion in Stand-by Arrangement with Ukraine.

This is a 'troika'-like arrangement:

“Ukraine’s macroeconomic imbalances became unsustainable over the past year. The (until recently) pegged and overvalued exchange rate drove the current account deficit to over 9 percent of GDP, and a lack of competitiveness led to the stagnation of exports and GDP. With significant external payments and limited access to international debt markets, international reserves fell to a critically low level of two month of import in early 2014. The 2013 fiscal deficit was 4½ percent of GDP, and the government accumulated sizeable expenditure arrears. The 2013 deficit of the state-owned gas company Naftogaz reached nearly 2 percent of GDP, driven by the sharp increase in sales at below-cost prices. Without policy action, the combined budget/Naftogaz deficit would widen to over 10 percent of GDP in 2014."

So in other words, 2013 combined deficit was around 6.5% of GDP, but 2014 deficit - following 'some stabilisation' (see below) is to reach 10% of GDP. I wonder why?.. Is it down to expected price increases on gas and oil? Or is it down to the havoc wrecked by Maidan protesters? It is certainly not down to the Crimean crisis, since removal of Crimea off Kiev's books should save the Ukrainian Government money.


“Following the intense economic and political turbulence of recent months, Ukraine has achieved some stability, but faces difficult challenges. To safeguard reserves and address currency overvaluation, the National Bank of Ukraine (NBU) floated the exchange rate in February. Measures implemented in February and March helped stabilize financial markets and ensured that critical budget payments have been met. Nonetheless, the economic outlook remains difficult, with the economy falling back into recession. With no current market access, large foreign debt repayments loom in 2014-15."

Now, key question here is why is Government deficit rising if currency is being devalued? Especially as official debt levels in the Ukraine are relatively low? Is it because Ukraine running huge current account deficit (even with subsidised prices for Russian gas)?


"Monetary policy will target domestic price stability while maintaining a flexible exchange rate. This will help eliminate external imbalances, improve competitiveness, support exports and growth, and facilitate the gradual rebuilding of international reserves.  The NBU plans to introduce an inflation targeting framework over the next twelve months to firmly anchor inflation expectations."

This is pure nonsense. Devaluation is bound to drive inflation up. Rebuilding economy will require lower interest rates, which will further support high inflation. What on earth can NBU do to set price stability as its objective? Dollarise the economy? Tried and failed in the form of pegs, and given the role of Maidan (populist movement) how can vast amount of pain be inflicted on the economy to drive price inflation to reasonable bounds?


"Financial sector reforms will focus on: (i) ensuring that banks are sound, liquid, and well-capitalized; (ii)  upgrading the regulatory and supervisory framework of the NBU, including complying with international best practice and supervision on a consolidated basis,  and (iii) facilitating resolution of non-performing loans in the banking sector."

The above reads like a Cyprus-Greece scenario. Good luck finding Russian oligarchs to hit with a deposit tax.


"The initial stabilization in 2014 will be achieved through a mix of revenue and expenditure measures. For 2015-16, the program envisions a gradual expenditure-led fiscal adjustment—proceeding at a pace commensurate with the speed of economic recovery and protecting the vulnerable—aiming to reduce the fiscal deficit to around 2½ percent of GDP by 2016."

Yes, I know… it is… austerity. Higher taxes, lower spending, followed by lofty lower spending and lower spending. I think we shall recall that the current Government has been installed into place by the populist uprising.


"A key step is the commitment to step by step energy reform to move retail gas and heating tariffs to full cost recovery, along with early action towards that goal."

Read: 40% hike in domestic gas prices is only the beginning.


In conclusion, IMF release focuses on real issues - institutional deficits in terms of governance, corruption, procurement, transparency. All are laudable and much needed.

Let's wait for more details on the above points. 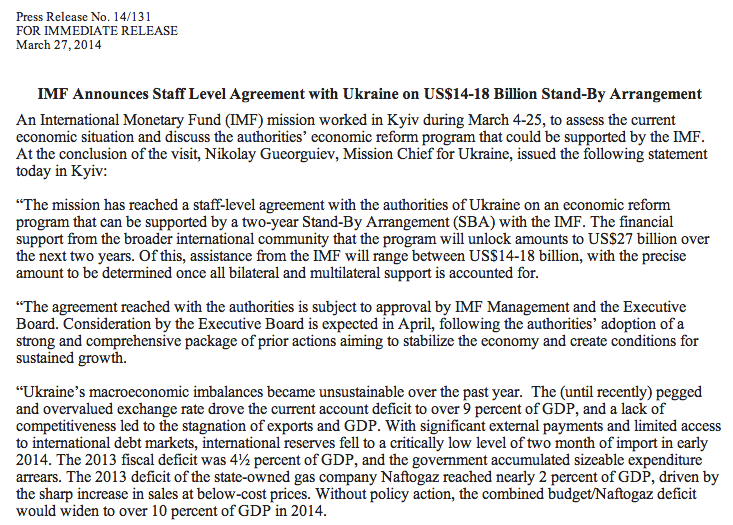 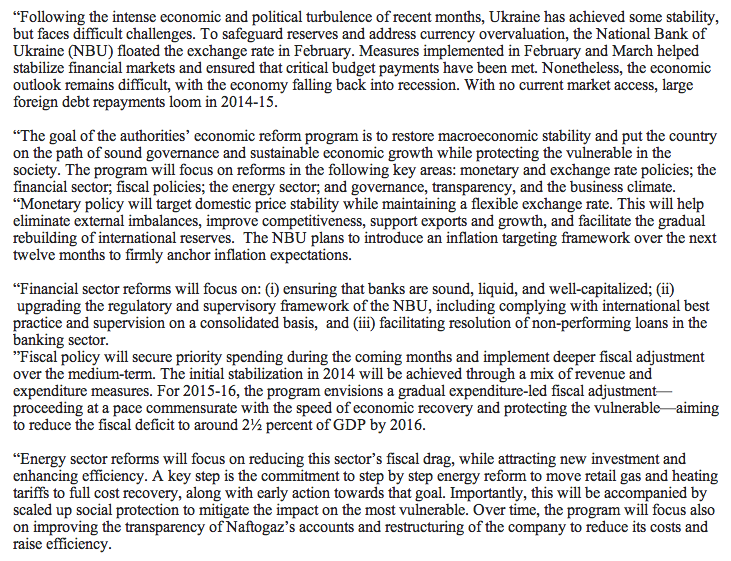 Posted by TrueEconomics at 12:14 PM

Looks like you're not wrong about inflation - the WSJ just said it's up more than 10 per cent since the start of the year (during which time the currency's depreciated about 30%)....