This is an unedited version of my Sunday Times column from May 26, 2013

Over recent months, one side of the Irish economy – the side of aggressive tax optimization and avoidance by the Ireland-based multinational corporations – has provided a steady news-flow across the global and even domestic media. While important in its own right, the debate as to whether Ireland is a corporate tax haven de facto or de jure is missing a major point. That point is the complete and total disconnection between Ireland’s two economies: economy we all inhabit in our daily lives and economy that exists on paper, servers and in the IT clouds. The latter has a mostly intangible connection to our everyday reality, but is a key driver of Ireland’s macroeconomic performance and the Government PR machine.

Take a look at two simple sets of facts.

According to our national accounts, Ireland’s economy, measured in terms of GDP per capita, has been growing for two consecutive years expressed in both nominal terms and inflation-adjusted terms. Real GDP per capita in Ireland grew over 2010-2012 period by a cumulative 2.38% according to the IMF. Accounting for differences across the countries in price levels and exchange rates (using what economists refer to as purchasing power parity adjustment), Ireland’s GDP per capita has risen 5.7% over the two years through the end of 2012. Over the same period of time, Ireland’s GNP per capita, controlling for exchange rates and prices differentials, has grown by 3.3%.

Sounds like the party is rolling back into town? Not so fast. The aggregate figures above provide only a partial view of what is happening at the households’ level in the Irish economy. Stripping out most of the transfer pricing activity by the multinationals, domestic economy in Ireland is down, not up, by 5.2% between 2010 and 2012, once we adjust for inflation and it is down 2.7% when we take nominal values. With net emigration claiming around six percent of our population, per capita private domestic economic activity has fallen 4.2% over the last two years.

All in, Irish domestic economy is the second worst performer in the group of all peripheral euro area states, plus Iceland. Sixth year into the crisis, we are now in worse shape than Argentina was at the same junction of its 1998-2004 crisis.


What the above numbers indicate is that the Irish domestic economy, taken at the household level, has been experiencing two simultaneous pressures.

While aggregate inflation across the economy has been relatively benign, stripping out the effects of the interest rates reduction on the cost of housing, Irish households are facing significant price pressures in a number of sectors, reducing their real household incomes just at the time when the Government is increasing direct and indirect tax burdens. At the same time, rampant unemployment and underemployment have been responsible for lifting precautionary savings amongst the households with any surplus disposable income. By broader unemployment metrics that include unemployed, officially underemployed, and state-training programmes participants, Irish unemployment is currently running at 28% of the potential labour force. Adding in those who emigrated from Ireland since 2008 pushes the above broad measure of unemployment to close to 33%.

Lastly, the households are facing tremendous pressures to deleverage out of debt, pressures exacerbated by the Government-supported efforts of the banks to increase rates of recovery on stressed mortgages.

In this environment, real disposable incomes of households net of tax and housing costs are continuing to fall despite the increases recorded in GDP and GNP. The Irish Government, so keen on promoting our improved cost competitiveness when it comes to the foreign investors is presiding over the ever-escalating costs of living at home.

In 2012 consumer prices excluding mortgages interest costs stood the highest level in history and 1.2% ahead of pre-crisis peak of inflation recorded in 2008. Much of this is accounted for by the heavily taxed and regulated energy prices.

Sectoral data reveals the story of rampant annual inflation in state-controlled parts of the economy. Of ten broader categories of goods and services, ex-housing, reported by CSO, all but one private sectors posted virtually no inflation over 2012 compared to the average levels of prices in 2006-2008 period. Food and non-alcoholic beverages prices declined 1.4%, clothing and footware prices are now a quarter lower, costs of furnishings, household equipment and routine household maintenance are down 13%, and recreation and culture services charges are down more than 2.7%. Restaurants and hotels costs are statistically-speaking flat with price increases of just 0.4% on 2006-2008 average. The only private sector that did post statistically significant levels of inflation was communications where prices rose 3.5% by the end of 2012 compared to pre-crisis average. But even here postal services charges lead overall inflationary pressures.

In contrast, every state-controlled and heavily taxed sub-sector is posting rampant inflation. Alcoholic beverages and tobacco prices are up 12.3%, health up 13.4%, transport up 11.4%, and education costs are up 30.4%. Energy costs are up 32.5% and utilities and local charges are up 14.9%. While energy costs rose virtually in line with increases in global energy price indices, the state still reaped a windfall gain from this inflation via higher tax revenues, and higher returns to state-owned dominant energy market companies: ESB, Bord Gais and Bord na Mona.

The state extraction of funds through controlled charges and taxation linked to these charges is rampant. Over 2009-2012 period, indirect taxes, state revenues from sales of services and investment income – all linked to the cost base in the underlying economy rose from EUR 24.8 billion in 2009 (44.3% of total state revenues) to EUR 25.2 billion in 2012 (44.5% of total state revenues). This was despite significant declines in imports and consumption of goods in the domestic economy and declines in government own consumption of goods from EUR 10.4 billion in 2009 to EUR 8.56 billion in 2012. For those who think this extraction is nearly over now, let me remind you that IMF forecast increases in Government revenues for Ireland over 2014-2018 are set to exceed revenues increases passed in all budgets since 2008.


The price and tax hikes on Irish households leave them exposed to the risk of future increases in mortgages costs. Government controlled prices are sticky to the downside, which means that the once prices are raised, the state regulators and policymakers are unwilling to adjust prices downward in the future, no matter how bad households budgets can get. The reason for this is that semi-state companies reliant on regulated charges have significant market and political powers, especially as they act as prime vehicles for big bang ‘jobs creation’ and ‘investment’ announcements that fuel Irish political fortunes. At the same time, the state uses revenues obtained directly via dividends payouts and indirectly via taxes on goods and services supplied by the semi-state companies as substitutes for direct taxation. Absent deflation in state-controlled sectors, there is very little room left in the private sectors to compensate households for any potential future hikes in mortgages by reducing costs of goods and services elsewhere.

And mortgages costs are bound to rise over time. In 2008, new mortgages interest rates averaged around 5.2% against the ECB repo rate average of 3.85%, implying a lending margin of around 135 basis points. Since January 2013, ECB rates have averaged 0.7% while Irish mortgages rates averaged around 3.4%, implying a margin of 270 basis points. At this stage, we can expect ECB rates to revert to their historical average of around 3.1% in the medium-term future. At the same time, according to the Troika, Government and Central Bank’s plans, Irish banks will have to increase their lending margins. Put simply, current average new mortgages rates of 3.4% can pretty quickly double. Ditto for existent mortgages rates.


The dual structure of the Irish economy, splitting the country into an MNCs-dominated competitiveness haven and domestic overpriced and overtaxed nightmare, is going to hit Ireland hard in years to come. The only solution to the incoming crisis of rampant state-fuelled inflation in the cost of living compounding the households insolvency already present on the foot of the debt crisis is to reform our domestic economy. However, the necessary reforms must be concentrated in the areas dominated by the state-owned enterprises and quangos. These reforms will also threaten the state revenue extraction racket that is milking Irish consumers for every last penny they got. With this in mind, it is hardly surprising that to-date, six years into the crisis, Irish governments have done nothing to transform state-sponsored unproductive sectors of the domestic economy into consumers-serving competitively priced ones. 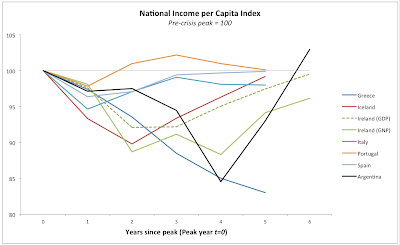 Remember Ireland’s ‘exports-led recovery’ fairytale? The premise that an economy can grow out of its banking, debt and growth crises by expanding its exports has been firmly debunked by years of rapid growth in exports of goods and services, widening current account surpluses and lack of real growth in the underlying economy. Recent data, however, shows that the thesis of ‘exports-led recovery’ for the euro area is as dodgy as it is for Ireland. In 2010-2012, gross exports out of the euro area expanded by a massive 21.4%. Over the same period GDP grew by only 2.8%. Stripping out positive contributions from the private economy side (Government and household consumption, plus domestic investment), net exports growth effectively had no impact on shallow GDP expansion recorded in 2010 and 2011. The latest euro area economy forecasts for 2013 across 21 major research and financial services firms and five international economic and monetary policy organizations show a 100% consensus that while exports out of the euro area will continue to post positive growth this year, the euro area recession will continue on foot of contracting private domestic consumption and investment. Median consensus forecast is now for the euro area GDP to fall 0.4% in 2013 on foot of 2.1% drop in investment, 0.8% contraction in private consumption and a relatively benign 0.3% decline in Government consumption. The same picture – of near zero effect of exports on expected growth – is replayed in 2014 forecasts, with expectations for investment followed by private consumption expansion being the core drivers for the euro area return to positive GDP growth of ca 1.0%. Sadly, no one in Europe’s corridors of power seem to have any idea on how to move from fairytale policies pronouncements to real pro-growth ideas.