When one is bored, truly deeply bored, it is hard to muster much strength to go through the twists and turns of the data. And I am bored, folks. Irish property prices data, released by CSO today, is simply equivalent to watching a fish flopping on hot asphalt - it is simply, clearly, obviously, patently... not going anywhere.

That is the story with the stats from Ireland nowadays - the flatline economy, punctuated by the occasional convulsion up or down.

Alas, to stay current we simply have to go through the numbers, don't we?

Let's first do a chart. Annual series for 2012 are finalised and were revised slightly down on the aggregate index compared to the previous release: 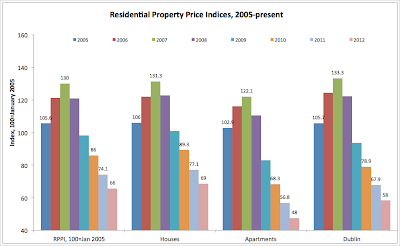 The chart clearly shows that despite all the talk about 'bottoming out' house prices, and 'buyers throwing deposits on unfinished homes' is a quasi-2006 frenzy, property prices in Ireland fell over the full year 2012.

Recall the prediction by some economists that property prices are likely to stabilise around -60% mark on peak? I made similar claim, but referencing in the medium term Dublin and larger urban areas, while stating that nationwide prices will be slower to react due to rural and smaller towns' property markets being effectively inactive. Guess what? Dublin prices were down 56.3% on peak in 2012. Not exactly that badly off the mark. Apartments prices - down 61.1% on peak. Exceeding the mark. Nationwide, properties were down 49.5% on peak, still some room to go, but in my view, we are still heading in the direction of 60% decline.


Dublin:
Instead of boring you with the discussion of detailed stats on dynamics, here are the main charts: 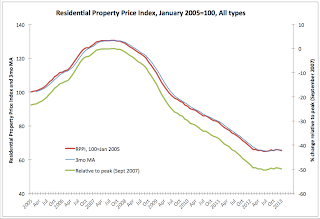 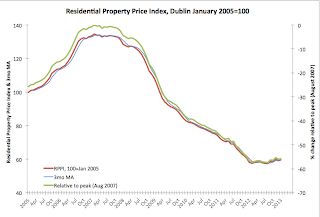 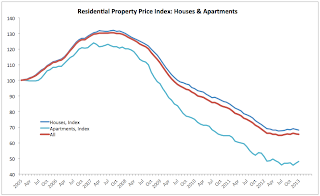 All of the above show basic reality of an L-shaped 'recovery' we have been having to-date. May be, one might hope or one might dread, the prices will move up from here in a more robust fashion. Reality is - so far, they are not... When that reality changes, I will let you know.

Posted by TrueEconomics at 11:03 PM

good intro. only the bank i see ulster bank are opening new one for lending morgages in kk. city town pity the market is still on shakey ground 5 mill. to go to nama the mabs charge nothing but the joe bloggs will pay higher interest rates next months and years on broken homes budjets and try feed the poor child(S)mouth for generations still the ecb imf and bankers price of shares rise and we stare at the sky from the gutter keep up good work constant and save the poor ?