Released today, the Ifo Business Climate Index for German industry and trade "rose significantly by over three points in February. This represents its greatest increase since July 2010. Satisfaction with the current business situation continued to grow. Survey participants also expressed greater optimism about their future business perspectives. The German economy is regaining momentum."

These are positive news for the German economy and it needed some cheer up. But, alas, good news, like every proverbial silver lining, do come with small clouds attached. Since I am not in the business of spinning the same story as everyone else, I will focus on some of these clouds in the note. You can read the actual press release and see data here: http://www.cesifo-group.de/ifoHome/facts/Survey-Results/Business-Climate/Geschaeftsklima-Archiv/2013/Geschaeftsklima-20130222.html

Good stuff: "In manufacturing the business climate indicator rose sharply. This was specifically due to a considerably more optimistic business outlook. Manufacturers also expressed greater satisfaction with their current business situation. Export expectations increased and are now above their long-term average once again."

Truth be told, in the industrial sectors, the entire rise in the index can be explained by the above two sectors, with wholesale and retail sectors staying at and below the zero mark (respectively). Internal economy seems to be still in poor shape, although the rate of decline clearly dropped in wholesale sector, whilst accelerating in the retail sector.

In services, business climate also rose impressively, but the entire increase was due to business expectations, while the current situation assessment deteriorated.

What worries me more is the headline indices for all sectors.

The latter point is problematic. You see, expectations surveys of businesses are often more indicative of the direction, rather than of the magnitude, of future changes. And so is the case with the Ifo index. 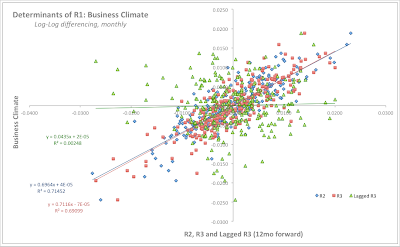 Per chart above, whilst current conditions are strongly correlated with the business climate in the same period, it turns out that future expectations are much more strongly linked with current climate (and conditions) than with what they are supposed to predict - namely, future conditions. In fact, the same result holds regardless of whether we choose a forward lag on expectations 6mo out or 12mo out. There is simply no connection between m/m changes in reported expectations and the future business climate realisations.

So, while we sound victory trumpets around the headline 'strong rise' in the Ifo index, we should be aware of the fact that most of this rise is indeed being driven by highly suspect expectations.

But wait, things are even worse than that. Take a look at historical volatility in indices. Based on two standard deviations metrics (sample and population), m/m changes in sub-indices post historical standard deviations of 1.4 for Business Climate, 1.7-1.8 for Business Conditions and 1.7 for Expectations. Which, basically, means that 3% rise in headline index was basically statistically indifferent from zero change, and likewise was 1.9% rise in Business Conditions index. Only the 4.0% hike in Business Expectations was possibly statistically significant.

So here wi have it - the most questionable in quality indicator was the most influential driver of the February gains and was also the most likely candidate for being statistically distinct from zero in terms of its m/m expansion.

Posted by TrueEconomics at 2:01 PM