In previous two posts, I have covered the broader trends for R&D spending in Ireland over 2007-2012 and more specific trends in terms of R&D-related employment. In this, last, post I will illustrate some trends in relation to R&D spend and activity by nationality of the firm ownership. 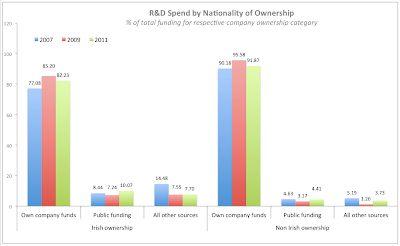 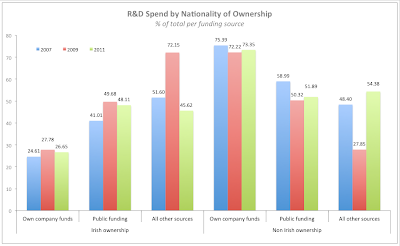 The charts above clearly show that for indigenous firms (Irish-owned):

Table below summarises the data:

I guess the main lesson here is that we need to more aggressively stimulate the use of 'other' sources of funding for the Irish-owned enterprises. I have been speaking about the need for enhancing Ireland's tax system to increase use of employee equity shares as a major tool for raising funding for indigenous firms, especially medium-sized ones (see presentation here).
Posted by TrueEconomics at 10:12 PM