The latest data from Services PMIs - released this am - is full of positive news. In this light, it is both hard and, perhaps, unjust to rain on the parade with detailed analysis of hypotheticals. But, alas, this is what needed for the dose of reality check.

Before we do, here are the straight forward numbers.

Overall headline Business Activity index rose to 56.8 in January 2013 from seasonally adjusted 55.8 in December 2012 - a strong level of activity that marks the highest index reading for any month since August 2007 when the index reached 57.0.

This is the good bit. And it gets even better when we consider 3mo MA to smooth out some of the monthly index volatility: current 3mo MA stands at 56.2, ahead of previous 3mo MA through October 2012 of 53.9. Year ago, 3mo MA was at contractionary 49.8 and in 2011 the same period 3mo MA was at 50.7 against 2010 3mo MA through January reading 46.5. In other words, we have solid increase in 3mo MA, which is more sustainable reading than monthly series. 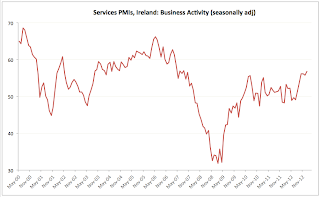 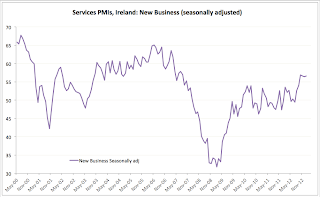 Per chart above, Business Activity expansion was backed by New Business Index growth. New Business Index reading reached 56.6 in January, up on already strong reading of 56.4 in December. However, unlike overall activity, new business expansion was not as dramatic in historic terms, with January marking third fastest rate of expansion in 6 months. 3mo MA through January 2013 stood at 56.5 - faster than 54.5 3mo MA through October 2012. In 2012, same period 3mo MA was 49.9 and in 2011 it was 47.6, while in 2010 it was 46.8, which means that the last 3mo MA expansionary reading (and strong one at that) is the first expansionary reading in 4 years.

Chart below shows snapshot of both indices over shorter period of time, allowing for better understanding of the underlying short term trend: 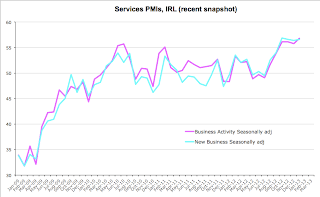 The close coincidence in series since November 2011 is indicative that sector activity is gaining momentum on foot of New Business Orders (as opposed to jobs inventories and backlogs) and trend acceleration since July 2012 also shows sustained momentum.

This blistering pace of activity should, however, be treated with some concern. Now, take a look at the rates of expansion here, contrasted with rates of robust rises in Employment. Employment index rose to 56.5 in January from 53.4 in December. The Index posted above 50 readings in 5 months in a row and 3mo MA for the index is now at 54.6, up on previous 3mo MA of 51.3. Over the last 6 months, thus, employment in services sector have expanded rather rapidly.

Meanwhile, profitability in the sector continued to contract: Profitability Index (I compute my own for comparative analysis with Manufacturing, but let's stick to 'official' Profitability reading for now) remained well below 50, at 49.2, marking 62nd consecutive month of contracting profits in the Services sector. 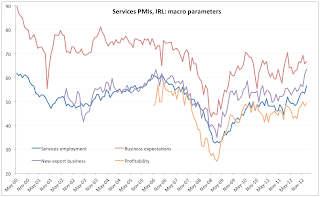 Now, ask yourselves a simple question: 62 months of uninterrupted collapse in profits, plus over the same period 11 months of expanding employment, plus 21 months over the same period of rapidly growing exports, equals what? How can catastrophically less and less profitable business retain relatively robust employment levels and expand dramatically exports? Oh, well, the answer to this dilema is a simple, but unpleasant one - most of our services activity (and roughly speaking 90% of our services exports activity) is dominated by the tax-optimising MNCs. In other words, while the headline numbers are rosy, the underlying reality is probably less tangible to the Irish economy than we would like to believe. Employment growth in these MNCs-led sectors is primarily focused on importing skills (so no effect of reducing unemployment), while shrinking profitability in the Business Services sector and Transport, Travel, Tourism and Leisure sector (which led in profitability decline) means lower revenues for the Exchequer and lower indigenous employment.

One thing Irish Stuffbrokers issuing upbeat reports on PMIs basis are too lazy to check is the composition of what they are talking about at the aggregate levels. Here's a simple snapshot of employment increases over the last 6 months, reported in the PMIs:

Contrasted by 6mo data for profitability:

It turns out, on average, over 6 months, the ENTIRE range of PMI-covered services subsectors have managed to post increases in employment, and even mor robust rises in New exports, with largest rises, by far in the MNCs-dominated ICT services and Financial Services. But Business Services - the ones that are suffering from deep cuts in profits - are also posting rises in exports and employment. This is either bonkers data collection, or a severe selection bias toward MNCs with tax optimisation, not real activity on their minds. 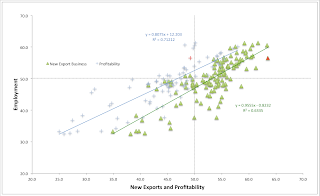 More on profitability conditions and employment in both Manufacturing and Services PMIs in subsequent posts, but overall, the data is very positive. It is just worth asking a question just how much relevant is this data to real economic activity?
Posted by TrueEconomics at 9:52 PM