Can't say much, but some debate has rekindled earlier today on twitter about the merits or failures of the Argentine model. In part, this revival of interest stems from the IMF issuing another Executive Board statement on the country (here) basically confirming Argentina's continued failure to implement measures to bring the country back on track with the IMF programme. In part, the said interest has been kept alive by various economics commentators, most notably Paul Krugman (see example here), putting Argentina forward as some sort of a maverick economy with miraculous escape velocity from the clutches of the IMF.

I am of no camp on Argentina. It has made hash of long term macroeconomic management, and had seen virtually no structural change on its erroneous ways of the past. On the other hand, by many macro aggregates, the country is muddling through its perpetual crisis rather well. Yet, some indicators point to very deep problems, namely: inflation, and government spending. It's a mixed bag and I have never advocated its mode of policy choices as a road for anyone to copy.

So with this rather neutral stance, here are some comparatives between Argentina and the strongest economy in the region, Chile (now, Chile is in many ways an example of policy reforms I do like and do put forward occasionally as an example for other countries to pursue). 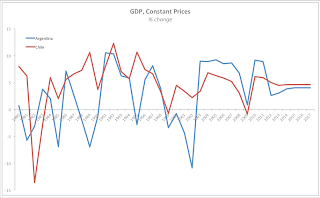 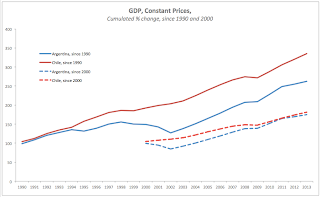 To make the growth comparatives more clear, let's create two indices, setting GDP at 100 for 1990 and for 2000 for both countries and then computing cumulated path of GDP. It is clear that Chilean economy relative outperformance during the 1990s is the core driver for cumulated differences between the two economies, with that difference becoming virtually zero on aggregate during the 2000-2013 period.

GDP at an aggregate level can present a distorted picture of actual activity, due to a number of demographic factors and price comparatives differentials. Here is what has been happening in the two countries in terms of PPP-adjusted (controlling for price and FX rates differentials) GDP per capita.
Per chart below, the comparatives are sensitive to the specific sub-period: 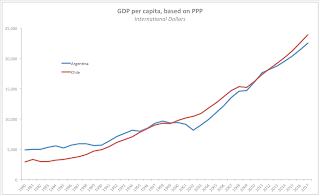 In absolute terms, per capita income in both countries is tracing relatively similar path, although Chile is running slightly ahead of Argentina since 2012 and this is expected to amplify slightly in 2013-2017. However, the starting point for these comparatives was a significant gap between Chile and Argentina in incomes in the 1980s that became erased by 2000. To see this better, consider the index of GDP epr capital, PPP-adjusted that normalises both countries incomes to 100 in 1980: 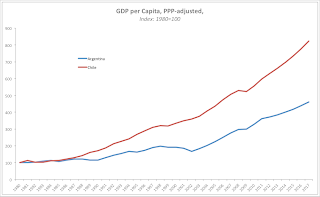 Since parity in the 1980 (imposed by assumption here) two countries' incomes closely matched each other until ca 1987. There after, Chile saw dramatic uplift in income per capita, while Argentina experienced relative stagnation until roughly 2001-2002. Since 2002, however, both countries income per capita are growing in relatively parallele fashion, although Chile remains an out-performer compared to Argentina.

Relative differences between the countries in terms of income per capita dynamics are closely matched to difference in savings and investment: 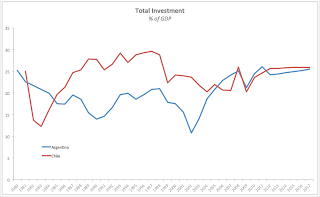 Identical to investment dynamics are traceable across Gross National Savings: 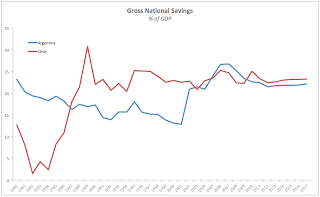 Per unemployment - another variable heavily 'massage-able' by the Governments (and Argentina had quite a share of accusations here): 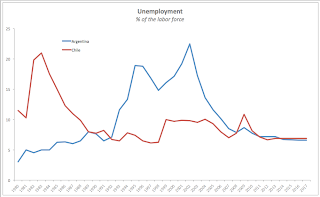 It is very clear that for Argentina, sky-high rates of unemployment that were present in 1994-2004 period have been declining over time, with 2008-2013 unemployment rates virtually identical for both Chile and Argentina. There is little drama here, as far as we can trust Argentine numbers.

I will focus my attention on comparatives between two countries in terms of fiscal and external balance in the next post, but so far, there is little evidence to suggests hugely dramatic underperformance of Argentine economy in recent years compared to 'best-in-class' case of Chile - a country that as it happens is similar to Argentina in terms of income per capita (which is, of course, a major reason why Argentina should not be compared directly with Brazil).

Stay tuned for more.
Posted by TrueEconomics at 3:18 PM