Just as G20 was starting to make noises about corporate tax havens at their meeting in Moscow (here) the OECD produced a convenient paper on the topic of tax avoidance. The paper is rather 'neutered' when it comes to language, but nonetheless offers couple fascinating insights, especially when it comes to Ireland. The report is titled "Addressing Base Erosion and Profit Shifting"

Per OECD: looking "specifically at the effects of income-shifting practices of United States based MNEs [Clausing, 2011],  …finds large discrepancies between the physical operations of affiliates abroad and the locations in which they report their profits for tax purposes: the top ten locations for affiliate employment (in order: the United Kingdom, Canada, Mexico, China, Germany, France, Brazil, India, Japan, Australia) barely match with the top ten locations for gross profits reporting (in order: the Netherlands, Luxembourg, Ireland, Canada, Bermuda, Switzerland, Singapore, Germany, Norway and Australia)."

"A report of the United States Congressional Research Service (Gravelle, 2010) concludes that there is ample and clear evidence that profits appear in countries inconsistent with an economic motivation. The report analysed the profits of United States controlled foreign corporations as a percentage of the GDP of the countries in which they are located. It finds that for the G-7 countries the ratio ranges from 0.2% to 2.6% (in the case of Canada). The ratio is equal to 4.6% for the Netherlands, 7.6% for Ireland, 9.8% for Cyprus, 18.2% for Luxembourg. Finally, the study notes that the ratio increases dramatically for no-tax jurisdictions with for example, 35.3% for Jersey, 43.3% for Bahamas, 61.1% for Liberia, 354.6% for British Virgin Islands, 546.7% for the Cayman Islands and 645.7% for Bermuda."

Now, of course, Ireland is a conduit via which profits of MNCs are off shored to zero tax jurisdictions, so one wonders, how much of Cayman's and BVI or Bahamas' 'profits' are really coming via Ireland.

The whole report addresses the issue of 'base erosion' in tax systems - the topic also close to heart to Ireland, as CCCTB proposals at the EU level are attempting to deal exactly with that problem and represent a massive threat to Ireland's tax optimisation industry.

Based on the data in the report, here are some revealing charts: 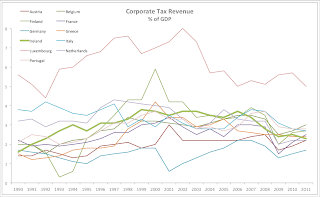 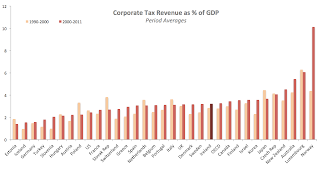 It is first worth noting that in absolute terms, corporate tax revenues overall are not that spectacular in the case of Ireland, contributing at an OECD average levels to the Exchequer. And these revenues have been falling, not rising, in importance despite a severe decline in GDP during the crisis: 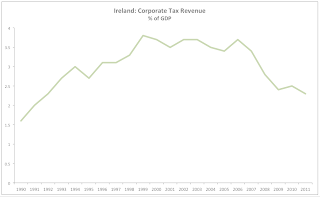 Three interesting aspects per above are:


However, the trend toward deterioration in revenues importance to the Exchequer during the crisis (driving down the 2000-2011 average) stands in contrast with rising importance of the corporation tax in the decade of the 1990s: 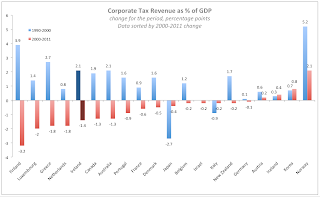 It is illustrative to highlight the change in relative importance of the corporation tax revenues over the last decade: 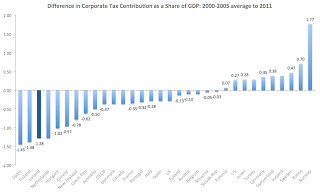 Posted by TrueEconomics at 9:41 PM