In the previous post I looked at the real economy comparatives between Latin America's best-in-class Chile and worst-in-class Argentina.

As promised, now a quick look at the Government and external balances.

If in terms of real economy comparatives, Argentina hardly significantly underperformed Chile since the mid 2000s, in terms of straight down the line General Government Deficits the country is a veritable basket case: 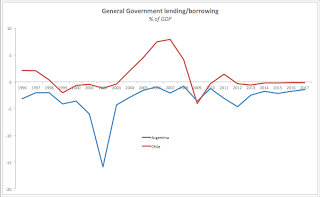 However, much of the headline deficit underperformance by Argentina relates directly to the burden of debt servicing. In this context, Primary Deficits are much more benign to Argentina's case, as illustrated in two charts below: 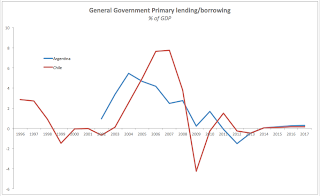 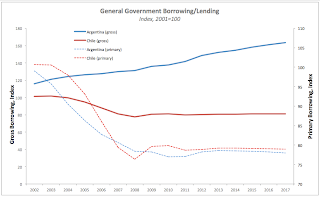 Of course, Argentina's debt mountain is legendary... or should it be 'was legendary'? 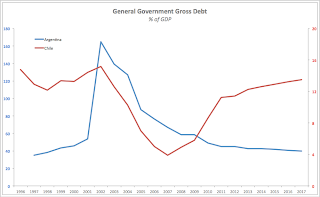 Argentina's Government Debt/GDP ratio has peaked at 165% in the crisis year of 2002. So much is true. However, overall, the ramp up of debt (dynamics of debt accumulation) and the reduction in debt ratio to economy since the peak have been more than telling. In 1996-2000 Argentina's Government debt/GDP ratio averaged 40.6% - hardly a significant drag on either growth or public finances. In 2001-2005 the same stood at 114.44% of GDP - clearly well in excess of the known bounds for debt sustainability. With debt restructuring and return of economic growth, Argentina's Government debt/GDP ratio fell to 61.99% average for 2006-2010 period and is now on track to hit 43.42% average for 2011-2015. In other words, the country is expected to basically return to pre-crisis levels of Government debt burden by the end of 2015, some 13 years after the crisis.

On external account side, Chile has been a recipient of the strong capital inflows from abroad over recent decades, the position that allowed the country to run significant deficits on trade side. Despite this, overall exports in both countries have been growing roughly-speaking in tandem, with slightly higher volatility for Argentina: 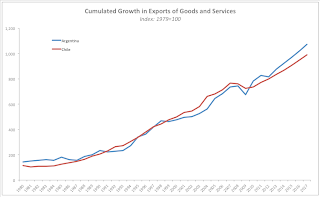 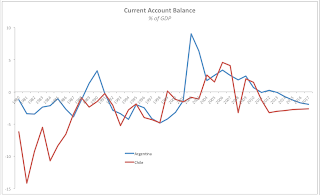 On the net, excluding fiscal performance and inflation, and keeping in mind that some of the official stats from Argentina are rather dodgy, there is little evidence to suggest that Argentine economy is a 'veritable basket case'. Instead, it is rather an economy struggling with Government debt overhang and fiscal situation whereby benign primary deficits are simply overwhelmed by debt servicing costs. In that sense, Argentina is closer to Italy (correcting for differences in growth rates) than to the 1990s crisis-stricken HIPCs.