In line with the grand claims of revival of domestic demand around Christmas season 2012 and of green shoots sprouting everywhere where IBEC & IDA cast their eyes, the latest car sales stats are showing the glorious return of the autotrade to the late 1970s and late 1980s.

Per latest data, covering January 2013, as released by CSO (link here), gains in Irish trade competitiveness (aka contraction in domestic demand-driven imports) have bit hard into the motor sales sector.

But possibly even more revealing are the stats for the month of January taken from 1965 onward: 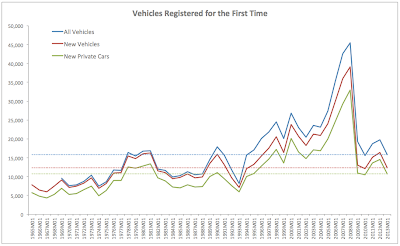 Welcome back to the future where exports are rescuing us... possibly from ourselves.
Posted by TrueEconomics at 7:19 PM

Yes, not good;
But they are hoping for a second lift in July when the 132 reg is out. Let's see if it works!

The sad truth of the matter is that the number of private vehicles on the road needs to be cut in half (at the very least) at these high $ prices.

Which means we go back to Y1990 ~ ownership numbers.
There was a unsustainable credit boom in Ireland during the late 70s .......(agri land credit boom) which fed into new car sales.
Capital was thus wasted for no / negative return.