CSO has recently published data on R&D spending in Ireland for 2011/2012. That's right: in the days of Big Data, Open Data, etc our 'Knowledge Economy' is operating in the environment where evidence is more than 13 months old. In fact, the reality is even more bleak: CSO data for 2012 covers only actual data on current spending, with capital spending covered by estimates. In brief, Ireland's pro-Knowledge Economy policy formation is backed by old and hardly impressive in scope data.

However, given we have nothing better to go, let's take a look at what the latest stats tell us about the Irish economy's R&D intensities. In what follows, I reference combined time series with both actual and estimated data points.

However, the above growth is distributed unequally across a number of items of expenditure and types of enterprises:


In other words, there is some evidence of potential cost shifting via R&D credits onto workforce, away from physical investment, as well as evidence of re-orientation of our exports away from manufacturing toward services.

In terms of enterprises types (Small enterprises, SEs at <50 at="" employees="" enterprises="" large="" medium="" mles="" to="">50 employees):
The above is consistent with the view that in 2011/2012 there was re-orientation in expenditure to either reduce labour costs and / or support services-focused sectors, away from traditional R&D spend on equipment, software and IP.

Table below summarises relative allocations to specific lines of expenditure by the types of companies: 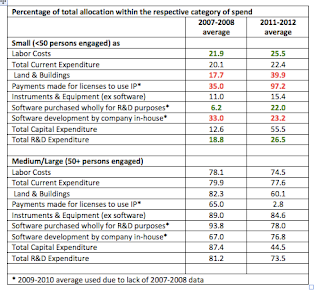 For SEs I highlighted in color the areas of strength in the new data (green) and weaknesses (red). As can be clearly seen, Irish smaller enterprises are not at the races when it comes to overall investment and spending relating to R&D activities, with 26.5% of the total nationwide expenditure captured by SEa, although the good news is that this number has risen compared to 2007-2008 period. In particular, weak dynamics are present on the labour costs side. At the same time, Irish small enterprises tend to purchase more IP from outside (97.2% of total expenditure nationwide on IP purchases is by SEs) and  tend to develop less software in-house.

The above results show just how much more needs to be done at the SEs levels to drive forward knowledge intensification of the economy. At the same time, overall headline figure of 1.53% of GNP being spent on R&D related investment and expenditures is also a major, system-wide problem. It is even more egregious when one considers the fact that Ireland is the base for European operations of many major multinationals.

I will be blogging more on the analysis of the 2011/2012 figures in coming days, so stay tuned.
Posted by TrueEconomics at 5:42 PM