In a recent post I looked at some troublesome trends in the overall R&D spending in Ireland. As promised, here are some more details, with the employment levels and R&D spend breakdown by nationality of enterprise ownership. This data, unfortunately, only goes as far as 2011. 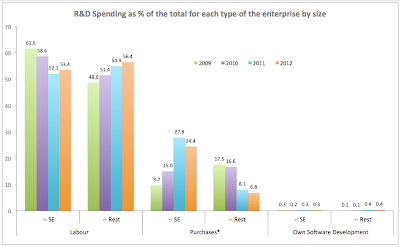 As the chart clearly shows, the bulk of R&D spend is allocated to Labour costs. I wrote about this earlier, so no need to repeat. But time trend is interesting in all costs:


In terms of employment generated / supported by the R&D spending, the chart below shows distribution across the core categories of employees: 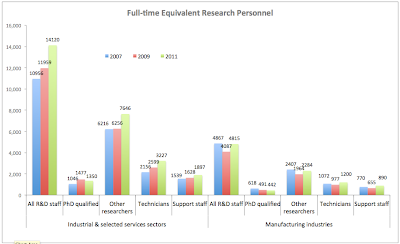 Despite the fanfares around 'Knowledge Economy' jobs, the chart clearly shows that the numbers of R&D employees with PhD qualification - the basic level in modern science to engage in advanced research - has declined in 2009-2011 period by 8.6%, although it is still ahead of 2007 levels for the Industrial & Selected Services sectors. It also dropped in 2007-2009 and 2009-2011 in the Manufacturing sector, with 2009-2011 decline of 10%.

This is probably consistent with the R&D activity shifting into ICT services sector, where share of PhD-led research is smaller and much of the research activity conducted is focused not on primary innovation, but adaptation, customisation, other incremental innovation. This is also consistent with much of the R&D activity in Ireland being secondary in nature - not patent-generating or new product development, but incremental improvement. The third potential factor driving these changes is possible expansion of collaborative work between academic institutions and producers. 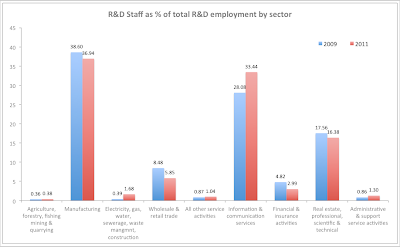 It is very apparent that our flagship exporting sector, the 'Big Hope' for the 'Innovation Ireland' programmes - the agricultural sector is simply not engaged with much of R&D activity. The sector posts lowest share of R&D employment by far. Exactly the same holds for virtually every indigenous sector. The chart is extreme: MNCs-dominated sectors are clear leaders in R&D-related employment, domestically-oriented sectors are clear laggards. Remember renewable energy? We are supposedly filthy rich in inputs in the sector (wind, wave etc). We are also, supposedly, engaging in massive research in the area and have aggressive programmes to drive the alternatives energy sector into exporting electricity to the UK and selling know-how all around the world. However, even with the 'white elephant' project like e-cars from the ESB, sector employment of R&D personnel is simply inconsistent with the grotesque claims made about our alternative energy industry competitiveness or position.

I will post on the breakdown of R&D activity by the company ownership (Irish v Non-Irish owned enterprises) later, so stay tuned.
Posted by TrueEconomics at 6:38 PM