This is an unedited version of my article in Sunday Times March 4, 2012.


This week, the conflicting news from the world’s largest economy – the US, have shown once again the problems inherent in economic forecasting. Even a giant economy is capable of succumbing to volatility while searching to establish a new or confirm an old trend. The US economy is currently undergoing this process that, it is hoped, is pointing to the reversal in the growth trend to the upside in the near future. The crucial point, however, when it comes to our own economy, is that even in the US economy the time around re-testing of the previously set trend makes short-term data a highly imperfect indicator of the economic direction.

In contrast to the US economy, however, Irish data currently bears little indication that we are turning the proverbial corner on growth. It is, however, starting to show the volatility that can be consistent with some economic soul-searching in months ahead. Majority of Irish economic indicators have now been bouncing for 6 to 12 months along the relatively flat or only gently declining trend. Some commentators suggest that this is a sign of the upcoming turnaround in our economic fortunes. Others have pointed to the uniform downward revisions of the forecasts for Irish growth for 2012 by international and domestic economists as a sign that the flattening trend might break into a renewed slowdown. In reality, all of these conjectures are at the very best educated guesswork, for our economy is simply too volatile and the current times are too uncertain to provide grounds for a more ‘scientific’ approach to forecasting.

Which means that to discern the potential direction for the economy in months ahead, we are left with nothing better than look at the signals from the more transparent, real economy-linked activities such as monthly changes in prices, retail sales and house price indices, and longer-range trade flows statistics, unemployment and workforce participation data.

This week we saw the release of two of the above indicators: residential property price index and retail sales. The former registered another massive decline, with residential property prices falling 17.4% year on year in January 2012, after posting a 16.7% annual decline in December 2011 and 15.6% decline in November 2011. With Dublin once again leading the trend compared to the rest of the country, there appears to be absolutely no ‘soul-searching’ as house prices continue to drop. House prices, of course, provide a clear signal as to the direction of the domestic investment – and despite all the noises about the vast FDI inflows and foreign buyers ‘kicking tyres’ around empty buildings and sites – this direction is down.

More interesting are the volatile readings from the retail sales data.

Looking at the detailed decomposition of sales, out of twelve core Retail Businesses categories reported by CSO, ten have posted annual contractions in January in terms of value of sales. The two categories that posted increases were Fuel (up 5%) and Non-Specialised Stores (ex-Department Stores) (up 1.7%). The former posted a rise due to oil inflation, while the latter represents a small proportion of total retail sales – neither is likely to yield any positive impact on business environment in Ireland. In volume terms, increases in sales were recorded also in just two categories. Non-Specialised Stores sales rose 1.0%, while Pharmaceuticals Medical and Cosmetic Articles rose 1.5% year on year. Overall, only one out of 12 categories of sales posted increases in both value and volume of sales. All discretionary consumption items, including white goods and household maintenance items posted significant, above average declines in a further sign that households are continuing to tighten their belts, cutting out small-scale household investment and durables. The trend direction is broadly in line with November 2011-January 2012 3-months averages, but showing much sharper rates of contraction in demand in January.

The above confirm the broader downward trend in domestic demand that is relatively constant since Q1 2010 and is evident in value and volume indices as well as in total retail sales and core sales. More importantly, all indications are that the trend is likely to persist.

One of the core co-predictors – on average – of the retail sector activity is consumer confidence. Despite a significant jump in January 2012, ESRI consumer confidence indicator continues to bounce along the flat line, with current 6 months average at 56.5 virtually identical to the previous 6 months average and behind 2010-2011 average of 57.3. Based on the latest reading for consumer confidence, the forecast for the next 3 months forward for retail sales is not encouraging with volumes sales staying at the average levels of the previous 6 months and the value of sales being supported at the current levels solely by energy costs inflation.

Lastly, since 2010 I have been publishing an Index of Retail Sector Activity that acts as a strong predictor of the future (3 months ahead) retail sales and is based both on CSO data and ESRI consumer confidence measures, adjusted for income and earnings dynamics. The Index current reading for February-April is indicating that retail sales sector will remain in doldrums for the foreseeable future, posting volume and value activity at below last 6 months and 12 months trends.

Which means that the sector is likely to contribute negatively to unemployment and further undermining already fragile household income dynamics for some of the most at-risk families. During the first half of the crisis, most of jobs destruction in both absolute and relative terms took place in the construction sector, dominated by men. Thus, for example, in 2009 number of women in employment fell 4.2%, while total employment declined 8.1%. By 2010, numbers of women in employment were down 2.8% against 4.2% overall drop in employment. Last year, based on the latest available data, female employment was down 2% while total employment fell 2.5%. In other words, more and more jobs destruction is taking place amongst women, as further confirmed by the latest Live Register statistics also released this week, showing that in February 2012, number of female claimants rose by 3,479 year on year, while the number of male claimants dropped 8,356 over the same period.

Traditionally, acceleration of jobs destruction amongst women is associated with increasing incidences of dual unemployment households. This is further likely to be reinforced by the increasing losses of female jobs in the retail sector, due to overlapping demographics and relative income distributions. Such development, in turn, will put even more pressure on both consumption and investment in the domestic economy. 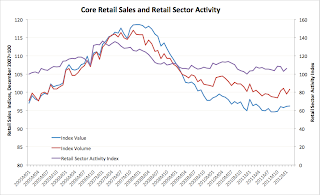 Source: CSO and author own calculations

The forthcoming Referendum on the EU Fiscal Compact will undoubtedly open a floodgate of debates concerning the economic, social and political implications of the vote. Yet, it is the economic merits of the treaty that require most of the attention. A recent research paper by Alessandro Piergallini and Giorgio Rodano from the Centre for Economic and International Studies, University of Rome, makes a very strong argument that in the world of distortionary (or in other words progressive) taxation, passive fiscal policies (policies that target constitutionally or legislatively-mandated levels of public debt relative to GDP) are not feasible in the presence of the active monetary polices (policies that focus solely on inflation targeting). In other words, in the real world we live in, the very idea of Fiscal Compact might be incompatible with the idea of pure inflation targeting by the ECB. Which is, of course, rather intuitive. If a country or a currency block were to pre-commit itself to a fixed debt/GDP ratio, then inflation must be allowed to compensate for the fiscal imbalances created in the short run, since levying higher taxation will ultimately lead to economic distortions via household decisions on spending and labour supply. Given that ECB abhors inflation, the Fiscal Compact must either be associated with increasingly less distortionary (less progressive) taxation or with the ECB becoming less of an inflation hawk.
Posted by TrueEconomics at 6:45 PM