In the first post on QNA results for 2011 I covered data for annual GDP and GNP in constant prices terms. The second post focused on GDP/GNP gap and the cost of the ongoing Great Recession on the potential GDP and GNP. The third post focused on quarterly sectoral decomposition of GDP and GNP in constant prices terms. And a short digression from QNA results here showed how difficult it is, really, to reach any consensus on some of Ireland's economic performance parameters. Following these, Part 4 of QNA analysis focused on nominal (current prices) quarterly data. Part 5 of the analysis focused on decline in capital investment in Ireland during the crisis.In this, last, post onQNA results for 2011, I will focus on the idea of the 'exports-led' recovery.


We are all familiar with the thesis that exports will drive this economy out of the recession. This has been the leitmotif of the Irish Governments since 2008 and it remains to be the core conjecture still. And there are some reasonable logical grounds for believing this proposition:

In reality, of course, whatever one says about trade performance, international trade, once we net out imports of intermediate inputs into exports production and transfers abroad as a payment of profits by the multinationals, is by far not as huge as the Government would love to claim. And international trade-supported employment is also relatively small. Pair that with the fact that our economy had experienced a massive collapse of domestic activity and you get the picture: there will be no recovery from the crisis unless domestic economy regains growth momentum. 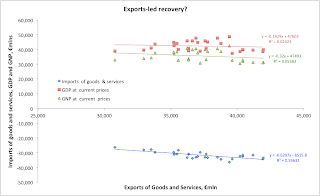 How can that be, you ask? Simples: if you think of it, higher exports are delivered primarily by the MNCs operating in Ireland. And during the crisis this delivery has been associated with:
Where would the huge links between economic well-being and exports, required to compensate for steep declines in domestic spending and investment activities, come from, then?

Now, don't take me wrong - exports do provide huge support for our economy and real benefits and jobs. I wrote about this time and again. But these are not nearly enough to keep this economy afloat. What Ireland needs to get out of this mess are - very broadly speaking - two sets of outcomes:
In both - Irish policies are currently failing us and record-busting exports as we know them today are not providing the rescue vehicle we require.

Posted by TrueEconomics at 2:15 PM

Great article, full of explanations. I had the same (humble) opinion. With no internal economy growth we won't see the light. Behind the numbers there are so many people unemployed, and the employment level is really low. I don't know why they talk only about unemployment level on TV. Once somebody is off the dole we don't count him/her any more?
These people that do not work do not spend any money in the economy or, worse, they leave the country, they don't even need to buy basic goods in this economy!