EU's latest catch phrase is 'growth'. The Commission is banging on about subsidies along with an old tune of EU2020 'plan' for subsidies, picking of winners and rewarding the whiners. The IMF is whinging about 'structural reforms' which is all about extracting some sort of a surplus from something other than domestic consumers demand and investment. National authorities are singing the diverse songs - calling for subsidies and more borrowing from the North in the Periphery, calling for less transfers to the Periphery in the North. Belgium, as ever stuck in-between, has all of the above to the detriment of national dis-unity, which by now is a second-stage show, given all the dis-unity in the European Union.

And the reality is - EU and especially the Euro area are falling out of the world's economic orbit, with speeds that are accelerating - from the modest declines of the 1980s to faster rates in the 1990s and to acceleration in 2000s followed by speedier 2010s.

Note, all data below is sourced from the IMFWEO database with my calculations based on the same.

Here's how the mighty have fallen: 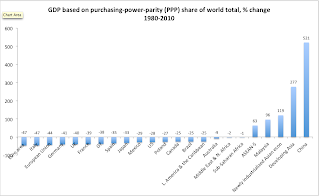 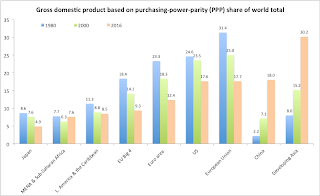 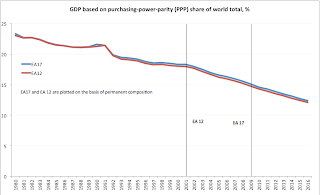 
No matter how you spin it - Euro area is going down in world rankings of growth areas and it is moving at the speed worse than the one attained by Japan.

The last chart above clearly shows that the rate of Euro area's might decline has accelerated dramatically since 2001 and that this rate is invariant to the current crisis.

More subsidies, Brussels, please! More 5-year plans for 'Knowledge, Green, Social, Whatnotwellhaveit Economy', Commission, please! They all have been working so well so far.
Posted by TrueEconomics at 9:35 PM

Percentage of the pie is a zero sum game, so surely a large portion of this is simply mathematical inevitability as China starts to pull it's weight?

How would the graph look different if it was just a trend towards economic parity?