18/3/2012: Fiscal Stimulus Multipliers - US data and some Irish considerations

In a recent paper, “Fiscal Stimulus and Distortionary Taxation”, Thorsten Drautzburg and Harald Uhlig (published Becker Friedman Institute for Research in Economics Working Paper No. 2011-005 ) estimate the fiscal policy multipliers from the federal spending programmes under the American Recovery and Reinvestment Act (ARRA) of 2009.

In addition to the traditional literature, the authors include a number of coincident effects:

The study distinguishes between short-run and long-run multipliers in a benchmark model, finding: 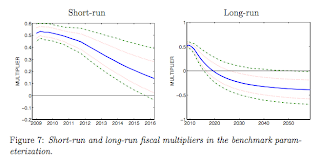 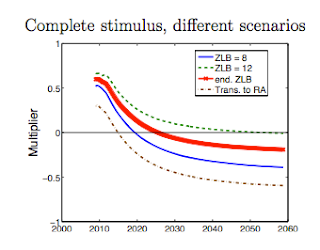 
The study also incorporates consideration of the time-varying differentials between the central bank-set interest rates, government borrowing costs (bond rates) and returns to private capital (cost of private sector credit). The paper shows that “these wedges are indeed the key to understanding the recession of 2007 to 2009.” Although the study does not explicitly quantify these drivers effects, one can suspect that in the case of Ireland, dramatic increases in the cost of Government borrowing, alongside the rise in retail-level interest rates due to banks bust would have much more adverse impact on fiscal stimulus effectiveness. Whether or not these effects are enough to swing the stimulus short-run multiplier to the negative territory we do not know. But it is pretty safe to assume that they will make long-term costs of the stimulus more severe.

The use of New Keynesian model specification allows authors to conclude that “the model here is heavily tilted towards a model in which fiscal stimulus is often thought to work well: we therefore believe that the negative long-run effects of fiscal stimulus should give pause to arguments in its favor. Even at the short horizon, the benchmark multiplier is just around 0.5.”

Another interesting result is that consumption taxes, rather than income taxes are a better way to offset the costs of stimulus in the longer term. This is intuitive and consistent with other evidence. However, the paper finds that “adjusting [raising] consumption taxes only yields a slightly higher multiplier than adjusting labor tax rates.”

Please keep in mind that the Irish stimulus theory supporters have ardently argued that fiscal stimulus must be financed via income tax increases, not consumption tax hikes and have opposed even a modest Budget 2012 shift of tax burden on VAT.
Posted by TrueEconomics at 10:08 AM