Last week, as Ireland and the world celebrated the St Patrick’s Day, close to fifteen hundred Irish residents, including close to a thousand of Irish nationals, have left this country. In all the celebratory public relations kitsch, no Irish official has bothered to remember those who are currently being driven out of their native and adopted homeland by the realities of our dire economic situation.

According to the latest CSO report – covering the period from 1987 through 2011, emigration from Ireland has hit a record high. In a year to April 2011 some 76,400 Irish residents have chosen to leave the country, against the previous high of 70,600 recorded in 1989. For the first time since 1990, emigration has surpassed the number of births.

Given the CSO methodology, it is highly probable that the above figures tell only a part of the story. Our official emigration statistics are based on the Quarterly National Household Survey, unlikely to cover with reasonable accuracy highly mobile and less likely to engage in official surveys younger households, especially those that moved to Ireland from East Central Europe.

For example, emigration numbers for Irish nationals rose 200% between 2008 and 2011, with steady increases recorded every year since the onset of the crisis. Over the same period of time, growth in emigration outflows of EU15 (ex-UK) nationals from Ireland peaked in 2008-2009 and halved since then. Prior to 2010, Irish nationals contributed between 0% and 10% of the total net migration numbers. By 2010 and 2011 this rose to 42% and 68% respectively. Meanwhile, the largest driver of net migration inflows prior to the crisis - EU12 states nationals - were the source of the largest emigration outflows in 2009, but their share of net outflows has fallen to 39% and 13% in 2010 and 2011 respectively. There were no corresponding shifts in Irish and non-Irish nationals’ shares on the Live Register. In other words, unemployment data for non-Nationals does not appear to collaborate the official emigration statistics, most likely reflecting some significant under-reporting of actual emigration rates for EU12 and other non-EU nationals.

There are more worrisome facts that point to a dramatic change in the migration flows in recent years. Back in 2004-2007 there were a number of boisterous reports issued by banks and stockbrokerages that claimed that Irish population and migration dynamics were driving significant and long-term sustainable growth into the Irish economy. The so-called demographic dividend, we were told, was the vote of confidence in the future of this economy, the driver of demand for property and investment, savings and consumption.

In 2006, one illustrious stockbrokerage research outfit produced the following conclusions: “The population [of Ireland] is forecast to reach 5 million in 2015… The labour force is projected to grow at an annual average 2.2% over the whole period 2005 to 2015. Combined with sustained 3% annual growth in productivity, this suggests the underlying potential real rate of growth in Irish GDP in the five years to 2010 could be close to 5.75%. Between 2011 and 2015, the potential GDP growth rate could cool down to around 5%.”

Since the onset of the crisis, however, the ‘dividend’ has turned into a loss, as I predicted back in 2006 in response to the aforementioned report publication. People tend to follow opportunities, not stick around in a hope of old-age pay-outs on having kids. In 2009, only 33% of new holders of PPS numbers were employed. Back in 2004 that number was 68%. Amazingly, only one third of those who moved to Ireland in 2004-2007 were still in employment in 2009. Almost half of those who came here in 2008 had no employment activity in the last 2 years on record (2008 and 2009) and for those who came here in 2009 the figure was two thirds.

In more simple terms, prior to the crisis, majority (up to 68%) of those who came here did so to work. Now (at least in 2009 – the last year we have official record for) only one third did the same. It is not only the gross emigration of the Nationals and Non-Nationals that is working against Ireland today. Instead, the changes in employability of Non-Nationals who continue to move into Ireland are compounding the overall cost of emigration.

In order to assess these costs, let us first consider the evidence on net emigration in excess of immigration. In every year – pre-crisis and since 2008, there were both simultaneous inflows and outflows of people to and from Ireland. In 2006, the number of people immigrating into Ireland was above the number of people emigrating from Ireland by 71,800. Last year, there was net emigration of 34,100. Between 2009 and 2011, some 76,400 more people left Ireland than moved here.

Assuming that 2004-2007 period was the period of ‘demographic dividend’, total net outflows of people from the country in the period since 2008 through 2011 compared to the pre-crisis migration trend is 203,400 people. In other words, were the ‘demographic dividend’ continued at the rates of 2004-2007 unabated through the years of the current crisis, working population addition to Ireland from net migration would have been around 2/3rds of 203,400 net migrants or roughly 136,000 people. Based on the latest average earnings of €689.54 per week, recorded in Q4 2011, and an extremely conservative value added multiplier of 2.5 times earnings, the total cost of the ‘demographic losses’ arising from emigration can be close to 8% of our GDP. And that is before we factor in substantial costs of keeping a small army of immigrants on the Live Register. Some dividend this is.

This is only the tip of an iceberg, when it comes to capturing the economic costs of emigration as the estimates above ignore some other, for now unquantifiable losses, that are still working through the system.

In recent years, Ireland experienced a small, but noticeable baby boom. In 2007-2007, the average annual number of births in Ireland stood at just below 60,000. During 2009-2011 period that number rose by almost 25%. 2011 marked the record year of births in Ireland since 1987 – at 75,100. In the environment of high unemployment, elevated birth rates can act to actually temporarily moderate overall emigration, since maternity benefits are not generally transferable from Ireland to other countries, especially the countries outside the EU. Even when these benefits do transfer with families, new host country benefits replacement may be much lower than the benefits in Ireland. Which, of course, means that a number of emigrants from Ireland can be temporarily under-reported until that time when the maternity benefits run their course and spouses reunite abroad.

Even absent the above lags and reporting errors, net migration is now running close to its historic high. In 2011, there were total net emigration of 34,100 from Ireland against 34,500 in 2010. These represent the second and the first highest rates of net emigration since 1990.

At this stage, it is pretty much irrelevant – from the policy debate point of view – whether or not emigrants are leaving this country because they are forced to do so by the jobs losses or are compelled to make such a choice because of their perceptions of the potential for having a future in Ireland. And it is wholly academic as to whether or not these people have any intentions of returning at some point in their lives. What matters is that Ireland is once again a large-scale exporter of skills, talents and productive capacity of hundreds of thousands of people. The dividend is now exhausted, replaced by a massive economic, not to mention personal, social, and political costs that come along with the Government policies that see massive scale emigration as a ‘safety valve’ and/or ‘personal choice’. 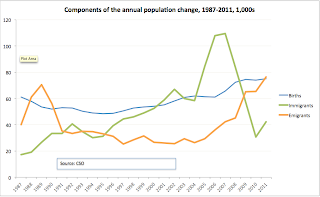 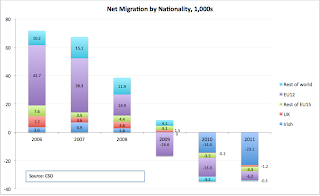 On 14th of March, Governor of the Central Bank of Ireland, Professor Honohan has told Limerick Law Society that Irish banks should be less inhibited about repossessing properties held against investment or buy-to-let mortgages. This conjecture cuts across a number of points, ranging from the capital implications of accelerated foreclosures to economic risks. However, one little known set of facts casts an even darker shadow over the banks capacity to what professor Honohan suggests they should. All of the core banking institutions in the country currently run large scale undertakings relating to covered bonds and securitizations they issued prior to 2008 crisis. Since 2008, the combination of falling credit ratings for the banks and accumulation of arrears in the mortgages accounts has meant that the banks were forced to increase the collateral held in the asset pools that back the bonds. In the case of just one Irish bank this over-collateralization increased by 60% in the last 4 years. This is done in order to increase security of the Covered Bond pool for the benefit of the Bondholders and is achieved by transferring additional mortgages into the pool. In just one year to December 2011, the said bank transferred over 26,000 new mortgages into one such pool. As the result of this, the bank can face restrictions and/or additional costs were it to foreclose on the mortgages within the pool. Things are even worse than that. In many cases, banks now hold mortgages that had their principal value pledged as a collateral in one vehicle while interest payments they generate has been collateralized through a separate vehicle. The mortgage itself can potentially even be double-collateralized into the security pool as described above. The big questions for the Central Bank in this context are: 1) Can the banks legally foreclose on such loans? and 2) Do the banks have sufficient capital and new collateral to cover the shortfalls arising from foreclosing mortgages without undermining Covered Bonds security?

Posted by TrueEconomics at 3:39 PM

There are so many immigrants who never worked in Ireland, they should be sent home.They took and are still on generous benefits while our own native Irish find it difficult to get social welfare benefits.

The problem is that we are losing those migrants who are working and have great skills. The unemployable ones would have an incentive to stay here. That said, keep in mind - probably vast majority of migrants who are not working are retirees from other EU states and spouses and children.