In the previous post (here) we considered 2011 results for NationalAccounts in relation to sectoral composition of GDP and GNP in constant prices terms.

Recall that the headline results are:


As the result of the above, Irish GDP/GNP gap - the measure by which our Government and international agencies overestimate the true size of our real economy - has gone up from 20.61% in 2010 to 24.61% in 2011, marking absolute historical record. 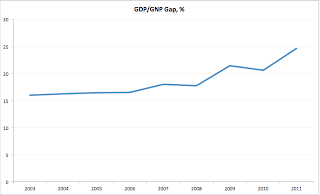 The above chart shows an interesting dynamic. Remember that there are claims being floated about that  there are many so-called uber-rich walking the streets of Ireland. Alas, here's a sticky point. People who are rich in Ireland today clearly do not hold Irish property in any significant proportion of their protfolia, since the can't remain rich with property values down by more than 50% in the country. They are also not holding Irish equities - because these are still substantially down on their pre-peak valuations and because absent banks, there is really not much you could have invested in in terms of Irish shares before the crisis to begin with. This, in turn, implies that to be filthy rich, these individuals must own assets outside Ireland. Assets outside of Ireland pay dividends and some realised capital gains. Which, were they remitted to Ireland, would count as inflows into Ireland and compensate for MNCs and foreign investors expatriations out of Ireland. In other words, either there is no glut of the Irish rich or their assets and profits from these assets are not being on-shored into Ireland. Take your pick, but either way, good luck imposing a wealth tax on the so-called super rich.

The destruction of our national income as opposed to gross domestic product has been spectacular in recent years. As charts below illustrate, we are now well beyond much of hope of ever regaining the pre-crisis trend income levels. 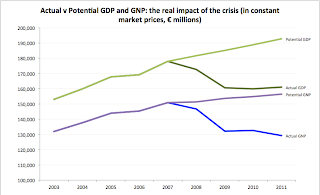 The losses accumulated in GNP compared to GDP have been more severe and this means that in 2011 overall, the burden of taxation has risen, not fallen, in the Irish economy when measured against GNP: 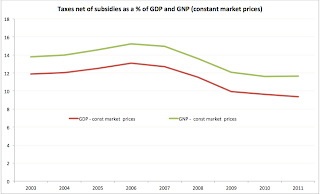 Keep in mind that the above chart shows taxes net of subsidies as a share of overall economy, which, of course, is an underestimate of real dynamics as subsidies have risen during the bust.

In the following post we will deal with some quarterly comparatives and results.
Posted by TrueEconomics at 11:03 AM