The study looked at the causes of the 2008–2009 financial crisis "together with its manifestations", using a Multiple Indicator Multiple Cause (MIMIC) model that allows for simultaneous causality effects across a number of variables.

The analysis is conducted on a cross-section of 85 economies. The study focuses "on international financial linkages that may have both allowed the crisis to spread across economies, and/or provided insurance. The model of the cross-economy incidence of the crisis combines 2008–2009 changes in real gross domestic product (GDP), the stock market, economy credit ratings, and the exchange rate. The key domestic determinants of crisis incidence that [considered] are taken from the literature, and are measured in 2006: real GDP per capita; the degree of credit market regulation; and the current account, measured as a fraction of GDP. Above and beyond these three national sources of crisis vulnerability, [Rose added] a number of measures of both multilateral and bilateral financial linkages to investigate the effects of international financial integration on crisis incidence."

The study covers three questions:
"I find that neither multilateral financial integration nor the existence of a Fed swap line is correlated with the cross-economy incidence of the crisis. [Pretty damming for those who argue that the crisis was caused / exacerbated by 'global' nature of the financial markets and for those who claim that 'local' finance is more stable. Also shows that the Fed did not appeared to have subsidized european and other banks, but instead acted to protect domestic (US) markets functioning.] There is mild evidence that economies with stronger bilateral financial ties to the United States (but not the large Asian economies) experienced milder crises. [This is pretty interesting since so many European leaders have gone on the record blaming the US for causing crises in European banking, while the evidence suggests that there is the evidence to the contrary. Furthermore, the above shows that we must treat with caution the argument that all geographic diversification is good and that, specifically, increasing trade & investment links with large Asian economies - most notably China - is a panacea for financial sector crisis cycles.]"

Here's a snapshot of top 50 countries by the crisis impact: 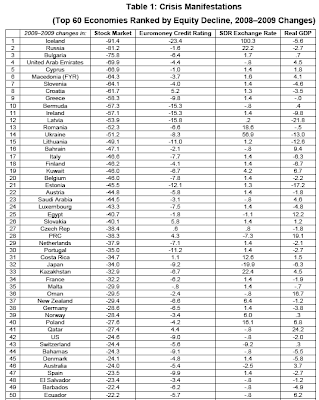 Quite thought provoking. One caveat - data covers periods outside Sovereign Debt crisis period of 2010-present and the study can benefit from expanded data coverage, imo.

Posted by TrueEconomics at 10:51 AM