Trying to sort out the convoluted 'deal' announced by the Minister today and juggle two kids, plus struggle against the computer on a strike from too many files open is a challenge. I might be missing something, but here's my understanding of the thing.

Brian Hayes on Today FM described the 'deal' (H/T to Prof Karl Whelan) as 'A creative piece of financial engineering.' Presume safely that Brian Hayes has a firm idea that this description is a 'net positive' for the Government.

Following the announcement by the Minister, there were no questions allowed by Dail members and the Minister moved on to the really important stuff - straight to press briefing in the Department of Finance. He might have opted for the right move, however, since the Dail, without any interrruption vigorously engaged in a debate on this important topic: 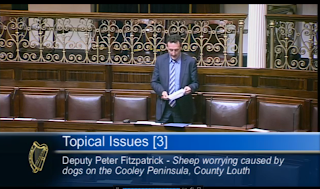 On that note, the last word (for now) goes to Prof Whelan: "Ok, after exchanges with very wise @OwenCallan I have decided that this deal defers the 3.1bn payment by only one year. Worse than hoped for" (quoting a tweet).

Welcome to the wonderland of wonderlenders.

Adding to the above, it is worth postulating directly - as I have argued consistently, ELA is the only debt we can - at least in theory - restructure and promo notes are a perfect candidate for such a restructuring. By converting a part of these into Government debt we are now de fact increasing probability of a sovereign default or restructuring.

Karl Whelan has an excellent post on the 'deal' - here.

ECB statement on Ireland's 'deal' is here. This clearly states that there is no deferral of any payment on Promo Notes and that the Noonan's 'deal' is a one-off. Thank gods it is - because at a cost of €400mln in added debt, plus €90mln in deficit, repeating this exercise in PR spin would be pretty expensive.


Today Irish Times is reporting that:

"Minister for Finance Michael Noonan said the big benefit was the money would not have to be borrowed to pay this year’s instalment on the promissory notes, the State IOUs paying for the bailouts."

A truly extraordinary statement, given the state will borrow the money (some €410mln more in principal and €90 mln more in interest than actually it had to borrow) using a Government bond to pay said IOU!

The Irish Times headline reads: "Government wins backing on €3.06bn payment". Yet there is no any 'backing' from anyone on this deal, because the deal does not change the payment itself. Read the above-linked ECB statement on the 'deal'.

In another extraordinary statement, the Irish Times (this is their own claim) says: "Further talks on a long-term deal on the remaining repayments as part of a wider restructuring of the banks will continue between the Government and the troika of the EU Commission, the ECB and the International Monetary Fund." Is there ANY evidence that any such negotiations are ongoing? Where is this evidence? Please, produce!


And an excellent piece from Namawinelake on the above: here.
Posted by TrueEconomics at 7:39 PM

"So on the net, we have just paid 400mln increase in debt, plus 90mln in deficit to buy ourselves an 'insurance' policy that should we need 3bn in 2013, we will be able to ask for it from the kindness of the EU and have it for no longer than a year. That's pretty damn expensive insurance policy."

Wow!
Rhetorically; was there a psychotropic vehicle involved too?
What was the point of this "deal" - "storing" "money" for another "jobs initiative"?
Or could it be possible that the Gov. have been covertly receiving advice from Bertie (texting from the Jacks in Nigeria); his vision for economic recovery.
Perhaps in tandem, with Sir Brian ex America; relaying data through one ear piece each, filling the lugs of Mr Noonan.

the spin today... yowza yowza... is all that comes to mind.

Because of the general discontent around the household tax, and their impending ard fheis, Fine Gael had to be seen to produce a result for the people. The ECB refused to play ball so Noonan's very expensive fudge was cooked up.

It is astounding that the government are willing to accrue further debt, many multiples of the revenue they hope to get from the household tax, just to save face.