In the previous post (here) we looked at the latest PMI data for Manufacturing. This post updates data for Services PMI. Subsequent posts will deal with employment and profit margins across both sectors.


As before, all original data is courtesy of NCB, with analysis provided by myself. Some of the indices reported are derived by me on the basis of proprietary models and are labeled/identified as such. 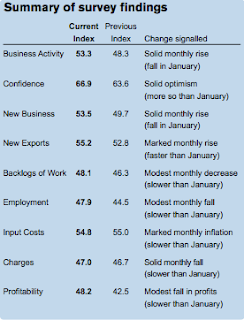 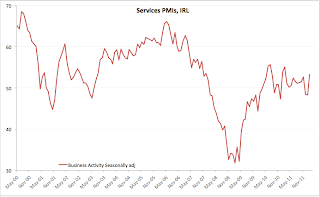 Per chart above, core Business activity in the sector showed improved dynamics in February (53.3 - statistically significantly different from 50) relative to contractionary reading in January (48.3). 12moMA is now at 51.0, while 3mo MA is 50.0, suggesting that the series are returning to the moderate growth trend established since the beginning of 2011.

Per chart below, the trend in overall Services PMI is driven by New Business Activity which also showed significant improvement in February (53.5) against January (49.7), with 12mo MA now running at 49.8 and 3mo MA at 50.2. 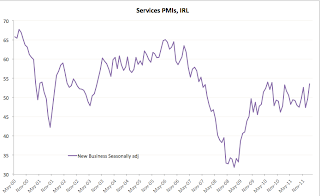 The following chart plots a number of sub-indices. The critical one is New Export Orders which shows significant increase mom into solid growth territory. The sub-index rose from 52.8 in January to 55.2 in February, with 12mo MA now at 52.5 and 3mo MA running ahead of that at 53.4.

Another critical sub-index is Employment, which remained disappointingly below 50 mark at 47.9, but improved from 44.5 in January. 12mo MA is at a very poor level of 47.7 and 3mo MA is at even worse level of 46.6. The sub-index has now been showing contraction in employment since May 2011, and barring April 2011 strange move above 50 mark, the sub-index remains signaling rising unemployment since February 2008. I will deal with employment signals in more details in the subsequent posts. 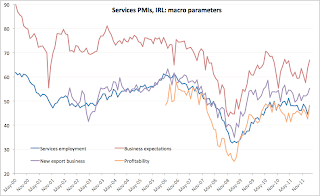 Lastly, February data showed slight moderation in the price deflation in terms of output prices/charges from 46.7 in January to 47 in February. On the other side of the profitability equation, input costs inflation moderated to 54.8 in February from 55 in January. The two indicators combine to result in slowdown in the deterioration in profit margins from 42.5 in January to 48.2 in February. Please note, this is not the same as an improvement in the profit margins. Profitability sub-index is now averaging 44.6 for 12mo MA and 45.3 for 3mo MA. There is basically continued shrinkage in the profit margins for Irish Services suppliers every month since December 2007. More detailed analysis of profitability will be posted in subsequent posts. 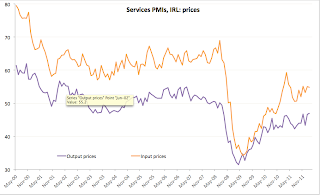 In the next post we will look at the Employment signals coming from the Manufacturing and Services PMIs.
Posted by TrueEconomics at 12:27 PM