This is an unedited version of my article for the current edition of the Village magazine.


Illegal corruption – in its various forms and expressions – is hardly a rarity in Irish society. So much we know. Perhaps less well understood, are the legally permitted forms of corrupt behaviour that contribute to social and economic degradation and undermine democratic institutions and state legitimacy.

Economists identify corrupt activities to include illegal abuses of the system, such as bribery, cartels,  explicit collusion, price fixing, and embezzlement. But corruption also includes activities that fall into grey areas of the law – tacitly allowed: cronyism, nepotism, patronage, implicit collusion, and influence-peddling.

Over the years, the Irish state recognised that both types of these activities exist in the realm of private and semi-state business, and in order to restrict the former forms of illegal corruption, has decided unofficially – of course – to give the perpetrators of the latter quasi-legal ones the strongest political representation in the land – direct access to policy formation. In recent decades our Government and elites Left and Right, went so far as to institutionalise the arrangement.

Since 1987, Social Partnership has constituted a closed shop with membership restricted to select organisations, representing certain subsets of Irish society. Since this membership restriction is codified and since Partnership is explicitly concerned with fixing prices for some forms of capital and inputs into production (for example – wages, that serve as the compensation for human capital, and via planning restrictions linked to State-determined development agenda, to land), it is both de jure and de facto a cartel. That it is a public cartel, as opposed to a private one, does not change its corrupt and corrupting nature.

This cartel actively and with State support promoted policies that led to gross distortions of the markets and of competition between the market players; and also led directly to the relegation of the State’s duty of care to consumers and ordinary investors. An unobservable, but nonetheless equally distorting feature of the system is the effect this system had on preventing formation of competitive enterprises and entrepreneurship, as Social Partners colluded to restrict and re-allocate (to their benefit) investment and employment opportunities, and re-shape the space of new policy ideas formation, formulation and expression.

Social Partnership rubber-stamped a policy of ‘Never at Fault, Never Responsible’ for our financial regulatory and supervisory regimes. It trumpeted the culture of unaccountability in the public and protected private sectors. Without Social Partnership support, it is hard to imagine the State sustaining the very regimes that led to open, but never-prosecuted violations of the law (e.g. breaches of regulatory liquidity-requirements), ethical codes (e.g. loans-for-shares machinations and misclassifications of deposits), MiFID (Markets in Financial Instruments Directive) requirements (e.g. the mis-selling of investment products by at least four banks in Ireland, explicitly uncovered two years ago) and violations of prudential ethics in financial regulation (e.g. resistance to full public-data disclosure and investor-suitability testing and protection in the case of property transactions).

Neither the Unions, nor any other Social Partners stood up at the Partnership Table in support of the handful of whistleblowers pointing to the above failures. The ‘straw man’ argument is that the Unions always advocated ‘more regulation’. Alas, history shows that other priorities miraculously took precedence time and again over the proper regulation of finance, the protected professions, quangos and pretty much every other aspect of Irish governance. These, of course, were pay and conditions for the Unions’ members, slush-funds for ‘training’ and ‘research’ activities, and state-board appointments, including to the boards of financial regulation and supervision bodies. Having been bought by the ‘robbers’, the self-appointed ‘cops’ have, since the late 1980s, stayed nearly silent lest they damage the regulatory charade performed by the Government and rubber-stamped by their own members in charge of the regulatory bodies.

The Unions, of course, were neither unique, nor the most active participants in regulatory capture of the state by vested interests. Irish semi-state companies, banks, protected professions and public sector own (outside the Unions-led) self-interests were. Nonetheless, by deploying the rhetoric of ‘integrity’ and by relying on the arguments that their actions ‘protected the vulnerable’, the Unions were some of the most damaging – ethically speaking – players in the game.

In effect, the Irish state didn’t just tolerate corruption, it actively managed and encouraged it. Even debating the merits of the form of corruption embodied by Social Partnership shows how instrumental ethics replaces real values when the cancer of corruption metastases. Social Partnership is simultaneously a collusive cartel, a conduit for influence peddling, a vehicle for patronage and a price-fixing mechanism. Its goal is to preserve the status quo of wealth and income distribution, skewed in favour of the Partners.

It should come as no surprise that in 2011, Ireland ranked 19th in the Transparency International Corruption Perception Index (CPI) – the lowest of all small open economies in the Euro Area, bar Estonia and Cyprus. As the Moral Sages of our Left ardently decry market economics, its flagships – New Zealand (ranked 1st in the world), Singapore (5th), Switzerland (8th) and Hong Kong (12th) – are less corrupt than the Social Partnership-governed Ireland. In Political Risk Services International Risk (PRSIR) rankings, Ireland is placed between 26th-31st in the world – alongside Uruguay, the UAE, Botswana, Israel and Malta. The only euro area country that scores below us for overall political risks is Estonia. 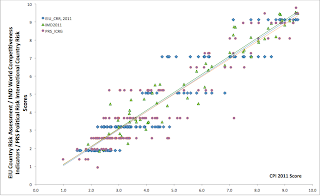 Higher corruption overall is associated with a significantly lower quality of economic institutions. The correlation between the CPI score, the Economist Intelligence Unit Country Risk Assessment score, the IMD World Competitiveness score and the PRSIR score is in excess of 0.9 or, in statistical terms, nearly perfect. This shows the costs we pay for corruption in terms of economic institutions quality.

In 2011, in Ireland, trust in the Government as measured by the Edelman Trust Barometer – another metric of democratic institutions quality that correlates strongly with CPI – stood at 20%, against an average of 52% for the 23 countries surveyed in the report, making Ireland the lowest ranked country in the study. On the back of 2011 elections, the reading rose to 35% in 2012 and remains significantly below the 43% global average. As of today, of all institutions of the society – private and public – the Irish Government has the lowest trust of its people compared to businesses and NGOs, and equivalent to that of the Irish media.

Years of institutionalised corruption, sanctioned by the State and sanctified as Ireland’s panacea for industrial conflict and policy stalemate – Social Partnership – have definitely come home to roost.

Posted by TrueEconomics at 8:27 AM

Hopefully the recent economic cataclysm will put paid to the worst excesses of this activity, but suspect a whole generation will have to pass before some deeply ingrained practices wither away.

Price fixing is illegal unless it is part of a JLC or social partnership agreement.

Enda Kenny tells us we need to get more competitive while allowing state costs to spiral out of control.

Teenagers discuss what country they will emigrate to while the 20% of teachers in schools who are not up to the job cruise on with union protection.

The voluntary retirement scheme has resulted in those most able jumping ship leaving many who are least capable.

Sovereign Debts are rolled up into the future by grey heads with guaranteed pensions knowing that their position in the pyramid is secure and seeing nothing immoral in the "hospital pass" they are presenting to our children.

This is social partnership....