In previous posts I have covered new data on Manufacturing PMI and Services PMI. In this post, I will look closer at Employment sub-indices by these two broad sectors.

As before, all original data is courtesy of NCB, with analysis provided by myself. Some of the indices reported are derived by me on the basis of proprietary models and are labeled/identified as such. 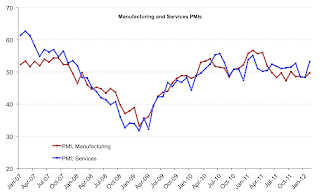 Chart above shows core PMIs for Services and Manufacturing, highlighting the following changes:


The chart below summarizes Employment sub-indices for Services and Manufacturing PMIs: 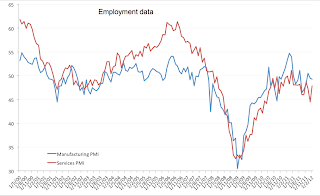 Charts below clearly show that our 'exports-led' recovery is not creating jobs and is instead associated with overall net jobs destruction continuing to rage across the economy. 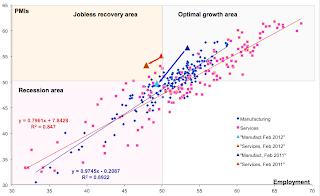 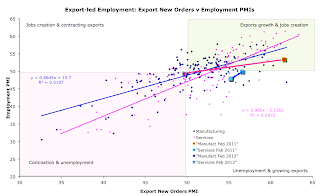 So what is going on? we can only speculate, but in my view,


Reasons why our Services PMI growth is not translating into jobs creation are:
(1) much of growth is due to transfer pricing via IFSC & likes,
(2) Maj of services exports are not labour intensive (hours worked) but skills intensive (high-end skills generating high value added),
(3) Domestic services continue to shrink (retail etc),
(4) Profit margins are very severely strained - so profitability has ben shrinking since end of 2007 every month, implying cuts in employment to raise productivity,
(5) Many of jobs in services exports are NOT employing domestic workers as lack of skills drives these jobs into international markets. And these are the growth areas, while domestic employment sectors are shrinking.


Incidentally, this is not new.


Since the beginning of data series, in Manufacturing, we had 33 months characterized by rising unemployment and rising exports (exports-led jobless recovery) against 43 months of jobs-creating exports-led growth. So there is a 43.4% chance that any recovery in Irish manufacturing will be jobless. This chance is much higher during the current crisis, with 20 monthly episodes of jobless recovery against just 8 jobs-creating recovery episodes.


Similarly, in Services, since the beginning of the data history, we had 31 episodes of jobless recoveries against 32 episodes of jobs-creating exports growth. So probability of 49.2% is associated with seeing jobless recovery if a recovery is exports-driven. Since the beginning of this crisis, there were 26 jobless exports-growth episodes against only 1 month when jobs growth coincided with exports growth.


The above, of course, show exactly how fallacious it is to anticipate exports growth to translate into jobs recovery.
Posted by TrueEconomics at 3:55 PM