An unedited version of my Sunday Times article from March 11, 2012.


This week, NCB along with Markit released the set of Purchasing Managers’ Indices (PMI) for the Irish economy, covering both Manufacturing and Services sectors. These indices are the best, albeit imperfect, leading indicator for growth, exports, corporate profits and employment in this economy and the picture they are presenting is that of continued weakness in Q1 2012 on the foot of deterioration recorded in Q4 2011. A picture that further confirms my earlier observation that Irish economy has entered a period of heightened volatility along a flat-line trend of near-zero growth.

Overall, headline reading for Manufacturing PMI shows that February activity in the sector remained broadly stable. The index of 49.7 was not significantly different from 50 – the level that marks zero growth. This marked the fourth consecutive month of below 50 index results, consistent with a shallow contraction in the sector. In contrast, Services sector index rose in February to a growth-signaling 53.3. This marked the break with previous two months when the index readings were below 50. With 6 months moving average at 50.9, the surveys of purchasing managers suggest that Services are, broadly speaking, on a flat growth trend.

The core drivers for the two sectors’ performance have been changing in recent months.

In Manufacturing, new orders that generally lagged growth in new exports since November 2011 are now the main driver of activity to the upside. New exports have fallen into contraction territory in February for the first time in three months, while overall new business posted flat performance for the first time after three months of declines. This signals that consumer goods producers, rather than MNCs-led goods exporters, drove the overall change in the sector activity. In longer-term trends, new orders are still signaling contraction at 48.3 and new export orders are stagnant at 50.0 on average over the last six months. It appears that our exports-led recovery has run out of steam in Manufacturing – having posted shallow expansion over the last 12 months, as exports growth fell to zero since September 2011 and new orders have been on the declining trend since June 2011.

In contrast, Services show continued exports-driven growth. Thus, new business orders came in at a relatively positive 53.5 in February underpinned by faster growth in new exports at 55.2. Although weak performance of the new business activity in the sector was present in virtually all months since March 2011, this February indicator was the strongest in seventeen months. Overall, new exports posted on average modest growth at 52.5 in 12 months through February 2012 a slowdown on 53.4 average recorded over the last 2 years.

All of this suggests no uptick in the overall economic growth as measured by GDP and GNP in Q1 2012. More critically, the data signals potential deterioration in the underlying external trade balance for Ireland. The reasons for this are two-fold. On the one hand, slower activity in Manufacturing has resulted in slowdown of inputs purchases in previous months, meaning that firms have been exhausting their stocks of inputs into production. This, in turn, sustained suppressed levels of imports over the last ten months that contributed positively to overall trade surplus and our GDP in the past. Going forward, either imports must accelerate to support exporting activity or exports must drop, which is likely to show up in the national accounts as a negative for GDP.

On the other hand, continued collapse in profit margins in both sectors will put pressure on value added in the economy, further undermining any growth momentum we might have. Contrary to the reports from the CSO, which uses aggregated data skewed by larger firms’ and multinationals’ earnings, both manufacturing and services PMIs have been showing sustained decreases in profit margins over much of the crisis.

Thus, input costs inflation in Manufacturing accelerated in February to the highest levels since June 2011, driven by higher raw materials and energy costs, compounded by a weaker euro. We are now in a third consecutive month of rising costs in Manufacturing. In fact, last time trends showed a decline in inputs costs was in December 2009. At the same time, producers continued to cut their gate prices in February for the seventh month in a row. In the last 12 months, average index reading for input costs inflation stood at a massive 61.9 against output prices being close to flat at 50.9. Much the same is taking place in Services sector, where inputs costs remain on inflationary path since December 2010 and output charges have been showing uninterrupted deflation since August 2008.

In contrast with the latest QNHS results for Q4 2011, the PMI data shows tightening, not easing conditions for jobs creation and employment in both sectors of the Irish economy. In Manufacturing, February marked a 46th consecutive month of falling inventories and in Services, with exception of just one month, this trend prevails for all periods since August 2007. This implies that both sectors continue to run spare productive capacity and are basically holding out on significant cuts in production and employment only in a hope of a turnaround in some near-term future.

In contrast with PMI data, this week’s QNHS data showed quarter-on-quarter seasonally adjusted rise in employment by 10,000 with increases in seasonally-adjusted employment taking place across a number of sectors such as Industry, Accommodation and food service activities, ICT, Financial, insurance and real estate activities, Public Administration, and Human health and social work activities.

Alas, more comprehensive reading of the CSO data shows that the headline 10,000 figure was driven by a number of factors completely unrelated to actual jobs creation.

Real employment in Q4 2011 relative to Q3 2011 was up not by 10,000, but by 2,300, with full-time employment falling by 700 and part-time employment rising by 3,000. Which suggests that seasonal adjustments made to the data could have been impacted by significant changes in employment since the beginning of the crisis and not by actual jobs creation. Critically, the number of part-time workers who consider themselves not to be underemployed fell 2,800, while the number of part-time workers who reported being underemployed rose 5,800. Year-on-year changes clearly show that overall employment remains on a decline and the only growth category of workers since Q1 2011 is that of underemployed part-timers.

The above suggests that most, if not all, of the new jobs showing up in the seasonally-adjusted data represent additions arising from the JobBridge training initiative and reflect the effects of past employment contractions on seasonal adjustment. This is further reinforced by age and occupational analysis of the CSO data.

Reinforcing the above conclusions, PMI data for Services has been signalling not a growth, but a contraction in employment over the last 10 months, with February 2012 reading of 47.9. In fact, Services employment has been on a continued uninterrupted decline since March 2008, excluding only one month of increases in April 2011. Manufacturing employment activity has been now declining in five of the last six months, clearly contradicting seasonally adjusted data from QNHS.

Correlations between new exports orders, new orders and employment data from PMIs very clearly show that in January-February 2012 we have moved into a jobless recovery territory in Services, characterized by positive annual growth in exports and declining employment. In Manufacturing, where exporting boom has been now running over 3 years, we are in the jobs destruction and stagnant exports territory for the last two months running. 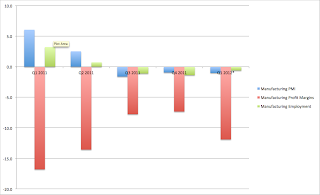 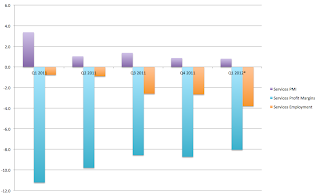 Source: Author own calculations based on NCB and Markit data
* Q1 2012 data is based on January-February averages
Note: In charts, negative values show contraction in activity, positive values signal expansion

In recent weeks we have seen some significant disagreements emerging within the Troika. Whilst the ECB remains silent on the issue of sustainability of Irish Government debts, the IMF appears to believe that we should be allowed to restructure at least some of our banking sector liabilities. The EU Commission in its March 2012 review of Ireland’s participation in the bailout programme clearly thinks that further deterioration in our growth conditions and/or renewed credit crunch  “could require additional fiscal tightening later in the year”. This clearly shows that the EU Commission will require Ireland to bring its fiscal performance back in line with the targets set out in the programme by enacting new cuts should any deterioration materialise. However, the IMF review of Ireland’s participation in the programme, released at the very same time as that by the EU, states that should growth slowdown lead to Ireland jeopardizing its programme commitments on the deficit side this year, the Government can let the targets slip this time around, “to avoid jeopardizing the fragile economic recovery as envisaged under the program.” You know something is amiss within the Troika, when the IMF starts cautioning its overzealous partners not to derail recovery for the sake of sticking to fiscal targets.

Posted by TrueEconomics at 7:45 PM