This is an unedited version of my column in October-November issue of the Village Magazine.


Over the last two decades, Irish economic growth has been primarily driven by a series of financial and investment bubbles. Each one was fuelled by the ad hoc nature of our policymakers’ responses to shifts in global economic trends and their penchant for fetishizing foreign policies fads.

In the mid-1990s, on foot of the US-led dot.com industry explosion, Ireland became the focal point of the investment bubble that saw the state policies and funds inflating the already out-of-touch valuations of the companies. Promising to plug our economy into the Internet of Things, entities from Baltimore Technologies to MediaLab Europe, and everyone in-between, were hovering public and private funds in a race to leapfrog this sleepy island into the 21st century.

In the 2001, at the onset of dot.com hangover, government investment became the new rage. Social Partners climbed over each other to get funding for awe-inspiring schemes usually described as Global Centres for Excellence. This bubble too was based on fads that came to Ireland from abroad, namely from Brussels. To continue fund our fetishes for spending cash we built bungalows at an ever-increasing pace. From 2001 on, Irish economy became an economy built on breezeblocks.

With the bust and the ensuing Great Recession, one could have hoped for a mature review of the policies past and a shift away from our dreamt up grandiose plans. Yet, to-date, the entire response of the two successive Governments to the bust was to feed our hopium addiction. Budget 2009 announcements made amidst the ongoing implosion of the domestic economy promoted aggressively the concept of the Knowledge Economy as our salvation. Truth be told, the Innovation Island is a Potemkin Village.


To see this, one needs to look no further than at our ability to create the base on which a knowledge-intensive economy is built: the human capital.

In my recent speech at TEDx Dublin, I offered a systemic template for assessing any economy’s human capital potential. That system is called C.A.R.E. as it assesses how well a country can Create, Attract, Retain and Enable its workforce’s technical and social skills, talents, creativity, capacity to innovate, engage in entrepreneurship, willingness and ability to take risks. In the nutshell C.A.R.E. is about systems that should put human beings and their abilities at the centre of our society and economy.

Across the entire spectrum of C.A.R.E. systems, education plays a pivotal role. And it is exactly here that many of our policy gaps become painfully apparent.


Let’s take some of these claims in detail, omitting many considerations for the lack of space.

Since the Finance Act 2004, Irish governments have been working on expanding indigenous R&D activities. Over the last ten years, billions of euros were poured into the tax credits and investment supports. Billions more went to fund higher education institutions’ efforts to sustain research and innovation.

While some third level institutions – namely the top four or five universities – have produced tangible results in driving research output up, the rest remained far behind. Even tope universities have shown weak performance.

The 2013 Academic Ranking of World Universities (ARWU) lists only three universities for Ireland, with best performer, TCD ranked in 201-300th place in the world. UCD and UCC rank in 301-400th places. On that, Ireland’s presence in top 500 universities as ranked by ARWU runs dry.

Absurd centralization of education and research policies, coupled with budgetary pressures, centralized and politicized research and teaching funding allocations have accelerate the rate of brain drain from top Irish academic institutions in recent years. This, in part, is the driver for poor ranking performance over the recent years. However, even in 2005-2007, with cash abundant, Irish universities performance was far from stellar.

Meanwhile, across the rest of the higher education sector, both teaching and research remained stuck somewhere in the antediluvian age.

Instead of development of modern, research-capable and skills-based adjunct and clinical faculties, majority of our degrees programmes continue to operate on the basis of full-time faculty teaching out of a textbook and into a pre-set, standardized exam. Furthermore, programmes are often staffed with faculty members who are neither research active, nor have any appreciable experience in applied work relating to their teaching.

While top universities around the world are aggressively moving to new teaching platforms and broadening their programmes by erasing the boundaries between various degrees, in Ireland we still treat a slide projector as a technological enabler. Web-based apps, audio-visual tools, data visualisation and other core tech supports are virtually unheard of in even top-ranked Irish universities.

In many university classrooms, students are more technologically enabled than their lecturers.

Absent deployment of modern strategies and technologies, Ireland embraced the three-year degree system. If anything, lack of proper progression in developing teaching skills and tools should have led to a lengthening of the degree programme to maintain fixed quality of the graduates. Instead we opted to trade down the learning curve in pursuit of higher put-through numbers.

All of this stands contrasted by the fact that in our flagship universities there are some individual teaching and research programmes which operate at a world-class level. Irish academia, it appears, can do excellence, just not across the whole system.


On the research side, things are not stacking up in favour of our education being the enabler of Knowledge Ireland either. New Morning IP, the intellectual capital consultancy firm, publishes regular data on patenting activity by indigenous Irish companies, foreign inventors and Irish academic institutions.

Not surprisingly, the European Patent Office data for 2012 put Ireland in 26th place in terms of total number of patent applications and in per-capita indigenous innovation terms, right between such powerhouses of the ‘knowledge economy’ like New Zealand and Cyprus.

The above data correlates with the poor performance by the country academic institutions in attracting private sector research funding. In August, a study by the Times Higher Education, ranked Ireland at the bottom of global league table in terms of private sector funding per academic researcher. Lower rankings for Ireland can be in part explained by poor innovation uptake by many domestic enterprises. However, these rankings also show that our system of higher education is inefficient in producing market-relevant research. Given the importance of such research to teaching and training future cohorts of human capital-rich workers, this is not a good thing.

At the top, we need more flexible, more responsive public policy formation capable of supporting knowledge-intensive, skills-rich and rapidly evolving education. Fields of research and teaching, such as biotech, stem cells research, content-based ICT, remote medicine, human interface technology, customizable design and development technologies and so on all require a mix of skills we currently struggle to provide. Outside these, the world of business and the overall socio-economic make up is changing rapidly. In previous decades, generic management degrees offered a good starting point for on-the-job-learning. Today we need both specialist knowledge and general human capital as the basis for entering management areas of work. In the past, specialism was the differentiator into growth areas in the economy. Today, encyclopedism and ability to cross boundaries of defined degrees is increasingly a valued skill.

Policy level changes require introducing accountability and direct incentives into education system. Introduction of university-set fees are the starting point for this. Yet, even more institutional autonomy will be required to move to a system of higher education where both success and failure are reflected in actual outcomes. Successful institutions should be incentivised to thrive. Poorly functioning ones should be forced to shut down or be acquired by successful ones. Public funding should follow quality of teaching and research, not political considerations of which constituency is next in line for grants.

We must end political remit over the system of academic research and higher education. The best way to do so is by allowing more competition, imposing tighter quality controls and allowing institutions more freedom to price their offers reflective of both demand for and supply of quality. 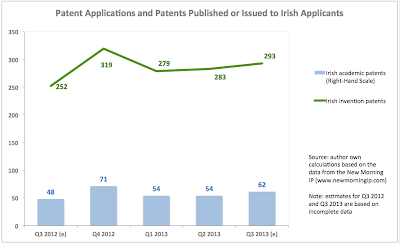 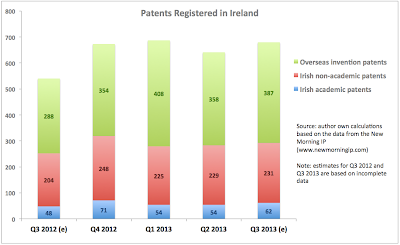 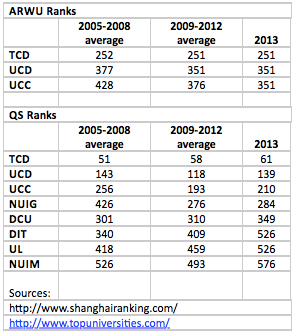 Posted by TrueEconomics at 7:29 AM