Now, let's take a look at 3-quarters aggregates. The reason why looking at 3 quarters aggregates makes sense is that q/q changes are volatile, while y/y changes are only reflective of quarter-wide movements in activity. 9-months January-September 2013 data comparatives to a year ago provide a better visibility as to what has been happening in the economy so far during this year.

All analysis below is based on seasonally unadjusted data in constant prices terms.

(1)-(4) subtracted from GDP growth, (5) and (6) added to GDP growth. Which means that the only two positive contributions to growth in our GDP came from: imports decline and stocks of goods held by businesses rise. This is hardly a good news, as both sources of growth are really not about increased/improved activity in the economy.

Let me know if you are spotting any positive growth in the above.

Next, the difference between GDP and GNP is formed by the Net Factor Income from the Rest of the World. This also fell in Q1-Q3 2013 compared to the same period of 2012 - down 14.37% y/y (or -EUR3,378 million), which 'contributed' a positive swing to the GNP in the amount of almost EUR3.38 billion. The reason for this? Well, growth-generating fall-off in activity in the phrama sector meant that MNCs were booking lower profits via Ireland and this, allegedly, has a positive effect on our economy… err… on our GNP.

GNP, propelled by stocks accounting tricks, hocus-pocus of transfer pricing and continued decline in imports rose 2.69% in Q1-Q3 2013 compared to Q1-Q3 2012 (up EUR2,670 million = decline in GDP of -EUR706million plus decline in factor payments of +EUR3,378 million). Seriously, folks, this is beginning to look like a joke!

Based on the same physics of transfer pricing miracles, Irish GNP is now 4.16% ahead of Q1-Q3 reading for 2011.

Recap: On expenditure side of the National Accounts, growth in 2013 is not exactly real (for GNP) and not present (for GDP).

Analysis of Total Domestic Demand (aka domestic economy) is to follow. Before then, charts to illustrate the above: 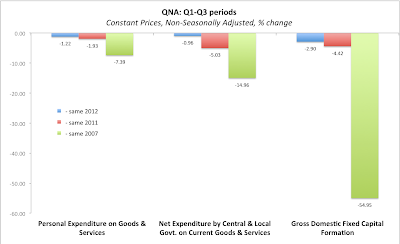 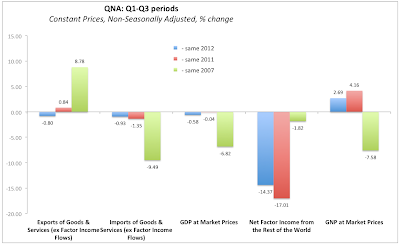 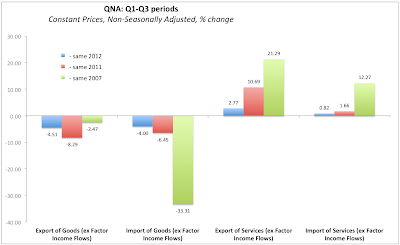 Posted by TrueEconomics at 12:58 PM