This is an unedited version of my Sunday Times column from December 22, 2013.


It is a well-known fact that virtually all New Year’s resolutions are based on the commitments adopted and promptly abandoned in the years past. Our Government’s reforms wish lists are no exception. Like an out-of-shape beer guzzler struggling to get out of the pub, our State longs to get fit year after year. Most of the time, nothing comes of it: bombastic reforms announced or committed to quietly slip into oblivion. Smaller parts of resolutions take hold; bigger items get buried in working groups and advisory panels. Thus, over the last decade, we have seen promises of reforms across the domestic sectors, protected professions, pensions and health systems, quangos, social welfare, government funding, tax systems, and so on. Virtually none have been delivered so far.

This week’s Strategy for Growth: 2014-2020 is the latest in the series of Governments’ ‘New Year, New Me’ resolutions. It is a lengthy list of things that have already been promised before. With a sprinkling of fresh thinking added. All of it is based on a strange mixture of pragmatism in fiscal targets, resting on economic forecasts infused with an unfunded but modest optimism. Giddy exuberance in confidence concludes the arrangement: confidence that the reforms which proved un-surmountable under the Troika gaze will be feasible in over the next seven years. The entire exercise promises a lot of reforms, but delivers little when it comes to realistic costings and risk assessments of the promises made.

In brief, the new Strategy is a disappointingly old fruitcake: pretty on the outside, inedible on the inside and full of stale trimmings, held together by the boisterous dose of potent optimism.


On Monday, the National Competitiveness Council unveiled its own version of a roadmap to the proverbial growth curve. The 32-page document on the New Economy contained no less than 65 references to the building and construction sector and 39 instances of references to property sector. No other sector of the economy was accorded such attention.

In the footsteps of NCC, on Tuesday, the Government launched its own multi-annual post-Troika policies roadmap.

The core point of the glossy tome is that Ireland needs a combination of policies to get its economy moving again. No one could have suspected such a radical thought. Majority of the policies listed are of ‘do more of the same’ variety. Some are novel, and a handful would have been even daring, were it not for the nagging suspicion that they represent political non-starters.


The plan has three pillars. Pillar one: fiscal discipline to keep Government debt under control. Pillar two: repairing the credit supply system and the banks. Pillar three: create an economy based on innovation, productivity and exports, and… building and construction. If you find any of this new, you are probably a visitor from Mars.

The document fails to provide any risk analysis in relation to all three pillars. Instead, it fires off pretty specific and hard-set targets and forecasts. Normally, the forecasts reflect the impact of policies being produced. In the Strategy 2014-2020 normality is an inverted concept, so forecasts enable targets that justify proposals.

For the purpose of comparison, based on IMF model, Irish GDP, adjusting for inflation is forecast to expand by less than 12.3 percent between the end of 2013 and the end of 2018. In contrast, Government latest plan projects GDP to grow by over 16.1 percent in the case of high growth scenario. Nominal GDP differences between the high-growth and baseline scenarios amount to just 0.1 percentage points on average per annum. In other words, the distance between boisterous and wild optimism in Government’s outlook for the next seven years of economic growth is negligible.

By 2020 we will regain jobs lost during the crisis. But unemployment will be 8.1 percent under the baseline scenario and 5.9 percent under high-growth projections. Both targets are above the pre-crisis levels of around 4.7 percent. Which means that the Grand Strategy envisions jobs creation to lag behind labour force growth. The only way this can be achieved is by lowering employment to labour force ratio. This, in turn, would require increasing labour force more than increasing employment. In other words, the numbers stack up only if we simultaneously reduce emigration and push people off welfare benefits and into the jobs markets, and do so at the rates in excess of the new jobs creation. How this can be delivered is a mystery, although the Strategy promises more reforms to address these.

To make these achievements feasible, let alone sustainable, will require drastic reforms far beyond what is detailed in the strategy documents. Instead of detailing these, Strategy for Growth: 2014-2020 leaves the major reforms open to future policy designs by various working groups.

For example, the Government Strategy talks high about the need to ensure sustainability of pensions provision. In an Orwelian language of the Strategy, having expropriated private pension funds before, the Government is now congratulating itself on achieving positive enhancements of the pensions system.

Yet, we all know that the key problems with current pensions system in Ireland are two-fold. One: we have massive under-supply of defined contribution pensions plans in the private sector. Two: we have massive deficits in defined benefit schemes that are predominantly concentrated in the public sectors. The Strategy documents published this week simply ignore the former problem. With respect to the latter one, the Government plan amounts to hoping that the problem will go away over time. Overall, going forward, the magic bullets in the State dealing with the vast pensions crisis are exactly the same as before: higher retirement age, gradual closing of defined benefit schemes and more studies into “setting out … long-term plans in this area”.

Another complex of Augean Stables of economic policies left untouched, potentially due to the influence of Labour is the tax system. Current income and social security taxes de facto penalise anyone considering an entrepreneurial venture. The Strategy puts forward no income tax reforms proposals. The document brags about the ‘progressivity’ of our income tax system and promises to retain this feature of the tax codes. Unions will be happy. Entrepreneurs, self-employed, higher-skilled workers, innovators, professionals, younger and highly educated employees, and exporting sectors workers will remain unhappy.

The Strategy admits that “Traditionally in Ireland starting and growing a business is considered less attractive by many than working in larger employers.” It goes on to stake a bold policy claim “to find innovative ways to encourage an entrepreneurial spirit.”

Stripped of fancy verbiage, the ‘innovative ways’ amount to a call to educate us all, toddlers and pensioners alike, about the goodness of entrepreneurship, and develop unspecified policies to make business failure more acceptable. Given the shambolic nature of the personal insolvency regime reforms designed by the current Government, there is little hope the latter objective can be met.

For intellectual gravitas, key marketing and PR words were deployed in the Strategy, promising more assistance, subsidies and supports to entrepreneurs, and more “clusters”. The same Strategy also promised to cut the number of business innovation assistance schemes and streamline business development programmes.

Taken together, these changes suggest that the Irish entrepreneurship environment will remain firmly gripped by State bureaucracy and will continue churning out state-favoured enterprises with clientilist business models. The fact that the said platform of enterprise supports, having been in existence for some 12 years, has failed to deliver rapid growth of innovation-focused high value-added indigenous entrepreneurship to-date seems not to bother our policymakers.

Other elephants in the room – some spotted by the very same Government years ago, while in opposition – are mentioned and, predictably, left unchallenged. One example: the Strategy promises yet another Action Plan to “identify ways to use Government procurement in a strategic way to stimulate … innovative solutions.” Back in 2011, this Government has already promised to do the same.

Overall, the fruitcakes of economic policy planning by the Government and NCC both lack vision and details. The two documents do contain some good, realistic and tangible ideas, but, sadly, these are buried beneath an avalanche of unspecified promises and uncontested figures. Risks to implementation of these policies may outweigh incentives for reforms. Lack of realism in expectations may overshadow the potential impact of the proposals. 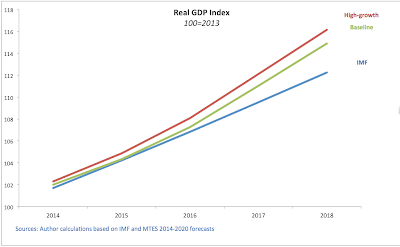 In the latest report published this week, the European Banking Authority (EBA) analysed data from 64 banks with respect to their capital positions and the underlying Risk-Weighted Assets (RWA) holdings. Overall, capital position of the EU banking sector “continued to show a positive trend,” according to EBA, with Core Tier 1 capital holdings rising by EUR 80 billion. This, “combined with a reduction of more the EUR 800 billion of RWAs” means that the EU banks are building up risk buffers at the same time as pursuing continued deleveraging. The latter is the price for the former: higher capital ratios are good for banks’ ability to withstand shocks, deleveraging of assets is bad for credit supply to the real economy. On the net, however, as capital ratios rise, the system is being repaired so the price is worth paying. The improvements, however, were absent in one economy. Per EBA, Irish banks (Bank of Ireland, AIB and Permanent TSB) are unique in the EU in so far as they are experiencing simultaneous reduction in capital ratios and a decrease in Risk-Weighted Assets, which only partially offset the drop in capital. Put simply, Irish banks deleveraging is not fast enough to sustain current capital ratios: we are paying the price, but are not getting the benefits. 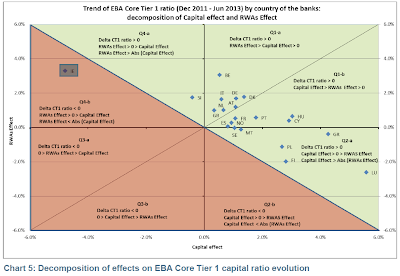