Quarterly National Accounts for Ireland were relaxed today by the CSO. The headline numbers are good: 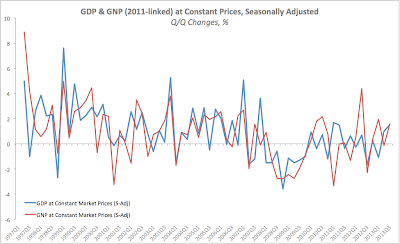 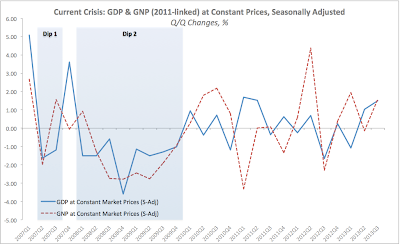 For not seasonally-adjusted series (allowing for y/y comparatives), constant prices data:
1) GDP expanded 1.74% y/y in Q3 2013, posting significant improvement on -1.64% y/y contraction recorded in Q2 2013.
2) GNP also posted solid rise, beating increases in GDP. GNP was up 3.87% y/y in Q3 2013 and this is a massive jump on -0.69% contraction recorded in Q2 2013.
3) Q3 2013 marks the first quarter when growth in GDP (q/q terms, seasonally adjusted, constant prices) posted second consecutive quarter growth since Q1-Q2 2011. This is welcome, as the GDP series have been exceptionally unstable in recent years: since Q1 2010 through Q3 2013, there were only two episodes of GDP quarterly growth being consecutively above zero for two quarters period.

In y/y terms, GDP finally broke a string of contractions that lasted 4 consecutive quarters between Q3 2012 and Q2 2013. 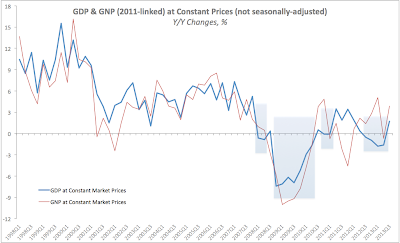 It is also worth noting that GNP expansion was fuelled by decline in MNCs transfers of profits abroad. This is most likely due to a decline in pharma sector profits on foot of patent cliff and, possibly, due to some 'parking' of profits on the side of other MNCs. Retained earnings reflected in the Financial Account of the Balance of Payments rose EUR6.27 billion in Q3 2013.

Two core points, however, so far continued as a trend in the data is that we are still witnessing erratic pattern in growth. The recovery is not convincing, yet, when it comes to trend, but there are some positive signs emerging. These are to be explored in the subsequent posts when I deal with composition of growth sources.

On the net, rebound is encouraging and coupled with expectation for growth in Q4 2013, we might be able to pull off a positive expansion for the year.
Posted by TrueEconomics at 10:23 PM