This is an unedited version of my Sunday Times column from December 1, 2013.


According to Shutterfly CEO and veteran entrepreneur, Jeff Housenbold, “Entrepreneurship is a state of mind”.

While measuring the extent and quality of entrepreneurship in any economy is a tricky task, Ireland is an economy with two conflicting states of mind when it comes to start-ups. On the one hand, we have the official story of an entrepreneurship-rich nation. On the other hand, there is the hard data painting a more complex picture.

To put it simply, the Monitor data reveals the vast chasm between the media and political cultures promoting Ireland as an entrepreneurship haven, and the realities of running and growing a real start-up venture here.

This chasm was back in the spotlight over the last two weeks.

Last week, the Wall Street Journal published the results of a study that put Ireland in the first place in Europe in terms of venture capital raised in the tech sector over the period from Q1 2003 through Q3 2013. All in, Ireland-based tech start-ups and SMEs raised some USD278.73 per capita on average. This compared to the USD68.39 raised across the European Free Trade Association (EFTA) group of 32 states. Impressive as the number for Ireland was, it still falls short of the US figure of USD660.41 and Israel’s USD1,092.52.

Much of Irish media reported the results as being indicative of Ireland’s high success in entrepreneurship. Alas, the study simply does not support such a conclusion for three reasons. Firstly, the data covers only Venture Capital funding extended to tech sector firms. As the result, it excludes the vast majority of start-ups in the economy that are either operating outside the tech sector, or raising funding through channels other than VCs, or both. Currently, VCs-funded companies in Ireland employ around 9,000 people. This a drop in a bucket, given that there are 84,700 self-employed people with paid employees (just one group of entrepreneurs) in the country. The study also covers deals involving already established firms. Lastly, the study suggests that the banking crisis, resulting in the complete drying up of new lending, could have contributed to increased demand for VC funds.

No one in the mainstream media noticed that less than two months ago, in its submission for Budget 2014, Irish Venture Capital Association (IVCA) said that “the shortage of entrepreneurs [in Ireland] has reached crisis levels”. Per IVCA, in 2011 only “8.5 percent of people in Ireland aspired to be an entrepreneur, down from a high of 12.5 percent in 2005.” The EU average in 2011 was 15.3 percent.

And no one bothered to cross check the results of the Wall Street Journal study with actual data on new enterprise creation in Ireland. According to the latest data from the World Bank, Ireland ranks seventh in the EFTA in the scope of entrepreneurship in overall economy. World Bank groups Ireland alongside with Russia, Romania, Hungary, Slovak Republic and Lithuania in terms of the rates of new enterprise formation.


All of this suggests that we have significant road to travel before Ireland becomes a powerhouse of entrepreneurship. The good news is – there are plenty of reforms that can help us on the way.

Last week, the US-based Kauffman Foundation, the largest research centre in the world for studies of entrepreneurship, published the results of its annual Global Entrepreneurship Week survey. The study reveals the snapshot of the state of play in entrepreneurship and start-ups formation across 113 nations and 2,330 current entrepreneurs. Amongst the handful of nations that did not participate was the entrepreneurial haven of Ireland.
Nonetheless, coupled with other sources of data, the Kauffman study offers us some good insights into the role of policy and regulatory environments in supporting entrepreneurship. Many of these insights overlap with what we observe in Ireland.

One of the keys to creating an environment supportive of entrepreneurship is to incentivise equity-based investment. Instead, we have an environment that favours debt. The problem with over-reliance on debt to finance corporate investment is that it has been shown worldwide to stymie the rate of growth in firms. It also lowers the speed of transition from family ownership to professional management.

Ireland lags behind core competitors in terms of banking sector culture when it comes to funding entrepreneurs. This is a function of two factors: low lending capacity in the system that is currently undergoing deleveraging of bad loans, and the long-term historical legacy of lending against physical collateral. We can do something about both, if we get creative. A gradual improvement in lending capacity by the banks can be achieved by reducing risk profile of SME loans. For example, a co-insurance scheme for viable new and existing loans using Enterprise Ireland funds can work to free some of the better quality business loans for securitisation. Co-insured loans can have an equity conversion component for added security. Such enhancements of better loans can help start the process where the banks lend against market and product potential of the specific SMEs instead of lending against physical collateral.

Another area that is commonly identified as a strong support for entrepreneurship is cost of and access to advisory services, starting with accounting and legal services and extending into technological advice and strategy. Ireland has achieved some improvements in the accounting costs area, but is lagging in terms of legal costs competitiveness. Critically, however, there are too few private advice networks available to would-be entrepreneurs. And there are too many state-run ones, often with limited expertise and excessively costly bureaucracy.

We need a more active system of business development and incubation centres not only for start-ups in strategic sectors, such as ICT, bio, and food, but also in domestically-trading ones. Such centres can co-locate with major MNCs and / or be a part of broader business networks. However, the key point is resourcing them. Consolidating and re-configuring currently operating systems of local enterprise boards, FAS, and numerous other quangos crowding this space can help.

Tax systems need to be reformed to support not only creation of business, but transition into entrepreneurship. Currently, transition to entrepreneurship is only made more onerous by the absurd system of USC and PRSI taxation. To do better we need to increase VAT applicability threshold to EUR80,000-100,000 of earnings for self-employed, and dramatically reduce USC and PRSI on self-employed and sole traders.
The problem of tax disincentives for knowledge and skills-intensive start-ups is solely down to ridiculously high upper marginal tax rate on income. Per IVCA Budget 2014 submission: “The effect of [high marginal tax rates] is that Ireland is becoming a “development ghetto” with high growth start-ups doing development here but building other functions e.g. sales and marketing elsewhere.”

An income tax incentive in the form of applying only the lower marginal tax rate on earnings generated in the first three years of self-employment can rectify this problem. It will also align taxation treatment of corporate entities with that of the sole traders.


Beyond this, employees share ownership taxation needs to be revised. In fact, we can be even more aggressive here by setting a CGT exemption or a reduced rate for all companies that facilitate creation of new enterprises. This will send a strong message to foreign investors that cooperative entrepreneurship with indigenous start-ups is encouraged here. Given that many Ireland-based MNCs are actively developing partnerships involving start-ups around the world, an aggressive tax policy stance in this area can even act as an added incentive for MNCs to invest more in Ireland.
In short, there is plenty of room for improvement and innovation in terms of national policies on entrepreneurship. This should be treated as a major opportunity for Ireland, a chance expand and strengthen our indigenous enterprise formation. If entrepreneurship is really a state of mind, policy and support institutions to foster entrepreneurial culture are a matter of will. Having the former without the latter is simply not enough. 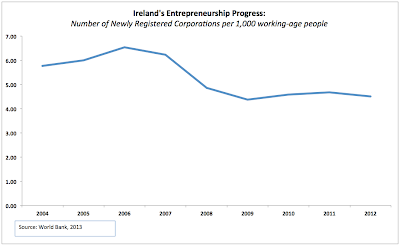 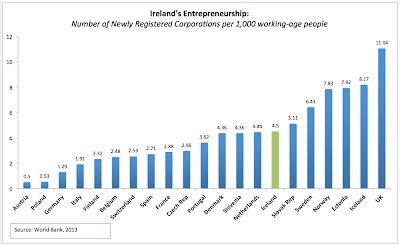 A recent report from the McKinsey Global Institute examined the distribution of economic costs and benefits arising from the set of unprecedented monetary policies in the advanced economies. The study found that from 2007 to 2012, quantitative easing measures deployed in the euro area, the UK, and the US yielded a net benefited of USD1.6 trillion to the Government sector. These benefits were generated through reduced debt-service costs and increased profits remitted from central banks. Even euro area peripheral states’ governments have gained from these measures by facing lower costs of funding their crisis responses and by channeling funds from the banks to the Exchequer via Central Banks. At the same time, larger non-financial corporations gained some USD710 billion due to lower interest rates on debt. The only sector of the economy that was an unambiguous loser in this game of monetary policy chairs were the households. Households in the US, the UK and the euro area lost USD630 billion in net interest income. The costs were mostly concentrated amongst older households that tend to hold more interest-bearing assets. The study excluded the adverse effects on households that arise from increased taxation, reduced public services and benefits, and from higher bank loans margins.

Posted by TrueEconomics at 7:35 AM