This is an unedited version of my Sunday Times column from December 15, 2013.


Over the last week, domestic news horizon was flooded by the warm sunshine of Ireland's exit from the Bailout. And, given the rest of the Euro area periphery performance to-date, the kindness of strangers was deserved.
Spain is also exiting a bailout, and the country is out of the recession, officially, like us. But it took a much smaller, banks-only, assistance package. And, being a ‘bad boy’ in the proverbial classroom, it talked back at the Troika and played some populist tunes of defiance. Portugal is out of the official recession, but the country is scheduled to exit its bailout only in mid-2014, having gone into it after Ireland. No glory for those coming second. Greece and Cyprus are at the bottom of the Depression canyon, with little change to their misery.

In short, Ireland deserves a pat on the back for not being the worst basket case of the already rotten lot. And for not rocking the boat. Irish Government talks tough at home, but it is largely clawless vis-à-vis the Troika. Our only moments of defiance in dealing with the bailout came whenever we were asked to implement reforms threatening powerful domestic interests, such as protected sectors and professions.

However, with all the celebratory speeches and toasts around, two matters are worth considering within the broader context of this week's events. The first one is the road travelled. The second is the road that awaits us ahead. Both will shape the risks we are likely to face in the medium-term future.


The road that led us to this week's events was an arduous one. Pressured by the twin and interconnected crises - the implosion of our banking sector and the collapse of our domestic economy - we fell into the bailout having burnt through tens of billions of State reserves and having exhausted our borrowing capacity. The crater left behind by the collapsing economy was deep: from 2008 through today, Irish GDP per capita shrunk 16.7 percent, making our recession second deepest in the euro area after Greece. This collapse would have been more benign were it not for the banking crisis. In the context of us exiting the bailout, the lesson to be learned is that the twin banking and growth crises require more resources than even a fiscally healthy state can afford. Today, unlike in 2008, we have no spare resources left to deal with the risk of the adverse twin growth and banking shocks.

Yet, forward outlook for Ireland suggests that such shocks are receding, but remain material.

Our economic recovery is still fragile and subject to adverse risks present domestically and abroad. On domestic side, growth in consumer demand and private investment is lacking. Deleveraging of households and businesses is still ongoing. Constrained credit supply is yet to be addressed. This process can take years, as the banks face shallower demand for loans from lower risk borrowers and sharply higher demand for loans from risky businesses. On top of this, banks are deleveraging their own balance sheets. In general, Irish companies are more dependent on banks credit than their euro area competitors. Absent credit growth, there will be no sustained growth in this economy. Meanwhile, structural reforms are years away from yielding tangible benefits. This is primarily due to the fact that we are yet to adopt such reforms, having spent the last five years in continued avoidance of the problems in the state-controlled and protected domestic sectors.

On the Government side, Budgets 2015 and 2016 will likely require additional, new revenue and cost containment measures. Post 2016, we will face the dilemma of compensating for the unwinding of the Haddington Road Agreement on wages inflation moderation in the public sector and hiring freezes.
To-date, Irish economy was kept afloat by the externally trading services exporters, or put in more simple terms - web-based multinationals. Manufacturing exports are now shrinking, although much of this shrinkage is driven by one sector: pharmaceuticals.

Meanwhile, the banking sector is still carrying big risks. Heavy problems of non-performing loans on legacy mortgages side, unsecured household credit and non-financial corporates are not about to disappear overnight. Even if banks comply with the Central Bank targets on mortgages arrears resolution, it will take at least 18-24 months for the full extent of losses to become visible. Working these losses off the balance sheets will take even longer.
Overall, even modest growth rates, set out in the budget and Troika projections for 2014-2018, cannot be taken for granted.


This week, the ongoing saga of the emerging European Banking Union made the twin risks to banks and growth ever-more important. The ECOFIN meetings are tasked with shaping the Bank Recovery and Resolution Directive, or BRRD. These made it clear that Europe is heading for a banking crisis resolution system based on a well-defined sequencing of measures. First, national resources will be used in the case of any banks' failures, including in systemic crises. These resources include: wiping out equity holders, and imposing partial losses on lenders and depositors. Thereafter, national funds can be used to cover the capital shortfalls and liquidity shortages. Only after these resources are exhausted will the EU funds kick in to cover the residual capital shortfalls. This insurance cover will not be in the form of debt-free cash. Instead, the funding is likely to involve lending to the Government and to the banks under a State guarantee.

When you run through the benchmark levels of capital shocks that could qualify a banking system for the euro-wide resolution funding under the BRRD, it becomes pretty clear that the mechanism is toothless. For example, in the case of our own crisis, haircuts on bondholders under the proposed rules could have saved us around EUR15-17 billion. In exchange, these savings would have required bailing in depositors with funds in excess of the state guarantee. It is unlikely that we could have secured any joint EU funding outside the Troika deal. Our debt levels would have been lower, but not because of the help from Europe.

This last point was made very clear to us by this week’s events. After all, our historically unprecedented crisis has now been 'successfully resolved' according to the EFSF statement, and as confirmed by the European and Irish officials. The 2008-2010 meltdown of the Irish financial system was dealt with without the need for the Banking Union or its Single Resolution Mechanism.


Second issue relates to the continued reliance across the euro area banks on government bonds as core asset underpinning the financial system. In brief, during the crisis, euro area banks have accumulated huge exposures to sovereign bonds. This allowed the Governments to dramatically reduce the cost of borrowing: the ECB pushed up bonds prices with lower interest rates and unlimited lending against these bonds as risk-free collateral.

The problem is that, unless the ECB is willing to run these liquidity supply schemes permanently, the free lunch is going to end one day. When this happens, the interest rates will rise. Two things will happen in response: value of the bonds will fall and yields on Government debt will rise. The banks will face declines in their assets values, while simultaneously struggling to replace cheap ECB funding with more expensive market funds.

Given that European Governments must roll over significant amounts of bonds over the next 10 years, these risks can pressure Government interest costs. Simple arithmetic says that a country with 122 percent debt/GDP ratio (call it Ireland) and debt financing cost of 4.1 percent per annum spends around 5 percent of its GDP every year on interest bills, inclusive of rolling over costs. If yield rises by a third, the cost of interest rises to closer to 6.6 percent of GDP. Now, suppose that the Government in this economy collects taxes and other receipts amounting to around 40 percent of GDP. This means that just to cover the increase in its interest bill without raising taxes or cutting spending, the Government will need nominal GDP growth of 3.9 percent per annum. That is the exact rate projected by the IMF for Ireland for 2014-2018. Should we fail to deliver on it, our debts will rise. Should interest rates rise by more than one-third from the current crisis-period lows, our debts will rise.


The point is that the dilemmas of our dysfunctional monetary policy and insufficient banking crisis resolution systems are not academic. Instead they are real. And so are the risks we face at the economy level and in the banking sector. Currently, European financial systems have been redrawn to contain financial exposures within national borders. The key signs of this are diverged bond yields across Europe, and wide interest rates differentials for loans to the real economy. In more simple terms, courtesy of dysfunctional policymaking during the crisis, Irish SMEs today pay higher interest rates on loans compared to, say, German SMEs of similar quality.

Banking Union should be a solution to this problem – re-launching credit flowing across the borders once again. It will not deliver on this as long as there are no fully-funded, secure and transparent plans for debt mutualisation across the European banking sector. 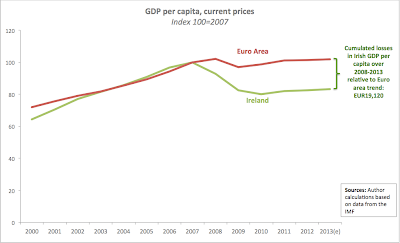 Recent data from the EU Commission shows that in 2011-2012, European institutions enacted 3,861 new business-related laws. Meanwhile, according to the World Bank, average cost of starting a business in Europe runs at EUR 2,285, against EUR 158 in Canada and EUR 664 in the US. Not surprisingly, under the burden of growing regulations and high costs, European rates of entrepreneurship, as measured by the proportion of start up firms in total number of registered companies, is falling year on year. This trend is present in the crisis-hit economies of the periphery and in the likes of Austria, Germany and Finland, who weathered the economic recession relatively well. The density of start-ups is rising in Australia, Canada, the US and across Asia-Pacific and Latin America. In 2014 rankings by the World Bank, the highest ranked euro area country, Finland, occupies 12th place in the world in terms of ease of doing business. Second highest ranked euro area economy is Ireland (15th). This completes the list of advanced euro area economies ranked in top 20 worldwide. Start ups and smaller enterprises play a pivotal role in creating jobs and developing skills base within a modern economy. The EU can do more good in combatting unemployment by addressing the problem of regulatory and cost burdens we impose on entrepreneurs and businesses than by pumping out more subsidies for jobs creation and training schemes.

Posted by TrueEconomics at 1:31 PM