In the previous two posts I covered the IMF analysis of mortgages arrears and budgetary dynamics. Here, let's focus on IMF forward-looking analysis for 2012.

"Given the strong growth in the first half, real GDP growth has been revised up to 1.1 percent
in 2011 from 0.4 percent in the most recent WEO projection. However, nominal GDP would
be essentially flat in 2011 given a projected 1 percent decline in the GDP deflator owing to a
deterioration in the terms of trade." [You can read this as follows: we repay debt out of nominal GDP. Which is flat. Thus our capacity to repay our debts in 2011 remains identical to that in 2010. Another year, and not any closer to the elusive - and utterly unattainable, of course - goal of paying down our total debts.]

"Further deceleration in external trade prevents any growth pick-up in the baseline in 2012. Growth projected for key trading partners—the euro area, the U.S. and the U.K. account for 80 percent of exports—has been revised down from 2 percent at the Third Review to 1½ percent currently (export-weighted). The non-cyclicality of pharmaceutical exports and recent improvements in competitiveness help mitigate the impact of lower demand, nonetheless, projected Irish export growth in 2012 has been revised down from 5¼ percent to 3¾ percent. Domestic demand will continue to contract, leaving GDP growth at 1 percent in 2012, down from 1.9 percent at the previous review. Low growth allows only a small reduction in unemployment in 2012. Inflation would remain low at about 1 percent in 2012, as higher indirect tax rates broadly offset the impact of weaker international price pressures." [So, in a summary: if pharma exports remain as they are - no patent cliff effects etc - we will grow at 1% in 2012, unemployment will decline slightly solely due to exits from the labor force and emigration, and high taxes will hammer domestic demand, thus driving down inflation. Did I hear 'stagnation' said anywhere?]

Importantly, the IMF revised its previous forecasts for 2015 deficit of 2.9% in line with the Government plans. However, debt/GDP ratio remains projected to peak at 118.1% in 2013 and this reflects adjustments for the €3.72bn 'Cardiff error'.

"Debt-to-GDP is projected to peak at 118 percent in 2013, in line with the previous review. The debt path is lowered by a correction to the end-2010 general government debt level and the reduced interest rate on EU loans, but this is offset by lower projections for nominal GDP. Potential privatization receipts could lower debt prospects, while outlays to restructure the credit union sector could raise debt prospects, but such outlays are expected to be manageable. External developments affecting growth and the prospective interest rates on market financing are the key sources of risk to debt sustainability."[The assumption is that projected cost of credit unions losses covers will be €500-1,000mln only.]

But don't worry - Government revenues are going to be very transparent. Per IMF analysis, in effect, the entire revenue adjustment forward will be carried through income taxes: 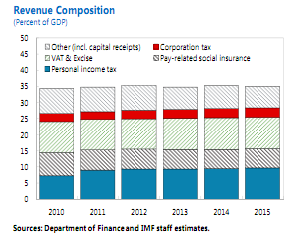 Perhaps a telling thing about the report is that the entire 'growth policies' section of the review is given less space than the reforms of the credit unions. What is given, however, is bizarrely thin on ideas and impact.

Most of the 'measures' referenced reflect focus on Employment Regulation Orders (EROs) or Registered Employment Agreements (REA) review - a measure that is likely to produce some labour cost reductions in the construction sector and perhaps some other labor intensive, lower-wage sectors. However, it is simply naive to believe that labor costs hold back jobs creation in retail, hospitality and construction. Instead, market structure, lack of consumer demand, Nama - for construction, banks credit availability and, above all, devastated personal incomes of those still working (via taxes hits and earnings declines) are the main drivers for lack of jobs creation in these sector. Review of wage setting mechanisms might be a high enough priority, but it is not the highest by any possible means.

Apart from that, IMF Megaminds have nothing else to say about jobs creation.

In the next post, I will focus on the IMF review of risks with respect to fiscal consolidation and growth.


Posted by TrueEconomics at 8:19 PM