ECB Working Paper 1406 (December 2011) titled "The Public Sector Pay Gap in a Selection of Euro Area Countries" looks at the relationship between public and private sector wages over recent decades in the light of "the increase in public sector employment in many countries, with relevant implications for the overall macroeconomic performance and for public finances". The study considered ten euro area countries: Austria, Belgium, France, Germany, Greece, Ireland, Italy, Portugal, Slovenia and Spain.

Per authors: "According to national account aggregate data, the wage earned by a representative public sector employee is higher than the one earned by a representative private sector employee in all the countries of this study, except Belgium, France and Germany. In particular, in the period 1995-2009 the ratio of public to private compensation per employee is found to be consistently below one in the case of France, slightly below one in the cases of Germany and Belgium, around 1.1 for Austria, around 1.2-1.3 for Italy, Spain, Greece, Ireland and Slovenia, and above 1.5 for Portugal."

"Available data on union membership – referring to the period 1997-2009 depending on the country - show that union density (measured by the ratio between reported membership and employed dependent labour force) is typically much higher in the public than in the private sector (in the European countries approximately twice as much). Among the countries included in this study, union density rates are relatively high in Belgium (around 50%), followed by Austria, Ireland, Italy and Portugal (in the 30- 40% range) and Germany (27%); it is relatively low in France (about 8%) and Spain (16%)." 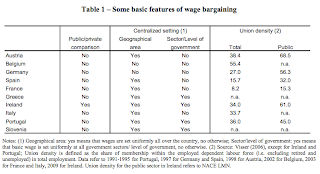 The summary of the premium evolution is provided here: 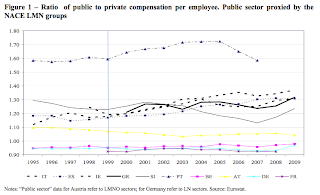 In the chart above, Ireland has the second highest gap after Portugal.

The paper provides a reminder of a number of studies that have examined the public-private sector wage gap in Ireland: 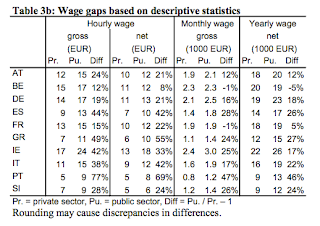 The ECB research provides controls for a number of variables that can theoretically explain diferences in pay between public and private sector, such as education as skills proxy and gender,  earnings groupings by percentiles,  and firm size. All are found to retain statistically signifcant public sector earnings premium in the case of Ireland.

The study also looks at one specific category - Education. "On average workers in “Education” earn much higher wages with respect to workers with similar characteristics in the private sector relative to workers in the other sub-sectors, while workers in the “Health” sector are less at advantage, and as in the case of Germany even at disadvantage with respect to their private sector counterparts. This finding is confirmed on the basis of a formal statistical test..." 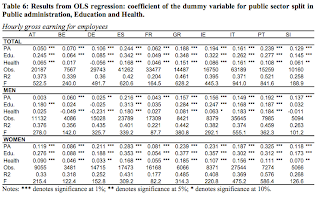 And the premium holds when controlling for workers' own education: 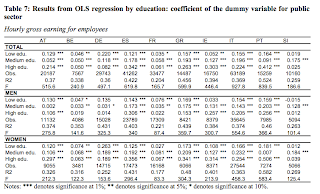 So overall, the study finds that: "A large body of literature has analysed the issue using micro-data on single countries. Most of these studies find a differential in favour of public sector workers, even after taking into account some observable individual characteristics. As in the previous studies, our results, referring to the period 2004-2007, point to a conditional pay differential in favour of the public sector that is generally higher for women, for workers at the bottom of the wage distribution, in the Education and the Public administration sectors rather than in the Health sector. We also find notable differences across countries, with Greece, Ireland, Italy, Portugal and Spain exhibiting higher public sector premia than other countries. The differential generally decreases when considering monthly wages as opposed to hourly wages and if we restrict our comparison to large private firms."

There goes one of those "We are not Greece" comparatives that the Irish Government is so keen on. When it comes to pay premium in the public sector, we are in the Club Med (PIIGS) group after all.

Posted by TrueEconomics at 4:44 AM

So em, Constantin. What is your point? To continue to whip up the anti-public sector frenzy? My wages were cut twice since 2009, and I pay taxes and am affected by all the budget cuts everyone else has. Give it a rest!

Well, if you check again the text, there is very little from myself in it. So complaints to ECB, please.

But since you decided to go personal, let me make an assumption that you are a public sector employee.

If that assumption is correct, then:

My earnings were cut 3 times and currently are down about 40% pre-tax on 2007. Part of your 'cuts' was to cover only partially the pension benefits being paid out to public sector workers (which, incidentally, I opposed, since it is not your own pension that these added charges cover).

I have no pension guarantee and my own tiny private pension has been taxed with a new levy.

Your wages are costing me increasingly more in taxes and, yes, they ARE costing me, despite the fact that you also pay income taxes, because public sector taxes do not cover public sector wages. Your pension is costing me more as well.

And no, I do not get comparable services in exchange for what I pay in taxes. I pay for my kids education, I buy my own health insurance, and I pay for all of this in taxes too. I barely drive and I do not use public transport except when I travel around the country, which is on average 1-2 times per month.

When you retire - you will have assured future courtesy of your contract and your pension will be well in excess of what you paid in for. I will have no pension and no secured future despite my taxes part-subsidizing your pension (yes, because unlike yourself, I will be forced to work past my 65 years of age).

But, hey, let the personal not distract us from the core issue at hand - even the ECB research shows that, objectively, data does not lie - you and your counterparts are earning a nice premium over of similar skills and responsibility working in the private sector. And that is before we factor in pensions.

Incidentally, as you can see, even on this blog there is a disparity between private and public sector. Analysis you read here is delivered to you free of charge by me. And yet, as a taxpayer, I have to pay for similar analysis (of much lower quality, often) to be provided by state employees.

So let's not get all worked up about this "What's your point?" My point is - change will happen, not because you want it or I call for it, but because the public 'services' we have are bust. Insolvent. And there is no money in the country left to 'repair' them the Croke Park-style.

Well said Constantin.
Unfortunately, human nature being what it is, no one likes to think they are overpaid. And so many of our government employees have never worked in the private sector and depend only on self serving trade union propaganda for their perspectives.

The worst part of this 30%-50% structural premium (taking super gold plated pension benefits into account) is that it allows the ECB to hold Ireland hostage we need their money for current government spending which is given ONLY on condition that we continue to bail out our BANKRUPT private financial institutions to protect German and French private financial institutions they owe money to.

We need to declare a national emergency, cut government spending by 30% IMMEDIATELY and tell the ECB where to go. This may seem radical but as Herbert Stein said "If something cannot go on forever, it will stop." so this will happen in the end. Sadly I see so many entrenched vested interests that this may entail much grief.
Mark

I appreciate that you are paying a large amount of taxes. However many of your assumptions are not true. I pay 520.47 in monthly required contributions for pension. Should I not derive some benefit from that?

I pay for my own health insurance as well. There are no other benefits offered other than pension. Many multi-national private companies pay for health, dental and all kinds of perks.

I am not trying to be personal, but I am tired of all the anti-public sector frenzy.

I took a huge paycut when I joined the public service in 2006. Though I did receive increases, they've now all been taken away. Should I not be compensated somewhat fairly for 25 years experience and having to pay for my own university education abroad to qualify me in my field? My wages are probably now what they were in the year 2000.

I am not a life-long public sector employee. 5 and 1/2 years actually.

It is unclear whether my retirement age will be raised to 67.

So please don't assume we are all senior public servants with huge pensions. I'm not attacking you personally, but trying to make you better informed to counteract the mis-information against the public sector in the media.