This is an unedited version of my Sunday Times article for December 18, 2011.


Last week’s EU Summit was billed as offering long-term solutions to the fiscal stability in the euro area and setting out the tools for dealing with the immediate threats. Just a week after the summit, however, the euro zone finds itself in the midst of an ever-deepening crisis once again.

This, of course, is a logical conclusion to the meeting that not only failed to present any new measures, but went on to undermine credibility of the previously deployed solutions, such as the EFSF, the ESM, Private Sector Involvement in bondholders haircuts in Greece, the expanded IMF engagement in lending to the euro zone member states, and the ECB deployment of aggressive quantitative easing programmes.

Let’s take a look at the hard numbers that emerged from the summit.

Post-July 2011 plan was to enhance EFSF lending capacity to €1.5-2 trillion either by raising new funding or by running €500 billion EFSF concurrently with €1 trillion ESM. Post-December summit we have: no increase in EFSF, no concurrent schemes and a vague promise of a €1 trillion target for ESM. This means that the effective lending capacity of the long-term funds in euro zone will be less than one half of what was expected.

That, of course, assumes that EFSF and ESM will carry on borrowing under AAA rating status and that funding markets will be receptive to new issuance of debt. The former is now jeopardized, courtesy of the summit failure, leading to France downgrade. The latter has been under severe questions for weeks now, since the EFSF failed to raise €3 billion in the last auction earlier this month. In fact, things are now so desperate, that this week EFSF was forced to issue 91 days bills. A fund that is lending under 7.5-10 year mandate now runs short term funding schemes that imply a massive maturity mismatch risk.

In order to by-pass ECB’s statutory restriction on financing the member states, for months prior to the December summit, EU leaders were voicing the idea of lending funds to the IMF so that the IMF can re-lend these same funds, leveraged ca 4-5 times back to the euro member states. This too now appears completely out of reach. Following the summit, the US, Canada and Japan stated unequivocally that they will not support targeted funding by the IMF. In addition, Russia, Brazil, China and India have in the past said no to matching euro area loans, meaning that the scheme cannot come into existence as a general fund allocation. Of course, in all the excitement surrounding the Summit, everyone forgot to ask a simple question – where will the EU governments find the said €200 billion if they can’t raise the money to fund the EFSF?

Private sector participation in Greece – the cornerstone of the July and October 2011 summits – was also put to gather dust this week. Firstly, the European Banking Authority clearly stated that efforts to-date to agree such ‘voluntary’ participation have come short of the required target of 90% of foreign bond holders. Secondly, in the 5th review of Greece’s progress under the lending programmes, the IMF team in Athens concluded that: “There are yet significant risks ahead for the [Greek] authorities’ program, including …the possible failure to agree with creditors on a PSI deal, leading to a non-voluntary outcome.” And furthermore, despite having engaged in planning PSI operations since June 2011, after six months of haggling and planning by the EU, “… the specific details of the operation remain to be finalized …” The sums involved are hardly insignificant. October 26 summit – up to 1/4 of the entire EFSF once banks recapitalization measures are included. Absent full implementation of PSI, Greece will be insolvent vis-à-vis IMF, triggering a mother of all defaults.

Last, but not least, the hopes of the ECB riding into the battle with direct quantitative easing were cindered by Frankfurt. Following the summit, ECB decision makers were quick to state that direct assistance to the member states and expanded bonds purchases were not consistent with the ECB statutes and strategy. Of course, no open market operations – no matter how large – could have been sufficient to deal with the crisis. To-date, ECB balancesheet of loans to sovereigns (via direct purchases of Government bonds) and euro area banks has swollen dangerously close to €1 trillion. And, yet, this had virtually no real long-term effect on the crisis dynamics.

Adding insult to the already grave injuries, the Summit precipitated two new crises in Europe – a political one and an economic one. The former is manifested in the legal problems surrounding formulation, passing and enforcement of the new Fiscal Pact. But these are legal and political problems so let us focus on the economic ones.

Even for the deficit hawk like myself, the Fiscal Pact is equivalent to an economic suicide. The Pact formula of 3%-0.5%-60% is a combination of the already failed Stability and Growth Pact targets enriched with the lethally obscure and totally unattainable 0.5% structural deficit limit.

Between 1990 and 2008 – in other words, before the crisis hit – Ireland was able to satisfy the 0.5% structural deficit target only once in very 10 years, same as Belgium, Germany and the Netherlands. Austria, France, Greece, Italy, Portugal and Spain never once satisfied this criterion. Two best performers in the euro area – Malta and Finland have met the target in 6 out of the 19 pre-crisis years. In terms of 0.5% structural deficit rule, all member states, except Germany will require further austerity measures.

For Ireland, a longer-term expected slowdown in growth over the next 10 years compared to previous two decades will mean that it will be even harder to stick to the target for the structural deficit, as we see reduction in the potential growth rates going forward.

Ireland fared much better as far as the 3% standard deficit goes, satisfying the criteria in all but 1 year. The same does not hold for other euro area states. France has failed to meet the target in more than 5 out of 10 years, as did Spain; Italy in more than 7 in each 10 years; Portugal and Germany more than 4; Greece – never once. And looking forward, under rather rosy IMF September 2011 projections for 2012-2013, Belgium, Cyprus, France, Greece, Ireland, Slovenia and Spain will require even more austerity than already planned to comply with 3% deficit rule. 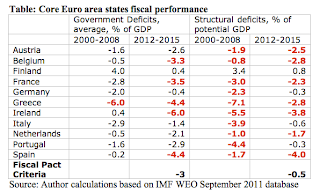 For Ireland, complying with the 3% rule will require the deepest additional adjustments in the euro area, while complying with the 0.5% structural deficit rule will need second largest adjustment. In fact, this week, Sen. Sean Barrett, a TCD economist proposed a bill that aims to bring about a more open and transparent approach to the public finances and stresses the overall significance of the structural deficits rules for Ireland.

Messrs Kenny and Noonan have signed off on the deal that will be the costliest to Ireland of all other states, disastrous to our economy in its current condition and, given the legal issues surrounding its enforceability for countries not in debt to the Troika, also pretty much useless for the EU at large.

The second point of weakness in the Irish Government position with respect to the new Pact relates to the implicit Government support for the Financial Services Transactions Tax (FSTT). Empirical evidence firmly shows that Tobin-styled taxes in financial services, when effective in reducing the speed and volume of transactions, have to be prohibitively high, impacting more adversely secondary financial services centres, like Dublin IFSC and benefiting offshore locations and jurisdictions that fall outside the new tax net. In summary, Tobin tax can lead to less transparency, more tax evasion and lower economic growth across the EU. James Tobin himself argued against the blanket introduction of his ideas in later years.

By agreeing to the new Pact without as much as voicing a threat of the veto over the FSTT, the Irish Government has signed a long term death warrant to Dublin's competitiveness in front-office international financial services - the highest value added segment of the sector and one of the best performing areas of Irish economy in recent years, including during this crisis.

On the net, as the direct result of the Summit failures, the probability of the Euro zone exits for Greece, Portugal, Ireland and Belgium has risen. At the same time, the sustainability of public finances in Italy, Spain and France is now in doubt as Fiscal Pact is likely to result in a reduction in the potential growth rates for Span and France and no increase in future growth for Italy. Likewise, the probability of Irish fiscal adjustment path must be questioned, especially since the Pact will depress our longer term growth rates, that are already, barring the Pact introduction, less than spectacular.

It is thus, that the Government deficit of leadership has finally contributed to a bitter failure at the EU policy level. Contagion has spread from all matters economics and financial to the heart of politics in Europe.

Breaking up the doom-and-gloom newsflow that dominates our everyday reality, last month’s high level Irish delegation trade visit to Russia, headed by Tanaiste Eamon Gillmore, yielded some encouraging progress on the longer-term bilateral trade and investment policies development front. Since 1976, Irish and Russian authorities have been in somewhat infrequent and irregular dialogues on these issues under the umbrella of the Joint Economic Council. Last month, for the first time ever both sides agreed to set up sector-specific working groups with regular reporting and strict annual targets for deliverables. Given that Irish exports to Russia are set to grow 40% plus this year, having 52% in 2010, while Irish trade surplus with Russia is about to expand by 150% in the last 2 years, this is a truly welcomed development. In 2010, Irish trade surplus with Russia was €465 million ahead of that with China, €352 million ahead of trade balance with India and €119 million greater than the trade surplus with Brazil.