Ok, folks, RTE is shouting "Biggest Retail Sales Rise Since March" (see link here) but you do know to turn to this blog to see the real numbers. So here are the updated charts and historical trends and some analysis.

It is worth noting that my Retail Sector Activity Index for October has predicted this uplift:
"A large jump in consumer confidence in October (to 63.7 from September reading of 53.3) is the core driver of improvement in the  overall Index od Retail Sector Activity, which now stands at 102.2 - above the expansion level of 100. This means that we can expect a small uplift in retail sector activity in months ahead, but this uplift can manifest itself through improved volumes of sales (value static, so margins declining) or improved value of sales (inflation) or both (more demand-driven uplift)."
Please note that below analysis exactly confirms the above predictions.

However, this does not mean that I share with the RTE headline excitement about the actual sales indices performance in November 2011. Here's why:

First of all - general retail sales (including motors), seasonally adjusted: 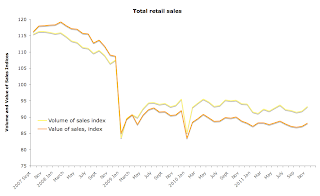 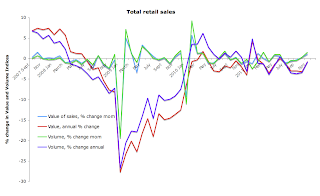 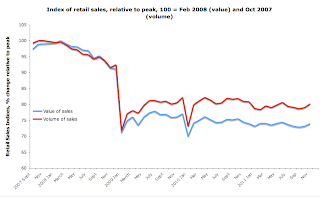 Frankly, I am not seeing anything that jumps out on an extraordinary scale. Some uplift, most likely supported by the decline in foreign travel for shopping and by better weather conditions this year than in 2010, but hardly spectacular. Only notable increases yoy are in Non-specialized stores ex-Department Stores (where inflationary pressures drove value up 1.4% while volume was up only 0.5%), Fuel (where inflation was so rampant that value of sales rose 10.3% while volume of sales fell 3.7%) and Electrical goods (where season sales started early and cuts were running deep with value +0.5% and volume up 7.5% yoy). everything else was either down or flat. You tell me if this is something that we can cheer about?

Let's take another look at the pure index numbers:

So adjusting for motors sales, core retail sales indices were: 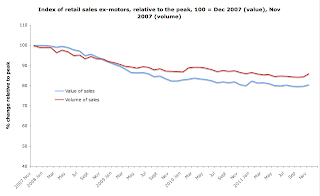 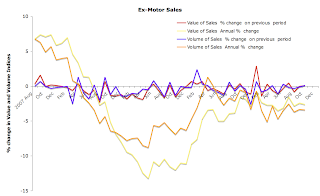 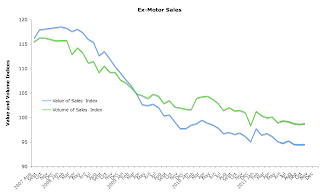 Oh, and as an aside, here are the comparatives in retail sales volumes across Ireland, EU17 and EU27 (data reported with a monthly lag here, so latest we have is for October sales): 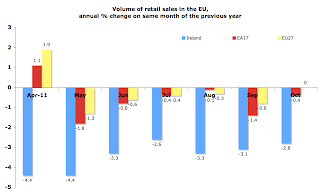 Posted by TrueEconomics at 2:25 PM