Yes, yes, folks, I know, we have a plan. It's the plan to pay our debts (well, at least Government debts) from our 'exports-led growth'. We even had foreign experts telling us that we can do it - coming down from the Continent with lectures full of graphs and sums.

In reality, of course, the plan is a porky. We have booming trade in goods which is slowing down on growth rates, but remains pretty healthy. We have trade in services - that is not reported by the CSO in monthly series. That is in a deficit. Then there are other so-called 'invisibles' that are negative as well (see below). On the net, in 2010, our 'external surplus' measured by trade alone, including the invisibles (current account) was just €761mln. But then we have to add capital account - the inflows and outflows of capital - and that gives us the full external surplus - the Balance of payments bit - of a whooping debt-busting... €88 million.

Let's run through those figures... shall we?

Merchandise trade balance in Q3 2011 stood at €9,862mln or 6.9% ahead of Q2. Year on year, however, trade in goods shrunk 1.02% and for the first 9 months of 2011, trade balance in goods was 2.78% behind the same period of 2010. In other words, not a spectacular development so far in our strongest exporting sector. Certainly not what we would expect if we were to reach that 4.3-5.8 targets various Government documents set out for exports growth in 2011.

Adding up trade balance in goods and invisibles yields current account surplus of €850mln in Q3 2011. But for the 9 months of 2011, cumulated current account stands in a deficit of €669mln, not a surplus. And compared to same period 2010 this deficit in an improvement of €125mln.

Charts below illustrate the trends on the annual basis, providing forecast for 2011 based on data through September. 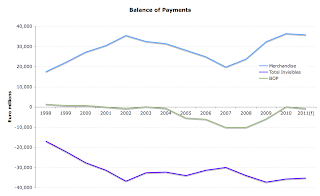 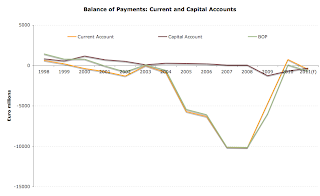 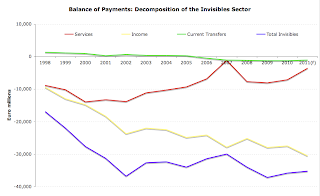 So let's ask that uncomfortable question: Can external surpluses get us out of the debt jail? table below sums up cumulated external accounts balances for 1998-2011(forecast).

Yep, that's right. Suppose we want to pay down original €100bn of government debt out of the external surpluses consistent with the booming exports trade of 2009-2011 and we take the best quarterly performance for each metric of the external balance. Suppose we assume that debt is financed at 3.5% perpetually. How long will it take Ireland to half its current debt exposure? Roughly speaking - 64 years based on trade balance (current account surpluses) and 85 years based on full balance of payments.

And the above does not factor in any current or future slowdowns in trade etc. Just based on our best performance, with exports at boom levels and imports permanently shrunk, we still cannot count on that magic bullet of 'external trade will save us' from the debt overhang.

So that Plan for External Surpluses as a vehicle out of our debt jail... well it's sort of: 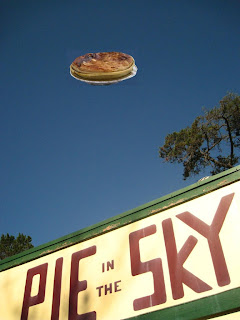 Posted by TrueEconomics at 11:15 AM