The unedited version of my Sunday Times article from December 11, 2011.


Billed as the Budget that will fundamentally change our fiscal policy over the long-term, the documents released this week have managed to make history. Indeed, Budget 2012 was a record-breaking one in three ways.

Firstly, Government’s retreat over the issue of disability payment cuts for the younger beneficiaries has to mark the fastest policy reversal ever achieved by the State. Secondly, by labelling new revenue measures in health services as expenditure cuts, Minister Howlin has managed to perform a minor miracle of transfiguration – transforming sweat and labours of ordinary insurance card holders who will now pay higher services charges into a Public Sector reform.

Thirdly, the Government set another speed record that will be hard to match. Within just 9 months after coming to power, the Coalition has magically morphed into a Fiana Failesque clone, replete with Bertie-style creative thinking which equates economic growth with property incentives.

The 2012-2015 profiling of spending and tax measures, released by the Department of Finance clearly shows that this Government has adopted Brian Cowen’s approach to crisis management. Tax measures are frontloaded into 2012 and 2013 at €2.85 billion out of the total €4.65 billion. The bulk, or €5.55 billion, of the spending cuts out of the total of €7.75 billion were delayed until 2013-2015. Within spending reductions planned, capital cuts are frontloaded into 2012-2013, while current spending reductions are pushed back. In other words, the Government is delaying the painful reforms in a hope that something turns up to rescue the Exchequer revenues. 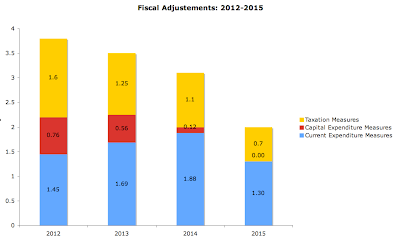 This much is clearly reflected in the Department of Finance’s overly optimistic outlook for growth. The Budget estimates appear to reflect the Department November 2011 forecast for 1.6% 2012 growth in GDP. Subsequent revision downward to 1.3% projected GDP growth in 2012, revealed on Tuesday, seems to be a window dressing to suggest caution as they clearly were introduced sometime around December 5th and 6th – with no time alter core budgetary estimates. Afterall, the Department Monthly Economic Bulletin, released this Monday continues to project 2012 growth at 1.6%. Even at that, the Department projections exceed most recent forecasts by the ESRI (0.9% GDP growth) and OECD (1.0% growth).

Past 2012, medium-term projections envision 2014-2015 growth coming in at a lively 3.0% per annum, boosted by booming exports and investment assumptions. Balance of payments, the metric that reflects economy’s overall ability to generate external growth, will skyrocket more than seven-fold from 0.5% this year, to 3.7% in 2015.

The country drowning in the sea of middle class debt, collapsed domestic investment, crashed consumption, rampant emigration, skills drain due to excessive taxation and exploding growth in the black markets, in the view of the Department of Finance economics experts will shrug off the depression and get back to the business of filling Government’s coffers with cash.

The Government that is concerned with deposits stability in the Irish banking sector and talks about the need for investment is frontloading capital cuts and has introduced three measures on DIRT, CGT and CAT that will do exactly the opposite of what it tries to achieve. The Government that incessantly drones about jobs creation has managed to publish a budget that will further depress investment, reduce disposable incomes and increase costs of doing business in this country. To make things worse, the Budget also made hiring workers more risky by increasing the future cost of redundancies. With measures like these, the only jobs creation that will be taking place in Ireland for the foreseeable future is going to be taking place in the Fas-run schemes.

The Government that talks about exports-led recovery has managed to introduce not a single measure to help exporters. An exports credit guarantee scheme and ringfencing of new tax incentives for marketing Irish goods and services abroad would have helped. As would a scheme to encourage technical skills importation in the sectors where such skills cannot be found locally. None came.

On the expenditure side, the very same Government promising deep reforms loaded the Budget with small-scale measures that neither address the issues relating to the value-for-money in public services delivery, nor achieve substantive real savings, nor improve productivity in the sector.

Take one of the largest ‘reforms’ – the reduction in the numbers employed in the public sector. At 6,000 planned reductions in 2012, the target is un-ambitious. More importantly, it marks the very same ‘extend-and-pretend’ approach to change that is traceable across the entire Budget. Instead of taking the medicine upfront and setting a target at 12,000-15,000 reductions, the Government opted to increase uncertainty about future positions and promotions for those who stay in their jobs. The fact that even the shallow target is to be achieved solely through early retirement adds insult to the injury. Early retirement schemes solemnly lack any connection between employees’ suitability for their jobs, their performance on the job, and other meritocratic metrics. As the result, early retirement schemes will not enhance overall levels of productivity in the workforce.

Minister Howlin, and with him the rest of the cabinet, simply appear to be unaware of what reforms are supposed to achieve. What is really needed is a comprehensive independent review of all positions across all departments and subsequent involuntary removal of those who are unsuited for their jobs.

There is also no joined-up thinking on welfare system reforms. For example, introducing a refundable tax credit per child at a mid-range rate of, say, 20%, would make the credit automatically means-tested. This would also make the scheme virtually self-administered for the majority of the recipients and allow to focus more resources on the cases where special help is needed most.

There is a virtually hit-and-run feel to the Government’s grasp of what constitutes long-term change. At this stage in the crisis, it is clear that sooner or later, the sacrosanct basic rates of social welfare as well as the unlimited nature of benefits will have to come to the chopping block. There is no economic growth path that can get us out of this painful corner.

Yet, instead of tackling the problem head on, the Government attempted once again to move along the margins, selecting individual sub-groups of aid recipients in a hope of ‘striking gold’ – finding the least vociferous ones for the hit. This is done in a naïve belief that the loudness of the group complaints is somehow proportional to the need for assistance. The end result is that those most in need, but are present in smaller numbers, got the stick, while the able-bodied adults with lesser merit claim to help are getting their carrot.

There are no reforms of the public sector pay and pensions in the Budget. The gargantuan bill for new and existing state retirees will fall this year by just €500,000 and is expected to decline by less than 2.3% in years ahead.

With social welfare fraud rampant Minister Joan Burton cheerfully reported back in August this year that her Department delivered €345 million worth of savings tightening enforcement of the welfare payments in just 7 months of 2011. Why is then Budget 2012 aiming to generate just €41 million in new fraud reduction-related savings for the entire 2012?

Despite the rhetoric, Budget 2012 was another windows-dressing for avoiding painful reforms. The new curtains of ‘austerity’ will now adorn the rotten façade of state finances until the whole structure crumbles over the next 2 years under the weight of our debts and structural recession.

Back in July 2010, the Minister for the Environment published a relatively un-ambitious Report of the Local Government Efficiency Review Group. The report reviewed the cost base, expenditure of and the numbers employed in local authorities in Ireland. It identified some marginal savings to the tune of €511 million comprised of €346m in efficiencies and €165m in improved cost recovery and revenue raising to be gained from introducing very moderate set of reforms, such as joint administrative areas for some sets of counties; reductions in senior management and other staffing levels; greater efficiency in procurement; more use of shared services, such as joint inspectorates and regional design offices; and better financial management. None of these suggestions have made it into specifically costed savings under the Budget 2012. Which begs a simple question – why?

Posted by TrueEconomics at 8:19 AM

constntine, you were on fire on sunday morning and tueday night on two radio programmes,fantstics.

It's terrible that the reform in public sector is not tackled until Croke Park comes up for renewal. Will there be anything left in the country to make a deal over? All these extra taxes just to allow waste.