In the wake of the European summit, it's worth taking a look at historical and projected future performance of the member states of the Euro area based on the parameters for fiscal sustainability. 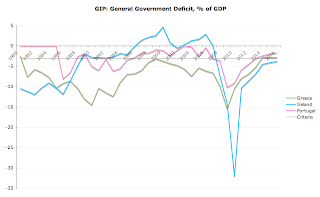 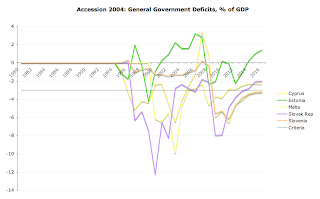 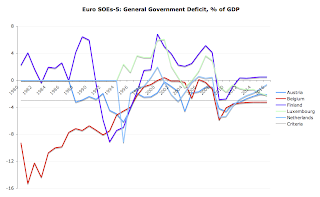 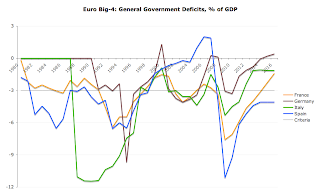 And a plot of all instances when Euro member states have fallen outside the 3% deficit sustainability criteria: 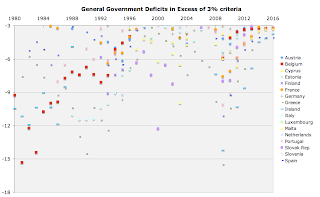 Let's summarize the above evidence: 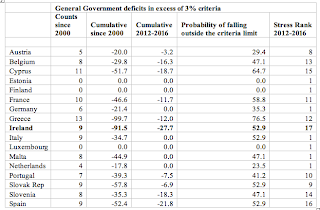 As can be seen from the above, by the 3% deficit criteria, between 2000 and forecasted 2016,  only two states will have been in full compliance with the fiscal rule: Luxembourg and Estonia. Only two more state, Austria and the Netherlands, will see probability of falling outside the sustainability criteria below 30%. Seven Euro area states will have probability of not satisfying this criteria in excess of 50%. It is also evident, based on the IMF forecasts, that Ireland, Spain, Cyprus, Slovenia Belgium, Greece and France will have an uphill battle satisfying this criteria between 2012 and 2016. Ireland is by far the worst performing state in terms of required future adjustments with cumulative reductions required of 27.7% of GDP, followed by Spain with 21.8%.

Now, let us consider the 0.5% of potential GDP bound for structural deficits: 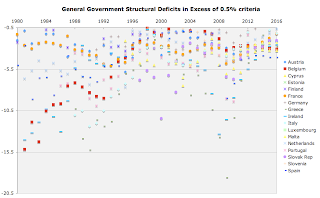 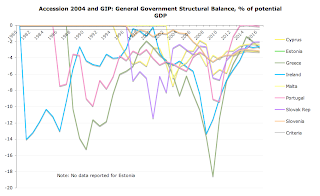 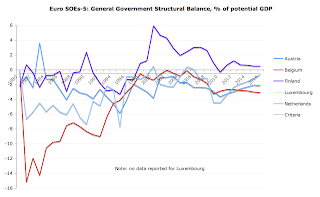 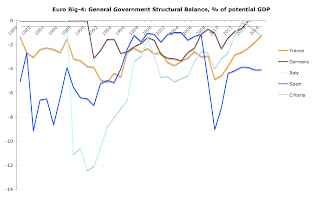 To summarize the above: 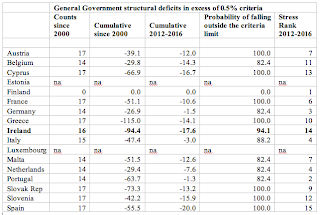 As shown above, with exception of Finland, no member state of the Euro area has been in compliance with this rule since 2000 through (forecast) 2016. The numbers for expected future adjustments required under this rule for 2012-2016 are horrific. Spain is the worst off country under this criteria, followed by Ireland, Cyprus and Slovenia. Things are also gloomy as the future adjustments go for all other countries, save Germany and, irony has it, Italy (due to the country lack of any growth potential), Netherlands and Portugal (same case as Italy).

In short, there is no real evidence that the Euro area can deliver on the targets set without

Posted by TrueEconomics at 10:26 PM