Here is the unedited version of my article in the Sunday Times, November 27, 2011.

Since the collapse of the bubble, Irish perceptions of the residential and commercial property markets have swung from an unquestioning adoration to a passionate rejection.

As the result of the bubble, the overall share of property in average household investment portfolio is likely to decline over time from its Celtic Tiger highs of over 80% to a more reasonable 50-60%, consistent with longer term averages in other advanced economies. But housing will remain a significant part of the household investment for a number of good reasons.

While providing shelter, housing wealth also serves as a long-term savings vehicle and an asset for additional borrowing for shorter-term investments. Security of housing wealth in normal times acts as an asset cushion for family-owned start up businesses and a convenient tool for regular savings. Over the lifetime, as demand for housing grows with family size, we increase our savings, normally just as our life cycle earnings increase. We subsequently can draw down these savings throughout the retirement when income from work drops.

In short, in a normal economy, housing and household investment are naturally linked. In this light, the grave nature of our economic malaise should be apparent to all. Ireland is experiencing a continued and extremely deep balance sheet recession, with twin collapses in property prices and investment that underlie structural demise of our economy.

The latest Residential Property Price Index, released this week, shows that things are only getting worse on the former front. Overall, residential property price index fell to 71.2 in October from 72.8 in September. The latest monthly decline of 2.2% is the sharpest since March 2009 and the third fastest in the history of the index. Relative to peak prices are now down 45.4%. Take a look at two components of household investment portfolios: owner-occupied and buy-to-let properties. For the majority of the middle class families, the former is represented by a family home. The latter, on average, is represented by apartments. Nationwide, per CSO, prices of these assets are respectively down 43.7% and 57.9% relative to the peak. 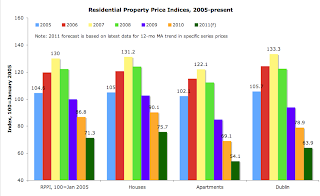 The impact of these price movements is significant and, contrary to the assertions of the Government and official analysts, real and painful. House price declines imply real capital losses to households and these losses have to be offset, over time, with decreased consumption and falling investment elsewhere. Absent normal loss provisioning available to professional financial sector investors and businesses, households suffer catastrophic collapses on the assets side of their balance sheet, while liabilities (value of mortgages) remain intact. Decades-long underinvestment and low consumption spending await Ireland.

Dynamically, things are not looking any brighter today than a year ago. House prices have fallen 14.9% year on year in October, the worst annual drop since February 2010. Apartments prices are down 19.8% over the last 12 months – the worst annualized performance since April 2010.  Given the price dynamics over the last three years, as well as the current underlying personal income, interest rates and rental yields fundamentals, Irish property prices remain at the levels above the short-term and medium-term equilibrium. This means we can expect another double-digit correction in 2012 followed by shallower declines in 2013.

Not surprisingly, the collapse of the property markets in Ireland is mirrored by an even deeper crash in overall investment activity in the economy. The latest National Accounts data shows that in 2010, gross fixed capital formation in Ireland declined to €19 billion in constant prices. This year, data to-date suggests that capital formation will drop even further, to ca €17 billion or almost 58% below the peak levels. In historical terms, these levels of investment activity are comparable only with 1996-1997 average. If we assume that the excess investments in the property sector were starting to manifest themselves around 2002, to get Irish economy back to pre-boom investment path would require gross fixed capital investment of some €26.9 billion per annum or more than 60% above current levels.

Between 2000 and 2009, Irish economy absorbed some €319 billion in new fixed capital investments. Assuming combined rate of amortization and depreciation of 8% per annum, just to keep that stock of capital in working shape requires €25.5 billion of new investment. This mans that in 3 years since 2009, the Irish economy has lost some €15.5 billion worth of fixed capital to normal wear-and-tear. In short, we are no longer even replacing the capital stock we have, let alone add new productive capacity to this economy.

Looking into sectoral distribution of investment, all sectors of economic activity outside building and construction have seen their capital investment fall by between 18.4% in the case of Fuel and Power Products to 70.4% in the case of Agriculture, Forestry and Fishing sector. So the aforementioned aggregate collapse of investment is replicated across the entire economy.

The dramatic destruction of capital investment in the private sector is not being helped by the fact that Government capital expenditure is also contracting. In 2010, Voted Capital Expenditure by the Irish Government declined to €5.9 billion. This year, based on 10 months through October data, it is on track to fall even further to €4 billion – below the target of €4.35 billion and more than 53% below the peak. In fact, the entire adjustment in public expenditure to-date can be attributed to the capital spending cuts, as current expenditure actually rose over the years of crisis. Since 2008, current expenditure by the state is up 1.9% or €775 million this year, based on the data through October. Thus in 2008, Irish Government spent 17.4% of its total voted expenditure on capital investment. This year the figure is likely to be under 8.8%.

Forthcoming Budget 2012 changes are likely to make matters worse for capital investment. In addition to taking even more cash out of the pockets of those still in employment – thereby reducing further the pool of potential savings – the Government is likely to bring in the first measures of property taxation. This will reinforce households’ expectations that by 2013-2014 Ireland will have a residential property tax that will place disproportional burden on urban dwellers – the very segment of population that tends to invest more intensively over time in property improvements, making the urban stock of housing more economically productive than rural. A tax measure that would be least distorting in terms of incentives to increase productivity of the housing stock – a site-value tax – now appears to be abandoned by the Government, despite previous commitments to introduce it.

Furthermore, we can expect in the next two years abolition of capital tax reliefs, increases in capital tax rates and high likelihood of some sort of wealth taxes – direct levies on capital and/or savings for ordinary households. In the case of the euro area break up, Ireland will also see draconian capital controls.

In short, we are now set to experience an 8-10 years period of direct and accelerating destruction of our capital base. It doesn’t matter which school of economic thought one belongs to, there can be no recovery without capital investment returning back to growth.

In the recent paper titled “The Eurozone Crisis: How Banks and Sovereigns Came to Be Joined at the Hip”, published last month, two IMF researchers identify Europe’s Lehman’s moment in the global financial crisis as the day when the Irish Government nationalized the Anglo Irish Bank. In contrast to the current and previous Governments’ assertions, the IMF study argues that the Anglo was not a systemically important bank worthy of a rescue. As the paper puts it: “The problems [of collapsing financial sector valuations] entered a new phase – becoming a full-blown crisis – with the nationalisation of Anglo Irish in January 2009. The relevance of Anglo is, at first, not obvious, since it was a small bank in a relatively small country. However, …it is possible that the large fiscal costs as a share of Ireland’s GDP associated with this rescue raised serious concerns about fiscal sustainability. Suddenly, the ability of the sovereigns to support the financial sector came into question.” In other words, far from helping to avert or alleviate the crisis, Anglo nationalization caused the crisis to spread. “In retrospect, the nature of the crisis prior to Anglo Irish was simple, being mostly driven by problems in the financial sector… The winding down of Anglo Irish, for example, would have been preferable to its nationalization…” In effect, the previous Government made Anglo systemically important by rescuing it. If there ever was a better example of the medicine that kills the patient.

Posted by TrueEconomics at 4:47 PM