Data for external trade for Ireland for October 2011 is out (preliminary estimates) and the picture of the general slowdown in the economy in Q4 is now being confirmed in the exports sector. 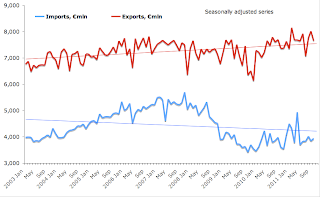 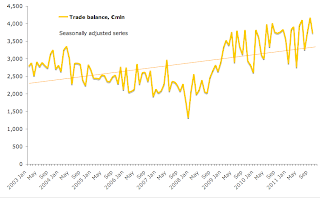 Note that the trade balance remains on the upward sloping trend and the sub-trend is both steeper and above the historical trendline, which is, obviously a very strong development. Imports continue to underperform below the trendline, something that we can expect to be corrected once capes returns to exporting sector and also as the euro depreciates (margins on transfer pricing shrinking).

Terms of trade improvements are now virtually exhausted (although the data here is through September, not reflective of the gains in terms of trade that are materializing out of the latest weakening on the euro). 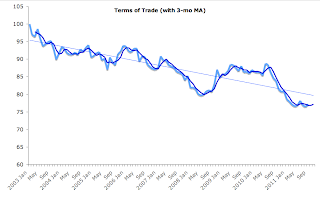 Mom terms of trade deteriorated by 0.7 index points of 0.92%, however, year on year Irish exporters are enjoying strong gains of 7.88% and relative to September 2009, terms of trade have improved 10.54%. (Note: in the chart above, improvement in terms of trade is reflected in the lower value of the index). 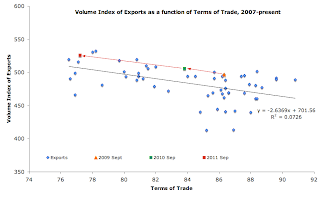 It's worth noting (chart above) that exports are responding to terms of trade improvements well ahead of trend for the third year in a row, consistent with increasing transfer pricing component in our trade. This picture is further confirmed by the increasing sectoral concentration of our exports in pharmaceutical and medical devices sectors.

Overall imports-intensity of exports - the ratio of exports value to imports value has risen in October, as index moved from 208.7% in September to 194.4% in October (-6.86%) and year on year there has been relatively similar deterioration of 4.9%. This compares against the historical average ratio of 156.0%, implying that currently transfer pricing is running at a higher rate than average. 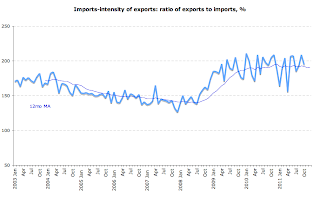 As noted earlier, imports are now rising faster than exports, reflective of cyclical stocks of inputs exhaustion and this can be a net negative going forward if the MNCs begin to see slowdown in new orders. In other words, as imports of inputs begin to outpace exports of outputs, stocks of finished goods will rise, implying that in the future, stocks of finished goods contribution to GDP will shrink, unless new orders take these stock out. 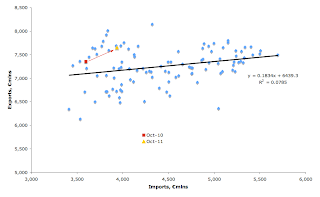 Despite good performance, seasonally adjusted trade flows are suggesting some troubles ahead for the trade balance. Annualized data based on previous years monthly series generates the forecast for Irish imports of €48.53bn in 2011 (+5.98%yoy against average annual contraction in 2008-2010 of -9.85%) and exports at €91.41bn (+2.42% yoy - well behind the target of 4.3% and well behind 2010 annual gain of 5.26%). This implies the forecast trade surplus of €42.89bn or some 1.35% less than in 2010. The crucial point for the GDP is how much stock build up activity we are going to see in November-December. And for GNP, the added critical issue is whether the MNCs will accelerate their profits expatriation or not. 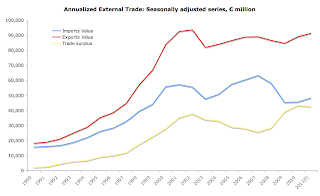 Overall, there are signs (albeit still relatively weak) of the slowdown momentum building up in exports.
Posted by TrueEconomics at 5:17 PM