There's been much talk about the fiscal union and ECB money printing as the two exercises that can resolve the euro area crises. The problem is that all the well-wishers who find solace in these ideas are missing the very iceberg that is about to sink the  Eurotanic.
(image courtesy of the ZeroHedge.com):

Let's start from the top. Euro area's problem is a simple one:

Oh, and in case you think that discipline is a cure to debt, here's the austerity-impacted expected Government debt changes in 2010-2013, courtesy of the OECD: 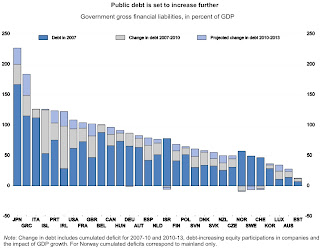 In other words, it's not the lack of monetary easing or fiscal discipline, stupid. It's the lack of dynamism in European economy.

Let me explain this in the context of Euro area policies proposals.


So while Europe believes that its core malaise is lack of confidence from the markets, I believe that Europe's real disease is lack of growth and resulting high debt levels. Confidence is but a symptom of the disease.


You can police fiscal neighborhood as much as you want (and some policing is desperately needed), but you can't turn European economy from growth slum to growth engine by doing so. You can also let ECB buy all of the debt of the Euro area members, but short of the ECB then burning the Government bonds on a massively inflationary pyre, you can't do away with the debt overhang. Neither the Euro-bonds (opposed by Germany) nor warehousing these debts on the ECB balance sheet (opposed by Germany & the ECB) will do the trick. Only long-term growth can. And in that department, Europe has no track record to stand on.

Take Italy as an example. Charts below illustrate the country plight today and into 2016. I use two projections scenarios - the mid-range one is from the IMF WEO for September 2011, the adverse one is incorporating OECD forecasts of November 2011, plus the cost of funding Italian debt increasing by 100bps on the current average (quite benign assumption, given that it has increased, per latest auctions by ca 300bps plus).

As chart below shows, Italy is facing a gargantuan-sized funding problem in 2012-2016. Note that the time horizon chosen for the assessment of fiscal sustainability is significant here. You can take two assumptions - the implicit assumption behind the Euro area policy approach that the entire problem of 'lack of markets confidence' in the peripheral states can be resolved fully by 2013, allowing the peripheral countries access to funding markets at costs close to those before the crisis some time around 2013-2014. Or you can make the assumption I am more comfortable with that such access to funding markets for PIIGS is structurally restricted by their debt levels and growth fundamentals. In which case, that date of regaining reasonable access to the funding is pushed well past 2015-2016. 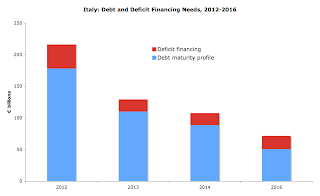 Government deficits form a significant part of the above debt problem in Italy (see below), but what is more important is that even with rosy austerity=success model deployed by the IMF, the rate of decline in Italian public debt envisioned in 2013-2016 is abysmally small (again, see chart below). This rate of decline is driven not by the lack of austerity (deficits are relatively benign), but by the lack of economic growth that deflates debt/GDP and deficit/GDP ratios and contributed to nominal reductions in both debt and deficits. 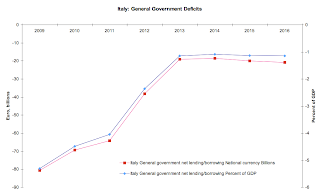 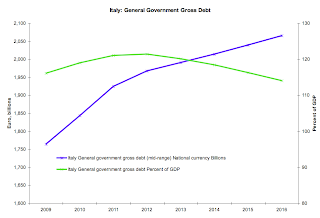 But the proverbial rabbit hole goes deeper, in the case of Italy. IMF projections - made before September 2011 - were based on rather robust euro area-wide growth of the first quarter of 2011. Since then two things have happened:
These two factors, imperfectly reflected in the forecasts yield my estimation for Italian fiscal sustainability parameters under the 'adverse' scenario. 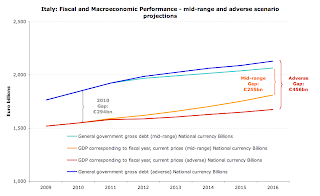 The above shows why, in the case of Italy, none of the solutions to the crisis presented to-date will work. Alas, pretty much the same applies to all other peripheral countries, including Ireland.

Which means that the latest round of euro area policies activism from Merkozy is simply equivalent to administering wrong medicine in greater doses to the misdiagnosed patient. What can possibly go wrong here?
Posted by TrueEconomics at 9:46 AM

What about EFSF/ESM programs? Surely these will include structural reforms. Certainly if the IMF becomes directly involved thay will demand structural reforms -would that not be a mechanism for Italy and the other troubled countries to escape the crisis through growth?

In Ireland for instance, at the insistence of the Troika we have begun to act to reform sheltered professions. When/if these reforms proceed, surely this will have a positive growth impact.

Furthermore, in some of the Southern countries there are substantial state assets that can be used to reduce debt burdens.

So there are ways of reducing debt and stimulating growth while the ECB bridges us over this period. But of course it will all be for nothing if politicians subside back into inactivity once the ECB becomes active.

Who is the next TBTF sovereign?

Spain - with massive youth unemployment, banks that havent even marked to market their junk asset portfolios and when they do will require massive recaps - back to the bond market for that? (i dont think so)

France - the great pretender - a complete mess hiding under the radar until a bank failure reveals all.

Germany - Surely not - until you examine their debt to gdp ratios.

You couldn't make this up.

It's nice that somebody finally talks about the REAL dimension behind the Eurozone state deficit problems: Eurosclerosis.

If my (German) countrymen were a little brighter than they actually are, they would aggressively market the argument that Southerners (and maybe even Germany itself!) have to reshuffle their regulatory system, and not look for some new donors to keep sponsoring their wanton ways!